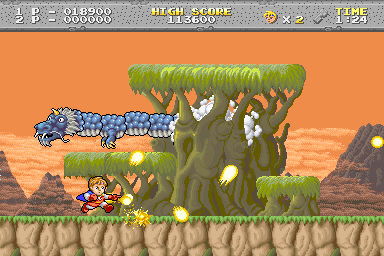 Legend of Hero Tonma is one of those ridiculously difficult arcade side-scrollers from Irem, continuing their traditional of previous games like Kid Niki: Radical Ninja and Ninja Spirit. This one stars a magician named Tonma (Tommy in the English version) as he travels through seven stages and adventures into the demon world to rescue a kidnapped princess.

The game itself somewhat resembles previous Irem games, right down to its fast-pacing and relentless flood of enemies, which give it a run-and-gun feel. Not only do mooks regularly flood the screen from both directions, but there are also numerous other enemies that take several hits to destroy, so you constantly have to juggle dealing with both of them while jamming on the fire button. You do have a fairly high (and rather floaty) jump that helps you take to the air to avoid them, at least, plus you can bounce on their heads, which won’t damage them but at least helps you avoid them. 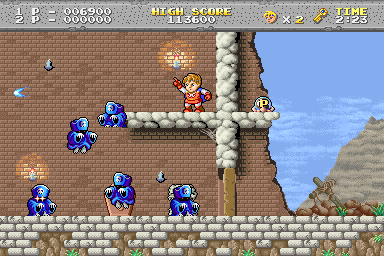 Tonma attacks by throwing fireballs literally with his fingers. By default, this isn’t too powerful, but by gathering power-up orbs, you can equip a fairly large number of magic spells, some of which work in tandem. Many of these are the type you’d typically find in shoot-em-ups, including homing attacks, fireballs that travel along the ground, or bombs tossed in a parabola. There’s also a fire shield that rotates around the hero, each flame of which individually absorb a projectile, though will also leave an opening for successive shots to penetrate.

This wide variety of magic is pretty much the only thing that helps mitigate the otherwise overwhelming challenge. The hero can only take a single hit before dying (he literally just flashes out of existence while his cape falls to the ground) and is sent back to an earlier checkpoint upon respawn. These typically aren’t too far back, though that’s mostly because the levels really aren’t all that long, and it still makes even the early boss battles a lesson in tenacity.

The levels are generally straightforward, though occasionally you may be tasked with grabbing a key in order to unlock a door that’s blocking your progress. Some of the stages scroll vertically too, which prove to be even more of a pain than normal, considering there’s all sorts of enemies lying right off screen that you can leap into. 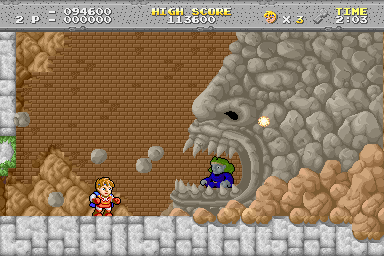 Irem tends to be known for their brilliant pixel artwork, but Hero Tonma isn’t one of their better efforts. For the most part, it’s not bad looking, but there’s something distinctly off about the protagonist’s design. He’s designed like a chibi, super-deformed character, but his face more closely resemble Western artwork than typical cutesy Japanese features, which kind of makes him look like a dork. The enemy designs aren’t that interesting (save for some of the anachronistic foes that seem to be wielding rifles), and none of the boss designs are all that striking either. The music has a classical feel, doing its best to replicate an orchestra with FM synth, and it generally sounds pretty decent.

Each stage is introduced by a map screen, which hammers home the fact that this is supposed to be a light fantasy alternative take on Ghosts ‘n Goblins’ darkly comical horror. The bits of halfway English text that preclude these are amusing, but the map screens sort of highlight one of the main issues of this game. Ghosts ‘n Goblins presented these screens as a way to tease you for later areas, which portrayed a fascinating view of the hellish landscape, and oh-so-out-of-reach final stages for all but the most skilled gamers. But the world of Legend of Hero Tonma is just a castle on top of a foggy mountain – there’s hardly anything exciting about it, enough to be worth all of the practice to make it to the end. 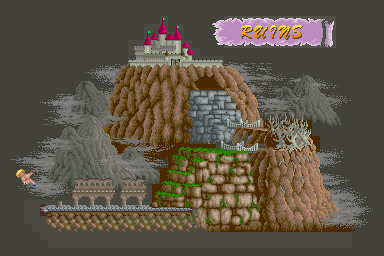 The game was ported to the TurboGrafx-16, and managed to be released in both Japan and North America. Like most of Irem’s other ports for the platform, it’s fairly well done, even utilizing the system’s high resolution mode to look close to the arcade version. The color palette doesn’t quite match, plus some background detail is lost, leaving the whole thing to look slightly off despite otherwise importing many of the sprites and tiles directly. But it plays almost perfectly, and is actually the better version, if only because the brigade of enemies isn’t quite as overwhelming and the time limit has been abolished, making for a more manageable experience. The built-in turbo fire functionality helps a lot, too. Interestingly, in the Japanese arcade version, all of the stage names are in English, but in the Japanese PC Engine version, these have been changed into puns (the first stage, otherwise called “Ruins”, here is “Chotto Omachi”, a play on the word for “village” and the phrase for “wait a moment”).

A Famicom port was planned, with numerous pictures published in magazines, and even had some video footage shown, implying that it was pretty far in development, if not completed. However, it was canceled for unknown reasons, and as of this writing, the prototype ROM has not leaked. Going by the video footage, it looks somewhat like the FDS port of Toaplan’s Wardner – smaller sprites, but basically maintaining the core of the arcade game. It actually removes the status bar and just shifts everything to the corner of the screen, giving a wider view. This section also seems to have both a “remaining lives” and a “heart” counter, implying that maybe they added a life meter, like the TG16 port of Ninja Spirit. 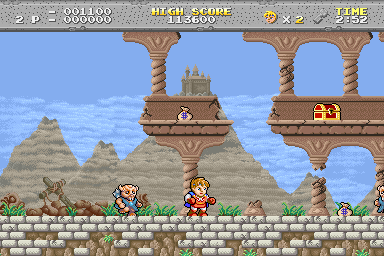 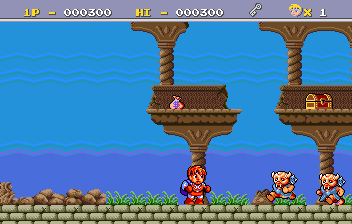