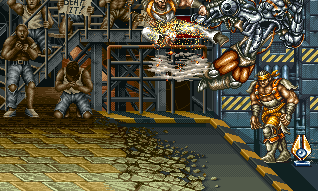 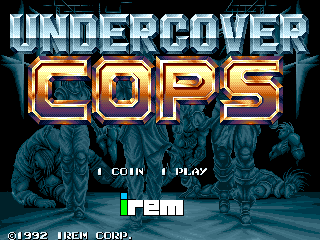 The works of the Irem staff who would go on to form Nazca are well known by arcade aficionados. With their emphasis on action and their gritty, heavily shaded art style, it’s never difficult to see where they started off from. Undercover Cops is probably one of their best known pre-Metal Slug works, and one where that style shows through the most.

The year is 2048, and an unnamed city is in rough shape. Actually, that’s somewhat of an understatement – the entire place looks like a post-apocalyptic hellscape. Birds pluck at flesh of the dead, cannibalistic humanoid underground dwellers turn the innocent into stew, and a mad scientist plans to nuke the city entirely. This is where the Street Sweepers – the titular cops – come in. Zan Takahara (Claude in the US version) is a martial arts master, and the balanced of the three. Matt Gables (Bubba) is a former football player, and thus, is the strong one. Rosa Felmonde (Flame) is a scrappy lady brawler, and falls neatly into the ‘fast but weak’ category. The game is part of Irem’s DAS (“Destroy and Satsujin”) series that share the same worldview, which also include In the Hunt, Gunforce 2, and Air Duel. 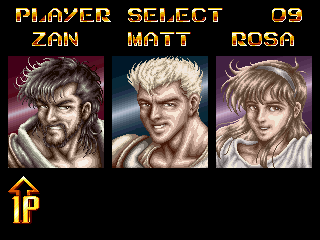 The three characters each have a respectable moveset, with a couple of different basic chains able you can perform depending on how quickly you tap the attack button. There’s also a dash that certain fast-lunging attacks can be performed from, good for when you need to land a blow on an enemy quickly. If you get knocked down, you can also perform an attack while getting up by mashing buttons, which quickly becomes vital during later parts of the game. Finally, along with the usual crowd-clearing special, every character has a second special that affects every enemy on screen. Unfortunately, using this move takes off such a big chunk of your health bar that it’s really generally best saved for the bosses. Health carries over between stages, but if you perform well enough, you can get a chunk of it restored, or even get an extra life. 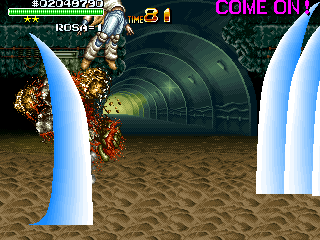 There’s not much in the way of weapons, but what is there is especially fun to use. You’ll often find concrete slabs or I-beams buried in the ground, which you can tug out and swing around to smack away your opponents. Objects like crates and concrete blocks can also be thrown, and at one point, you can even somehow hoist an entire jeep above your head and chuck it at your foes. Getting to perform crazy, superhuman stunts like this makes for a pretty memorable moment, and one that helps the game stay fresh for just a little longer. Moments like these are truthfully what gives the game its worth. 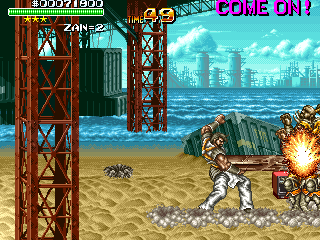 Unfortunately, the game can become quite frustrating. Enemies often have a habit of hovering just out of your reach, and then almost exclusively attack with fast lunging attacks with little to no windup. Even fighting the low-level mooks often feels like the early days of fighting game AI, where the computer would know exactly what you’re going to try and would always know the perfect thing to foil your plans. It’s not completely insurmountable, and there’s just enough you can exploit that you can properly learn the patterns and finish the game on one credit. The difference between this and your typical Capcom brawler, however, is that the game demands a constant vigilance to stick to these patterns. If you don’t, you’ll constantly get knocked around by foes, often ending up in loops where the same foe might knock you down multiple times in a row. Either way, it can get rather draining – especially considering that the game’s final stage lasts almost as long as all the previous stages combined. (A trait Nazca staff would see fit to bring back for Metal Slug 3.) The final stage also plays a rude surprise on you, where you find the game’s final villain attempting to drop his nuke from the air. Fail to interrupt him in time, and the bomb falls, you’re fired, game over – although one has to wonder who’s left to hand you the pink slip. Thankfully, it’s pretty easy to stop this, if you’re paying attention.

If there’s one particular highlight of the game, it’d have to be the boss fights, which might be some of the most unique foes seen in the genre. Your first stage boss puts you up against a hydraulic-armed cyborg who turns out to be a full robot. In a nice touch, the crusher he’ll try to toss you into can be used against him, if you’ve got good timing. Other bosses of notes are the large woman with a jackhammer who begins to constantly cry when she’s lost half her health, or the Devo-hatted magician who rolls out his own red carpet to start off his fight. However, you’ve got to deal with their brutal AI, again requiring a reliance on patterns, along with a health bar that feels entirely too long. 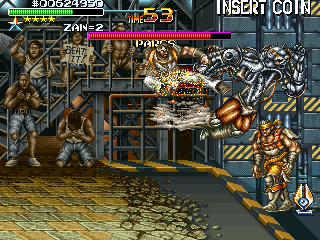 The game has a sense of style that can’t be denied, and that’s a trait that makes the game worthy of attention. The characters sprites are large and detailed, with some surprisingly smooth animation. There’s plenty of extra details, as well, from the corpses you’ll encounter hanging from beams in the foreground, to the rats, frogs, and snails that occasionally scatter. You can even grab them for extra health – probably the most unpleasant form of ‘street meat’ you’ll find in a brawler. The explosions are also worth pointing out, their smooth animation and heavy shading having carried over almost untouched, at least in style, to the Metal Slug series. The music’s generally on the funky side, making use of plenty of digitized samples, and if it’s your style of music, there’s probably going to be at least a few tracks you’ll probably want to listen to after your playthrough. 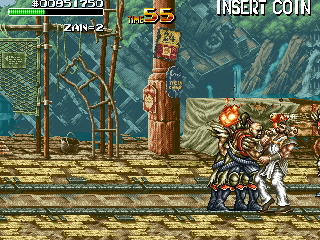 Undercover Cops is a very typical “style over substance” case. As it stands, that style is fantastic enough that it’s worth playing through to marvel at the spritework, but it doesn’t quite walk among the greats. At the very least, Irem would reuse the framework for Ninja Baseball Bat Man, a game with a somewhat fairer challenge. While it doesn’t have the signature Nazca style to it, it’s still an easier game to recommend.

The arcade release has three different versions. The “World” release is the inferior version, missing a large portion of the movesets as well as some background details that the “Japan” version has. The “Alpha Renewal” version, however, has English text while being based off of the Japanese release, making it the definitive way to play the game.

A Super Famicom version saw release three years after the original arcade version. A US release was advertised, but never happened, likely due to the impending end of the system. It’s a respectable port, and while it suffers from understandable cuts to sprite size, number of frames, and background details, it plays very faithfully to the arcade. The only true drawback is that there’s only support for one player, and there are far less enemies on screen at one time. Even with these limitations, there are points where the poor SNES can’t handle everything going on without some slowdown. 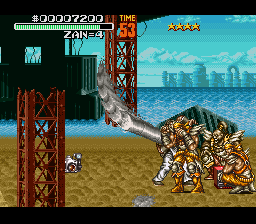 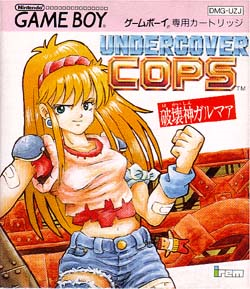 Undercover Cops: Hakaishin Garumaa, a turn-based board/card game hybrid spinoff game, was released for the original monochrome Game Boy only in Japan. You choose one of the three heroes and roll a die to advance on a Mario Party style board, encountering shops where to spend your money and running into enemies you take down on turns. It’s a cute idea and has nice super-deformed art, but gets boring really quickly. It’s playable even with minimal Japanese skills, so a look at it can’t hurt if you are a fan of the arcade game.