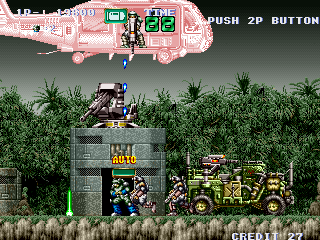 While most fans of run-and-gun video games know Metal Slug, they might not be aware that its lineage can be traced all the way back to 1991’s GunForce, an arcade game published by Irem in North America and Japan. Upon playing the game, the reasons for its obscurity become clear – this is a decidedly wonky start to the series that is best left as a curio.

The game offers no backstory, but both the US and Japanese arcade flyers fill in the blanks with two entirely different tales. The American version is straight to the point – GunForce is a multi-national army assembled to stop an alien invasion. Japanese fans get a more intricate narrative – it’s the year 2000, and the nefarious R State has finished building a fortified base in the sea that is controlled by a highly intelligent military computer.  The maniacal machine breaks into other countries’ computers, allowing R State to invade. You (and a friend, if you choose to take the game on two-player) are sent by the rebellion in a last ditch effort to bring down the rogue CPU and restore liberty to the world. 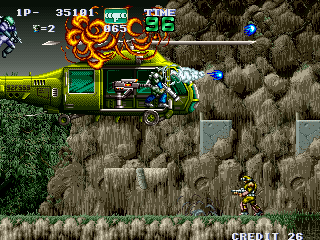 Visually it brings to mind both Turrican and Contra’s robot-starring European NES port, Probotector. The graphics are poor for 1991 with small, charmless sprites and backgrounds that veer from gray to brown and back again with little variation. Add scant animation to the mix, and GunForce would feel entirely lifeless if it wasn’t for some satisfyingly chunky explosions.

Button A shoots in one of eight directions, with Button B allowing you to jump, mount a vehicle or hang on a rope if pressed with up on the joystick, and dismount the same if pressed with down. Down on its own allows you to crouch, key for avoiding enemy projectiles, and you can also lock your gun in one direction while you move in another. It’s an intuitive setup, marred by a floaty jump. Enemies pass straight through you, but eat a bullet or let the timer tick down to zero and it’s instant death. You get three lives per continue, gain an extra life every 100,000 points, and, helpfully, spawn where you fell.

As well as your standard pea shooter, downing enemies or breaking open crates sometimes reveals power-ups including an automatic gun, bazooka, flamethrower, lazer gun, or bonus points. All but your default gun have limited ammo, although it’s possible to pick up more shells.

Where you catch a glance of the primordial beginnings of the Metal Slug franchise is in the vehicular combat, GunForce’s USP. Within seconds of parachuting into the first level you hijack a military jeep, take to the skies in a helicopter, and have everything from gun turrets to motorcycles for the taking. It’s a shame, then, that the gimmick is largely ignored in the second and third stages, only returning in the fourth (the game’s highlight), before being forgotten again for good. 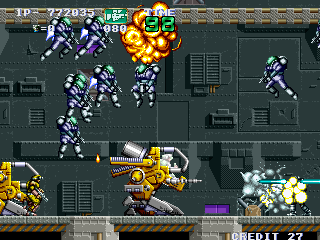 You battle across six stages, first dropping into the jungle to break into the enemies’ front base, hitting their supply depot second, and the vertically scrolling communication tower in the third level. The aforementioned fourth stage places you astride a tank as you storm the command base, mowing down enemies left and right in a fun sprint. After breaking into the enemies’ fortress in the penultimate level, the finale sees you square up to the last boss in their underground lair. Complete the game and you’re greeted with text thanking you for saving the world as the island crumbles in the background. It’s not entirely satisfying, but you are at least able to add your name to the high score table.

GunForce is plagued by repetitive enemy design, featuring troops with guns, or the same troops with flamethrowers, or similar troops with lasers, and so on. Occasionally you are confronted with a vehicle to take down, and the game does mix in flying troops from time to time. The final stage adds fast little droids and mutants, but it’s not enough to make up for the monotonous minions beforehand. And the bosses are something else – all are static structures that fill the screen and have no animation apart from their gun turrets and bullets. Each require you to avoid projectiles and shoot the big thing in the middle of the screen, with no urgency to do so. As a pay off to completing the level, they’re quite the let down. 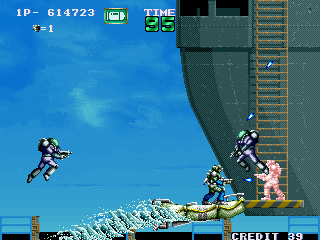 At least the music is adequate, with some upbeat electro-funk jams to soundtrack the action in the first few stages, and some sterner stuff in the later ones. The final level has an eerie theme that fits the alien atmosphere well. Unfortunately, all of the boss fights have the same grating piece of music playing throughout. The sound effects pass muster, even if they are a little tinny. There’s the odd gun sound that only serves to annoy, too. Endearingly, a sampled gasp of agony sounds when you die that’s very similar to the famous Wilhelm Scream.

Bit Studios released a SNES version in 1992. It’s a miserable port, adding only a few minor changes to enemies and level design, new music and sound FX, and a ton of slowdown. The sluggish pace, coupled with five lives and three continues per play, means most players will reach the end of the game easily. Receiving very average reviews at the time, the arcade iteration is the way to go if you’d like to play the game today.

GunForce, in spite of its shortcomings, has some neat ideas tucked away, the vehicular combat especially. Unfortunately, they are almost all executed poorly. It’s only worth playing if you’re a Metal Slug uber fan and are dead set on seeing where the series began. Things would improve exponentially (and how!) in the vastly improved sequel, GunForce II (known as Geo Storm in Japan) in 1994. 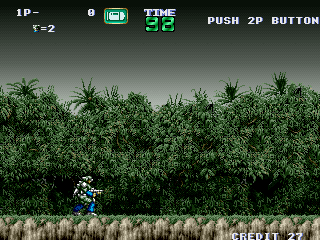 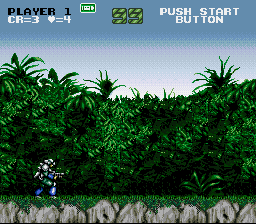