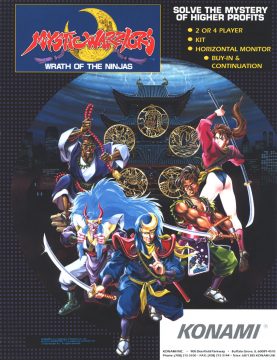 Konami’s Mystic Warriors is a lot like their previous game, Sunset Riders, though it moves away from the western theme and turns into a take on cheesy 80s martial arts movies. Up to four players can pick from five different characters – an American ninja named Spyros, a leotard-wearing kunoichi named Yuri, a kabuki warrior named Keima, a samurai named Kojiro, and a cool street monk named Brad – although functionally, they’re all identical. The fifth, unchosen character ends up being kidnapped by the enemies, providing the motivation for our heroes to jump into action. Locales range from city streets to underground mines to airplanes to ski resorts – all of the usual video game stages, and then some. It certainly has more variation than Sunset Riders (which it pays tribute to at a drive-in movie theater in the background), although the music isn’t quite as memorable. It has all of the typical Konami over-the-top flair, like when the first level boss crashes through the scenery in a huge truck and sets the background on fire. The second level boss fight takes place while snowboarding down a mountain. It has an interesting twist roughly halfway through the game, where your characters are incapacitated, only to be saved by the fifth, kidnapped hero, who gets him-or-herself killed in the process. 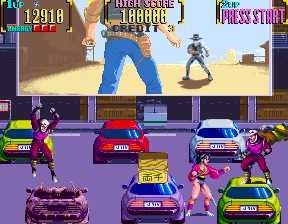 The action is roughly the same as Sunset Riders, right down to the power-ups that double your firepower. Mystic Warriors borrows a few more elements from Shinobi, most notably the melee attacks that will automatically execute when you’re close to an enemy, and the ninja magic that lies around the stage. These will either kill all of the enemies on the screen or make you temporarily invincible. They’re activated as soon as you pick them up, though, making their use rather limited. Like Moo Mesa, you can also take three hits before dying. Plus, like Contra III, you can also climb up walls, although there aren’t many situations that make use of it. 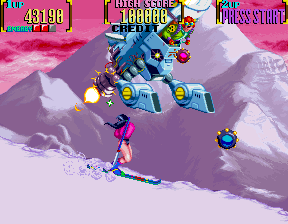 Mystic Warriors is a pretty darn fun game overall, with tight action and a likable vibe, which unfortunately goes unrecognized because Konami didn’t have the wisdom to port it.