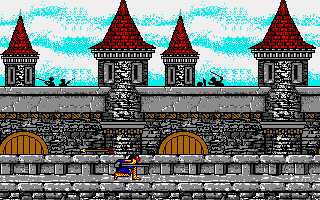 The 80s were full of fun fantasy films. Krull, Dark Crystal, Labyrinth, Legend, Time Bandits, Baron Munchhausen. One of the better ones was Willow. Willow was directed by Ron Howard, but the mastermind behind it was George Lucas, who had envisioned Willow to be a fantasy trilogy. Sadly, like most fantasy films of the era, Willow didn’t do exceptionally well at the box office, and so it was resigned to having its second and third installments released as novelizations.

Willow had some things a lot of fantasy films lacked during the day. It had a half decent script, extremely high production values (hey, it’s George Lucas), and a solid cast of actors. But it also had its issues. Many people felt it was a blatant rip-off of Lord of the Rings, and in a way, that is understandable. But Lord of the Rings is so fundamental and simplistic that it’s pretty easy to draw parallels between it and just about any later work of fantasy. Willow still had a unique feel and flavor, and up till then, there still had not been a worthy adaptation of Lord of the Rings to the silver screen. It should also be noted that Willow was originally intended to be a film adaptation of The Hobbit, but George Lucas could not procure the rights to the Tolkien franchises.

Willow is named after its main character, a Nelwyn (dwarf) who lives in a peaceful village isolated from most of the world. Willow (played by the infamous Warwick Davis) is an aspiring magician, but finds himself enveloped by the simple life of a farmer. One day, Willow’s children find a basket floating in the river. When the basket is plucked from the water, they are startled to find that inside of it is a baby – but not a baby from their world. It is a Daikini (a regular human, giants to the Nelwyns). Willow’s wife, Kaiya, is immediately enamored with the child and takes it in against Willow’s wishes. Not long after, the village is attacked by a pack of beasts. The beasts are fended off by the warriors of the village, but Willow is brought under fire from the village council for taking in the strange child, and is charged with the task of bringing it back to where it belongs.

During the course of his journey, Willow meets up with a criminal left in a cage out in the middle of the wilderness. This charming yet sinister fellow professes to be the greatest swordsman in history, and offers to help Willow if he frees him. Willow does, and gives the baby to the self-proclaimed warrior, Madmartigan, played to perfection by Val Kilmer. Madmartigan takes the baby with open arms and promises to guard it with his life. Not much later, Madmartigan loses the baby, doesn’t really care, and the baby ends up in the hands of a bunch of brownies (really tiny people), who also capture Willow. The brownies are working for Cherlindrea, a goddess of sorts, who reveals to Willow the true nature of the baby: She is Elora Danan, destined to destroy the evil sorceress Bavmorda, who is seeking to conquer the entire world. Cherlindrea then charges Willow with a new task; protect Elora at all costs.

A pretty standard plot yields a timeless adventure flick with great characters, incredible action sequences, one of which has the most gruesome and creative death scene in any PG-rated movie ever, an unforgettable soundtrack which was sampled in trailers for other movies for many years, and some of the best visual effects ever seen at the time, effects that still stand up quite well to the digitally empowered movies of today.

Back then, just about every movie that was even mildly popular with the kids got a video game incarnation, usually on NES. And Willow was indeed pretty popular with children, and therefore, received several video game adaptions. 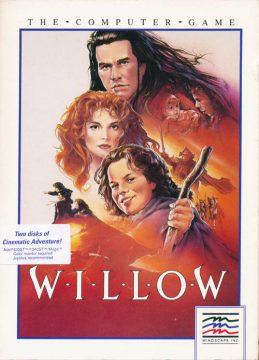 The first interactive incarnation of Willow was developed by Mindscape for several home computer platforms, and consists of five mini-games, each based off scenes from the movie and all of them atrocious. One is a first person dungeon navigation maze, but if you step into the wrong room, you lose and need to start from scratch. Awesome! There’s another first person segment where you’re sliding through an ice maze and need to decide when you turn down different tunnels. Make the wrong decisions and you lose. Double awesome! At least the animation here is kind of impressive for the computer at the time.

There’s also an overhead segment where you play as Willow in a forest and need to avoid a horse of enemy soldiers coming at you. You can throw stones at them, at least, but the controls are so horrible that they suck any fun out of it. There’s another action-based sidescrolling scene where you play as Madmartigan storming the castle. It’s about as simplistic as it can get – similar to Yie Ar Kung Fu II, you jump over incoming projectiles, then fight off enemies one at a time. This also controls terribly, and is also not at all fun.

Finally, there’s a level where you need to cast a magic spell on a rat. Choose the wrong symbols and – hey, guess what, you lose. At least you can pick and choose which stages to go through if you get sick of them. But otherwise, this is all pretty terrible.