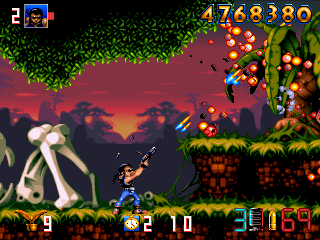 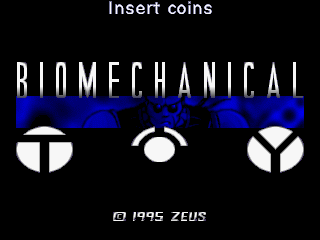 Biomechanical Toy is a run-and-gun arcade game developed by a company from Spain known as Zeus Software. They created a handful of games for various home computers, the most well known being a Risky Woods, a co-production with Dinamic Software, which received a Genesis port.

The story involves a criminal toy named Scrubby, who has recently escaped from jail. He was imprisoned for trying to steal a treasure known as the magic pendulum, which makes the toys of this world’s setting come to life. The pendulum is guarded by a cuckoo clock named Relik, when it’s suddenly stolen by the recently escaped Scrubby. The player, an action hero toy named Inguz – who looks sort of like Steven Seagal with a black muscle shirt and dark sunglasses – is called upon to get the pendulum back from Scrubby and save the toy world before it disappears. It’s a very strange game, one that certainly separates itself visually from other run-and-guns. 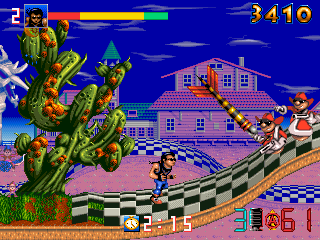 Upon starting the game, you begin blasting your way through hordes of enemies with their semi-automatic pistol, which has infinite ammo. However, you can collect ammo to turn it into an automatic pistol, which does more damage. There are also screen-clearing bombs and a power-up that turns the player’s gun into a shotgun, which has greater range and does more damage but has less ammo. You can also jump on enemies like Sonic or Mario, and this is essential to get some of the power-ups in some areas of the game. At certain points in the level, the player can rescue a captured toy who then helps them out for a section of a level. These include a Robin Williams-esque genie, a dragon, a faerie, a tiny mecha, and a few others. The player can also collect fruit to restore health, with the ability to even go above the default health amount, as well as various items to gain points.

Inguz goes through several levels including a Wild West level, a chess-themed level, a train, a clockwork forest, and a prehistoric themed level. The stage bosses are not always thematically related to the stage they conclude, such as a virus boss being placed after a train stage, but they generally get the job done. The colorful, trippy graphics are reminiscent of many Amiga games, owing to Zeus’ pedigree. 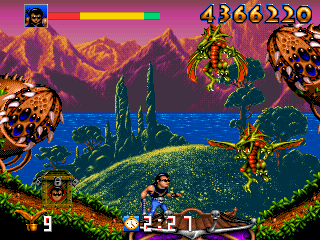 While the game has vibrant and comical visuals, and generally solid mechanics, it’s not without its issues. The player can only aim while shooting and not while moving, which usually isn’t an issue. However, the player cannot aim diagonally downward, instead only being able to duck and shoot. It’s missing a two player co-op mode, offering only alternating play. The sound effects are quite stock, often being quite comical, while the music is mostly downsampled tracks stolen from other sources, including various Hollywood movies – the music from the third stage is from To Live and Die in L.A. – but they don’t necessarily clash with the bizarre feel of the game. The game also has some amusingly bad English at times, such as “shot key to stop the train” in the third level.

Being an arcade game, Biomechanical Toy is definitely quite tough. Health power-ups only restore a fraction of your life bar, while enemies can take about a quarter of your health. There are times where the player is respawned in the middle of the action, making it hard to avoid damage. There are also some parts which may feel intentionally cheap, including some of the boss and miniboss fights. The hit detection when doing a jumping attack can also be a bit iffy at times. Usually with Japanese run-n-guns and shoot-em-ups where the player dies in one hit, there’s a clear and concise way to go about going through the level. However, the designers of this game feel that because the players have health, that they are going to make some parts where players are going to have to “cheese” their run. In other words, it’s not really on the level of other genre greats like Metal Slug (though it did predate that game by about a year). However, despite these shortcomings, Biomechanical Toy is still a decently fun game, with a weird setting and tons of explosions, that channels the bizarre stylings of computer shareware games from the era. 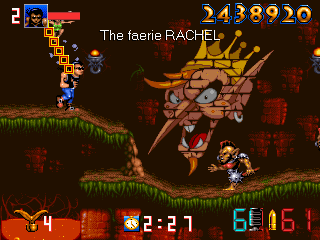 Unfortunately, Biomechanical Toy was released in 1995, when 2D was beginning to be considered old hat. And being published by a company from Spain, which was not known for arcade games as much as America and Japan were, the game did not get that much exposure. Zeus Software ceased to exist around 1998, and Gaelco’s main business is manufacturing electronic dartboards.