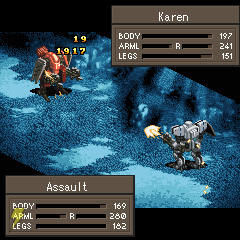 Front Mission 2089 was a new frontier for the series, mainly as it was the first game made for the mobile phone. It was released in 2005 with periodic episode downloads, which were released on a monthly basis.

The story of Front Mission 2089-I takes place in 2089, one year before the 2nd Huffman Conflict. Players can choose to fight for the OCU or the USN, but story and character development remain the same in both cases. The only thing that changes with that option is the main character artwork.

Front Mission 2089: Border of Madness for the Nintendo DS covers the entire 2089-I story. Rather than let the player choose which side to fight for, Border of Madness uses the OCU cast of characters from Front Mission 2089-I. While 2089-II was not fully included, parts of it are there as a means to tie the two games together. New plot elements were added to help tie the 2089 mini-series into the main series, along with recurring characters from the other games.

The main protagonist, Storm is a mercenary and a former OCU soldier. He belonged to an OCU unit known as B.A.T.S., but resigned from his post for unknown reasons. Storm travels to Huffman Island in search of employment and was recruited by Falcon.

Falcon is an OCU commander who is assigned to working with mercenaries on Huffman Island. Perceived as a boring and dull man, Falcon prioritizes his work above all else. He does, however, treat mercenaries as if they were members of the military. 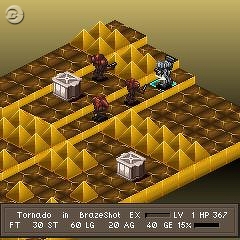 The continuation of the Front Mission 2089 series was released for mobile phones in 2006. As with its direct prequel, periodic episode downloads were made available on a monthly basis.

The main protagonist, Tornado is an OCU soldier who works for the Chariots mercenary group. He was sent to Huffman Island to assist the Chariots in border patrol duty. Along with mercenaries Champ and Oddeye, Tornado trains new wanzer pilots on Huffman Island.

Sana is an OCU captain and the commanding officer of the Chariots. After serving in war zones around the world, she was assigned to Huffman Island. Sana is good friends with Karen Meure and has known her since they enlisted in the OCU military. 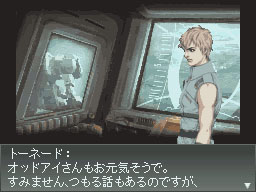 Presentation-wise, Front Mission 2089-II is exactly the same as 2089-I. This isn’t a bad thing though, as it is a direct sequel to that game. The realistic anime artwork is still intact and the aural elements have been recycled, so expect to hear Front Mission 1st and Front Mission Online music. Game design is where Front Mission 2089-II makes all of its changes. Although the game plays out like Front Mission 1st, it adopts the job system used in Scars of the War. Players are free to control their characters’ growth, but get the most out of them through their specialties. Skills can also be removed and re-equipped at any given time. Weapons are also rebalanced to act more like they would in other episodes. Melees, for example, can’t hit aerial targets. Even the flanking mechanics from Front Missions 2 make their way into 2089-II. The game also has a survival simulator feature similar to the one found in Scars of the War. Like the first episode, Front Mission 2089-II. 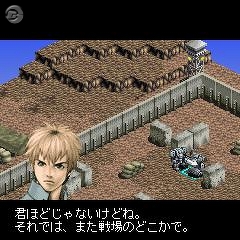 During a survey taken for the Front Mission mobile games, it was reported that fans wanted ports of them for dedicated gaming systems. In response to the general consensus in the survey, Front Mission 2089: Border of Madness was released in 2008 for the Nintendo DS.

Graphically, Front Mission 2089: Border of Madness is a step up from its mobile phone counterparts. The battlefields and sprites are on the same level as Front Mission 1st. The modernized backgrounds and realistic anime artwork from the 2089 mini-series are retained and look better than before. Instead of mugs hots of the characters, they’re shown in full body and convey a large amount of movement and expressions. A new addition to the game are the manga-style still images, which are used to present the cut-scenes. For music, Border of Madness is an interesting combo of tracks from most earlier games. Some of the tracks have unusual placements in the game, which results in a disjointed aural experience. Lastly, the sound effects are recycled from Front Mission 1st. 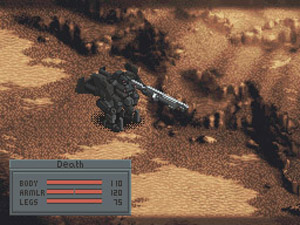 As far as game mechanics go, Border of Madness is an unusual mixture of borrowing elements from other Front Mission games, while still playing like the original. Elements like armor coating and Links make their way into the game. Unlike Front Mission 2089-II, Border of Madness doesn’t do enough of this to radically change the way it’s played. There is no job system, skills can’t be removed, only some weapon types are rebalanced, flanking is non-existent, and the Links lack the same level of depth found in the other games. In the end, Border of Madness is simply Front Mission 1st with more balance and strategic depth. This isn’t exactly a bad thing, but the effort feels a little lacking in the grand scheme of things.

For what it is, Front Mission 2089: Border of Madness is a decent attempt to merge the 2089 mini-series into one game. It’s a shame that the whole story from the second part couldn’t be included, but some of it is better than none. There’s a lot of recycling in its presentation and game design, not to mention the questionable placing of the music tracks. Despite these flaws, Border of Madness has its merits and ultimately is worth playing. The interface is now touch screen-friendly and is easy to use. Newcomers can rejoice in a tutorial system that explains the game’s features in a clear manner. The excellent level design goes a long way in making the battles strategically diverse and engaging. Like its mobile predecessors, Border of Madness has only been released in Japan.