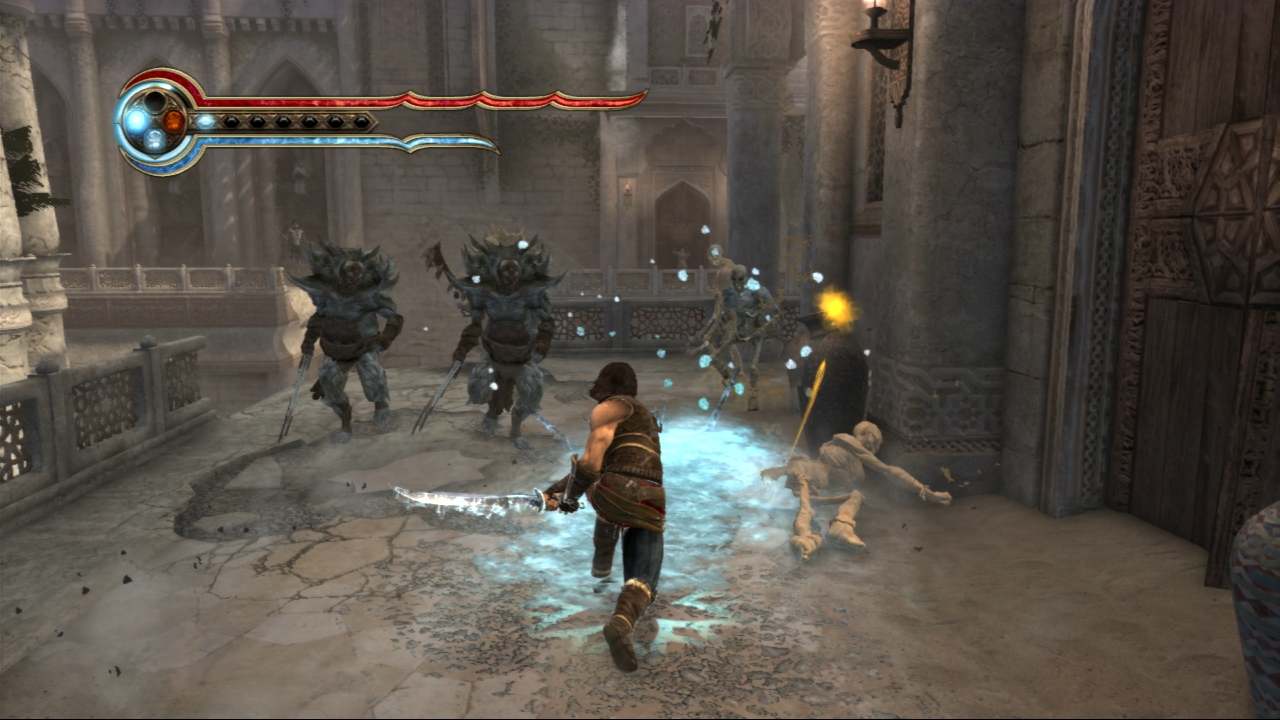 With the Disney movie on the horizon, Ubisoft saw their chance to cash in big time with the Prince of Persia series, so within days around the film’s premiere, they released no less than six entirely different PoP games, all carrying the same subtitle, The Forgotten Sands. The whole point was, so Ubisoft claimed, to fill in the forgotten gaps in the Sands of Time trilogy (hence the title), namely in between the first and second games. In the end, however, nothing in the games has to do anything with the events in The Sands of Time or Warrior Within. They’re more like a kind of anthology of unrelated stories with similar themes that happen to use the same main actor each time. The Prince is supposed to walk away from each having learned some kind of lesson (that is usually badly motivated by the plot), but nothing of it really informs the Prince in Warrior Within. Many even take him to realms that are separated from the outside world to avoid any meaningful interference.

The only version still done by Ubisoft Montreal, the studio responsible for the original Sands of Time trilogy, is also the closest to fitting into the series, although it dislocates the events far enough to avoid any interference with the overarching plot and feels more like a side story. The Prince is sent by the King to train under his brother Malik, who is given the reign over one of the Empire’s provinces, a kingdom called Azad. At the time of his arrival, however, the Prince finds Malik’s fortress under siege, and things don’t look very good. When he finally finds Malik his brother drags him along to resurrect the legendary army of King Solomon. But a part of the legend has been lost in the generations of oral retelling: The army was not commanded by Solomon, but actually lead by the rebellious Ifrit Ratash against the Sage King. So the whole fortress is overrun by Skeletons and every human being is turned into sand – save for the Prince and Malik, who each hold a half of the magical Amulet used to control the seal that used to hold the army at bay.

While Malik is seduced by the power both of them gain with every slain skeleton, the Prince of course tries to find a way to seal the army away again. He meets the djinn Razia (in a clever homage to the life-extending hidden areas in Sands of Time. The Prince comments: “This place is very familiar.”), who aids him with advice and bestows upon her powers over the flow of time – the rewind function is back.

But there’s more. In later meetings she also teaches him to freeze water, which is the game’s new main puzzle mechanic. With it, the Prince can create temporary poles and walls. In the beginning, that just means that you have to hold one more button during platforming, but the sequences grow gradually more complex, so often you have to swing from an ice swingpole, jump through a waterfall, no back to liquid state, and in the end quickly freeze the water again to hold on to the next pole. Towards the end the prince also learns to temporarily restore single elements of the fallen city of the djinn, which at first feels quite similar, but makes for even more depth when the Prince is forced to combine the two powers.

The Forgotten Sands not only returns to the Sands of Time universe, it also plays very much like the previous games. The Prince has all his trademark maneuvers, he runs up walls and slides down curtains just like he did in the good old days. There has been, however, a couple of tweaks to the controls. There’s finally a dedicated jump button that does nothing but jump, in any situation. It may be a bit irritating for series veterans at first, since the button that was usually used to climb up a ledge now causes the Prince to leap to the opposite direction, often to his death.

The movements in general feel more realistic, as if there was actual weight to the Prince. Nonetheless the game is nowhere near the dull pace of the first Assassin’s Creed, in fact the animations are faster than ever before. When jumping from a vertical pole, there’s no need to tediously slide into the correct position, just press the jump button together with the direction of choice, and the Prince turns around the pole and jumps in a single, fluid movement.

Combat, on the other hand, has once again changed quite a lot. The Prince is now a real badass with a sword, taking on huge crowds of enemies at a time. The focus is therefore on keeping the upper hand in improbably outnumbered situations, playing the enemies out against each other and keeping the Prince from getting surrounded, not dissimilar to Batman: Arkham Asylum. Slashes can be charged for more damage and a wider radius, new button is dedicated to push enemies to the ground or down a pit, or get their shields out of the way. Acrobatics once again figure heavily into the combat, although the wall rebound attacks from Warrior Within and The Two Thrones are gone. The Prince will crush enemies to the walls instead, finishing them off with a blow to the head. The exact moves are heavily contextualized but you always feel in total control, the game completely disposed of any QTEs, even boss finishers are done in-engine. 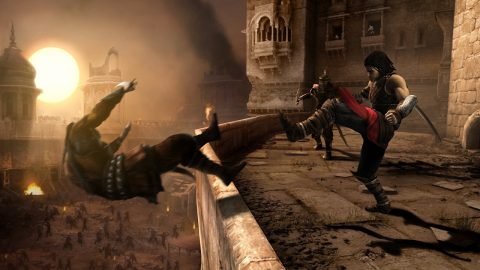 “This is Persia!” No, seriously, that’s what the Achievement/Trophy is called.

Among the magical powers the Prince is given by Razia, some spells are meant for combat rather than platforming. There’s four of them, each corresponding to one of the four traditional elements: With Fire he leaves a trail of heat wherever he walks, burning the enemies that dare to pass, Wind calls a tornado that takes all enemies around him off their feet. The most valuable is Earth, which makes the Prince invulnerable for a limited time, while Water sends out rays of ice towards the direction he is facing. Unlike the essential puzzle abilities, these are not obtained during story cutscenes, instead you get to choose the order you learn them.

The Forgotten Sands is the first in the series to employ a traditional experience point system. By picking up yellow essences, the Prince gains level-up points he can invest in several upgrades on a skill tree. Not only the combat magic is upgraded here, but also things like the health bar, magic tanks and the power of the different melee attacks. The system is not very balanced, though: While stronger enemies later in the game drop more experience points, the costs for upgrades caps at 300 points – making the Prince’s levels grow exponentially fast towards the end, while the enemies stay mostly the same. In the end, when the Prince gets the ancient Sword of the Djinn which can mow down a dozen enemies in a single stroke, combat becomes a pushover. Even the bosses are total jokes, so much that the designers had to break them up with more platforming sequences to prevent you from falling asleep. Two enemy types that exist solely to forward platforming with a special dash-attack make for further involuntary comical relief. The overall great impression only gets a little muddied by the dull colors. The Sands of Time games have never been famous for garish coloring, but The Forgotten Sands appears as the brownest of the lot yet.

There is also an issue with the “cinematic” direction of the game: Sands of Time would often loosely lock the camera to a certain angle to point players to the right direction to jump. While the system has been toned down with the sequels, here it is back in full force, and beyond. The Forgotten Sands dictates your view on platforming almost at any time, with the same dissatisfying sense of confinement conveyed by God of War or Devil May Cry. While the previous games have been mostly linear, they at least gave the illusion one could explore the areas somewhat freely. Here one almost feels like moving on rails because of the constant tunnel vision.

As the graphics are a lot more realistic, the Prince got another visual makeover, although he’s still clearly recognizable from the design of Warrior Within and The Two Thrones. Even though his face is not modeled after Jake Gyllenhaal, there’s something in his facial expressions that feels familiar after watching the movie. The Forgotten Sands is the first “main” game in the Prince of Persia franchise that doesn’t give the prince a love interest, but the series trademark bickering is still fulfilled by his brotherly disputes with Malik and later arguments with Razia. 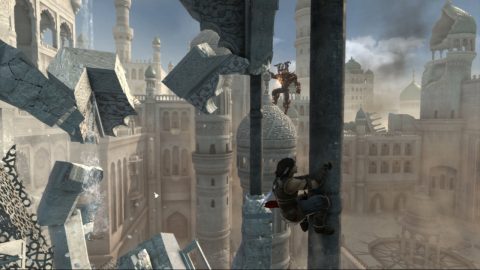 The game ties in with Ubisofts new Uplay portal, which is used to unlock a bit of bonus content. It’s actually a pretty cool concept, since you can use points gained in one Ubisoft game to unlock stuff in another. Of course, that comes with the obnoxious requirement to be online while playing the game, and the “coming soon” menu point for a store betrays Ubisoft’s true aims for the service. The unlockables themselves are rather barebones: A wallpaper/skin for your system, an experience point upgrade (total waste of points), the second of two arena combat challenges and Ezio’s frobe from Assassin’s Creed 2. Further costumes (Malik’s armor and the Sand Wraith skin from Warrior Within) remain exclusive to buyers of the Limited Collector’s Edition of the game.

While The Forgotten Sands is a full-scale return to form for the series, this also means that it is a return to old, worn-out paths. The platforming is the best yet, but it brings little new to the formula. Where the formula shows it age the most are the surprisingly frequent symmetric rooms that you have to climb twice, once on each side. It doesn’t take long before the feeling of “I’ve done this before” extends from those rooms to the whole game – there’s only so many different combinations you can string together with the given elements, the new powers likewise rely more on iteration than innovation. The combat feels fresh, but only until the final third of the game, when it becomes too easy to be any fun. If you haven’t played any of the Ubisoft Prince of Persia games before, this one is composed the best. If you just finished your Sands of Time trilogy marathon, give it a few years on the shelf, or else the experience might turn sour fast.

Screenshots are taken from Prince Of Persia.de.