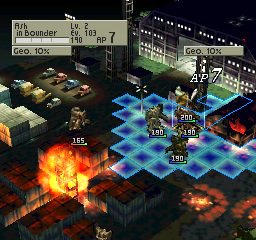 Front Mission 2 was released for the Sony PlayStation in 1997, roughly three years after the console’s launch. By this time G-Craft had been absorbed into Square Inc., and the game marked the series’ ambitious entry into 3D graphics.

Set in 2102, Front Mission 2 depicts the events of a coup d’tat in Alordesh (Bangladesh with a name change), an OCU member state. It features an ensemble cast and follows the stories of three main characters, which eventually come together for the game’s climax. Taking place in one country in one month, this is arguably the most sophisticated story of all Front Mission games, more focused spatially than Front Mission 3‘s globe-spanning plot and temporally than Scars of the War‘s decade-spanning tale. The unique structure of the story is augmented by the contents it portrays. Weighty questions like the nature of revolution and colonial dependency are discussed as Alordesh goes through a bloody civil war that has consequences extending beyond its own borders.

Born and raised in Alordesh, Ash is a corporal in the OCU Maritime Defense Force’s (MDF) 41st battalion, the Muddy Otters. A former lieutenant in the Alordesh Army, he is a quiet man with a mysterious past that is revealed as the story progresses.

Thomas is a captain in the OCU Ground Defense Force’s (GDF) 89th battalion, the Dull Stags. A jovial person with a love for liquor, he often strays outside the bounds of the law by embezzling OCU weaponry. Still, Thomas has a strong sense of righteousness when it comes to helping his friends.

A captain with the OCU Intelligence Agency, Lisa is a serious and capable woman who is sent to Alordesh to recover a mysterious missing container pursued by both the OCU and the coup d’tat forces. Lisa’s investigation eventually becomes central to the game’s plot. 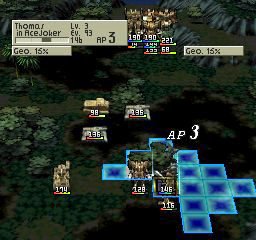 Front Mission 2‘s visual presentation was well composed for the time of its release. Jun Suemi’s (Wizardry) elegant artwork ventured into gritty realism, a trend continued by the future entries. The 3D graphics were state-of-the-art for its time, with the main highlight being the battle sequences. Front Mission 2 made these more realistic; combatants maneuvered around the battlefield for attacking and evading attacks. Unfortunately, this resulted in long load times and consequently was removed in future entries. (Front Mission 5: Scars of the War retains some of these elements, though.) The game’s backdrops and full-motion videos (FMV) help bring Alordesh to life and do an excellent job of conveying the depressing atmosphere. Despite its technical shortcomings, Front Mission 2‘s highly engaging visual presentation is one of its strong points.

Complementing the beautiful visuals, Front Mission 2‘s aural presentation is equally as impressive. Noriko Matsueda returns as the game’s composer and creates a score that is an excellent fit for the settings. Aside from several arrangements of tracks from the original Front Mission, like “Terrible Density”, the game’s score is largely atmospheric. Through clever usage of ambient sounds, it does an outstanding job of keeping the game suspenseful, intense, and most of all, engaging. Players can easily imagine themselves as being participants in the civil war as it unfolds and reaches its climax. The sound effects augment the musical score in that it ventures into realism as opposed to the sci-fi sounds of the original Front Mission. Shotguns sound like shotguns, jet engines sound like jet engines, and so on. The explosion sounds are also very powerful, especially when heard through sound speakers. 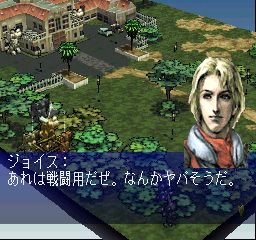 Front Mission 2 is a major leap forward from the original Front Mission in game mechanics as it allowed for greater tactical complexity, and a sense of scale unrivaled in the entire series. The main innovation was the Action Points (AP) system, which dictated how many times units could act. As all actions needed AP, this made the player think carefully about decisions like positioning or attacking. Another key feature is the Honor system, which encouraged teamwork to defeat enemies. To help players immerse themselves into the game world, a Network feature was added, which acts like a pseudo-Internet system with websites and forums. Also new to the game is the job system. Each pilot has a role they’re good at and training in other areas is discouraged (like greatly reduced accuracy). Weapons have also been changed and are well balanced this time around thanks to the hitting property system.

Other additions such as removable skills, armor coating, and flanking helped make Front Mission 2 the series’ most complex game until Scars of the War. In terms of scale, it boasts an enormous scope of battles. Most missions pit the player against 20 or more enemies, have many objectives to fulfill, and require hours to complete. The player can plan out their approach through briefings, which are improved in that battlefields can be viewed. In this sense, the game transcends most genre offerings by allowing players to think on a strategic and a tactical level. Combined with its steep learning curve and complex play mechanics, Front Mission 2 is arguably the most hardcore entry in the series.

Front Mission 2 hits the right notes on a lot of areas, particularly in story and game design. However, due to its design, the game has significant user accessibility issues. The long load times in the battle sequences are a problem and unless one has the Ultimate Hits version (which comes with battle skipping), can’t be skipped. The complex nature of the game mechanics as well as the massive scale missions can overwhelm players. Even getting money in the Arena is a challenge due to its scaling difficulty. Luckily, there is an in-depth tutorial system in place that helps explain the complex game mechanics. Its flaws aside, Front Mission 2 is a pivotal entry in that it lays the groundwork, in terms of story and game design, for the future installments. Many game mechanics are expanded upon in other Front Missions. From the story aspect, the game foreshadows numerous stories that are seen in the later entries. 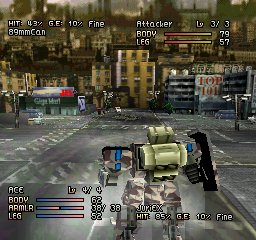 Front Mission 2 was released only in Japan and never considered for localization overseas. Whether it was due to the steep, complex play mechanics or its mature, controversial content (like the implied homosexuality of one of the main characters) at the time, it’s a shame that the game was never localized. Fortunately, a group of loyal long-time fans of the series (detailed further in the article) are working on an unofficial English localization of the game.