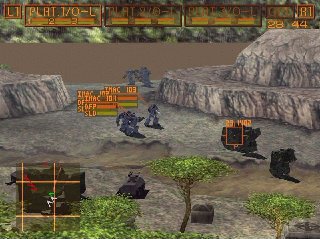 Developed alongside Front Mission 2, Front Mission Alternative was finished months after the former’s release. Released in 1997 for the PlayStation, the game is a real-time strategy (RTS) spin-off. It was made to help recoup the large development costs used in making Front Mission 2.

Front Mission Alternative is the earliest entry in the canon timeline, set decades before the other installments. The story revolves around the African Conflict in 2034 and details the beginnings of the wanzer as a military-use weapon.

The main protagonist, Earl is an OCU lieutenant and a member of the Independent Mobile Assault Company (IMAC). The OCU sends him and two other soldiers, Bruce Blakewood and Dal Furphy, to SAUS in the OAC when the African Conflict begins.

Ide is a colonel for the South African United States (SAUS) and the commanding officer of IMAC. One of the representatives of SAUS’ government, he participates in the African Conflict on its behalf to bring peace back into the continent. 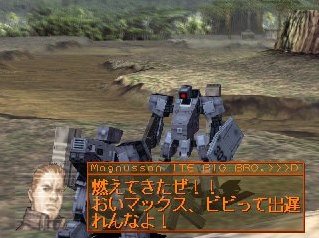 Front Mission Alternative, in terms of graphical power, is on equal footing with Front Mission 2 due to sharing the same development tools. It does differ in a number of areas; load times are much faster, the battlefields are fully in 3D, and the frame rates are rock-solid. The game’s art is handled by Ryuichiro Kutsuzawa (Wachenroder) and continues the trend of gritty realism started in Front Mission 2. It’s not as beautiful as Jun Suemi’s work in the aforementioned installment, but it’s a decent fit nonetheless. Music, on the other hand, is a real oddity in that disc jockey (DJ) Riow Arai composed Front Mission Alternative. The techno tracks Arai composes certainly feels a bit out of place with the settings. Certainly there are great tracks, such as “Airport” and “Ending”, but one should approach the whole score with an open mind. The sound effects, fortunately, are more natural fit with the game.

As an RTS, Front Mission Alternative‘s options are limited. Players only control a platoon’s movement, their behavior, and how they attack. The real depth in the game lies in its other features. The new range system allows ranged weapons to act like such; accuracy is now affected by range. Weapon functionality is also changed, like grenades firing in an arc-like trajectory. Auxiliary backpacks have also been greatly expanded upon, from anti-missile guns to night vision scopes. Players can also call in air support to repair wanzers and reload ammo. Front Mission Alternative also retains 2’s job system with some changes. Through point allocation, the player controls their characters’ roles. Instead of randomly activated skills, role proficiency yields abilities that the AI uses in combat. Finally, briefings return; in addition to viewing battlefields, players can now review mission details from enemies to topography. 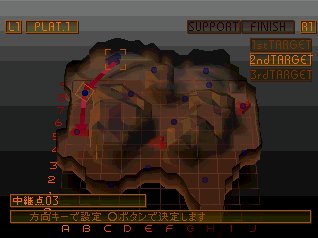 In many ways, the “Alternative” moniker is a proper fit for this series entry. There are a lot of things it experiments with and if it weren’t for the story elements, this game wouldn’t be Front Mission. These experiments aren’t exclusive to Front Mission Alternative though. Many of them make their way into the future titles in more refined forms. Some of the notable ones are the range system (Front Mission 3, 4, 5), diverse auxiliary backpacks (4 and 5), and ability-oriented job system (Front Mission Online). The game is also the first to have branching mission paths and multiple endings, as well as a ranking system complete with rewards. Even though Front Mission Alternative can be cleared faster than the other entries, these features make it worth replaying. It may not be the deepest RTS, but it does a good job of introducing newcomers to the genre.

Front Mission Alternative was released only in Japan. However, a group of loyal long-time fans of the series (detailed further in the article) are working on an unofficial English localization of the game.