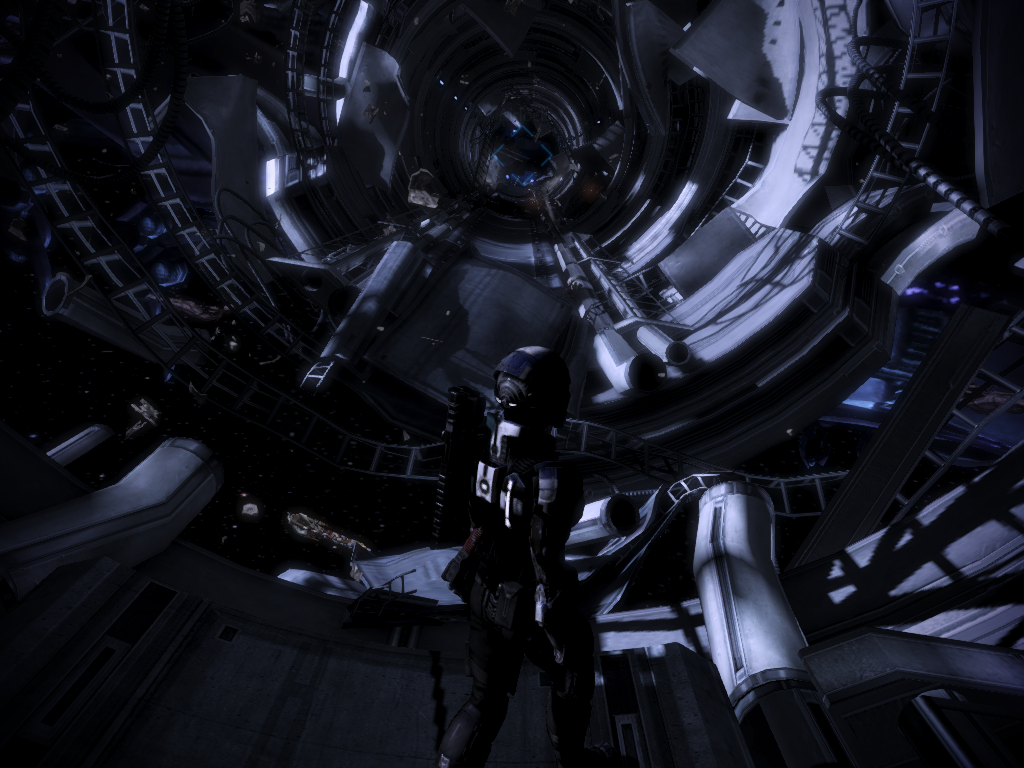 Mass Effect 3 was a milestone, but not for the reasons Bioware may have wanted. This was the game that really cemented the vast hatred for EA, the growing negative opinion of Bioware, and created such a storm of rage that few games can claim they aroused reactions on such a level. That’s not to say it’s a bad game, mind you. In fact, it may be the best of the series. The problem was that this was a game published by EA as they started to go further into unpopular business practices, and its biggest flaws all stem from this one factor – plus and odd case of trying to meet audience expectations and some really iffy creative decisions.

Taking place after the last game, Shepard is on Earth and on trial (if you did the Arrival DLC). However, none of that matters when the Alliance command starts to realize that Shepard wasn’t making up the Reapers. They’ve called them here to confirm what they already know, as reports of bases in their systems have lost communication. The Reapers quickly slam down from a nearby mass relay, and Shepard escapes with help of Captain Anderson, Kaiden or Ashley (depending on your decisions on a major plot world in 1), and a soldier named James. They have a new mission: Get the rest of the galaxy in shape and throw everything at the Reapers in a last ditch attempt to prevent another cycle of harvest. Liara, Kaiden/Ashley, Garrus, and Tali all return to the party (Garrus and Tali depending on surviving 2‘s suicide run), alongside three new party members… 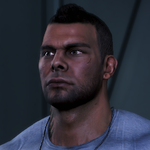 James Vega: One of the soldiers who helps Shepard get off planet. He’s a big pile of muscle nominated for the N7 program Shepard came from, the Grunt replacement for the game. The only squad member more uninteresting than both Kaiden and Jacob, with his main characteristics being making good eggs, giving everyone lame nicknames, and saying random Spanish words. 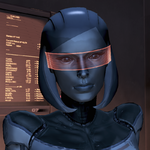 EDI: The Normandy SR-2’s AI helper from 2, who gains a body here after capturing a Cerberus killbot that looks weirdly like a 1950s housewife. Has a decoy power and the ever useful overload skill. Sadly in a relationship with Joker. 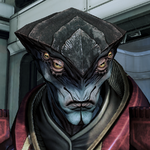 Javik: The sole DLC character and the last Prothean, the only one to survive in a freeze pod due to all the others losing power. Unfortunately for Liara, Javik is not a scientist but a soldier, and a very angry one at that. He fights with strong biotics, not too useful against reaper enemies, but can pull off shields on Cerberus shield units. In culture shock now that the primitive species are running things, which is perfectly understandable.

The battle system shows polish not even 2 had, with faster combat and improved targeting with powers, plus a wide variety of enemies that require more creative strategies. The management stuff from 2 is gone, now replaced with a new side assignments structure where you collect war assists, which you need to make any sort of headway at game’s end. The side assignments are basic, with the game tossing out the first’s assignment structure entirely for scavenging planets and a few simple narrative side bits. This should be a change for the worse, especially with the inclusion of reaper patrols and the scarcity of oil for traveling within systems, but it really means the team has more time to polish the main story sequences and character convos to a sheen. It also helps these small diversions are all connected by a shared trauma and fear of the Reapers, with Shepard having to snap all of these races and people out of it to do some good. Unlike the games before it, Mass Effect 3‘s main story swallows every aspect of the game in it, which ultimately benefits both tone and mood. 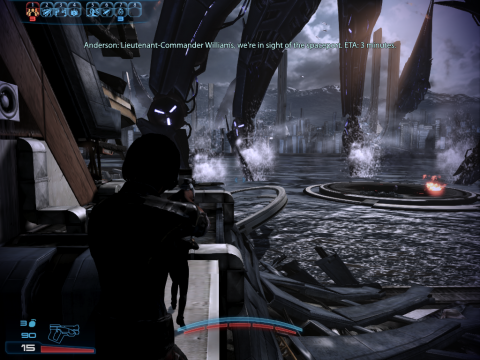 Said story has left many divided, but only for a few scant elements. On the whole, Mass Effect 3 creates a fantastic, fulfilling ending for the story of Commander Shepard, bringing various conflicts and stories to a close from every part of the trilogy, including DLC campaigns. Three of the four mission DLCs here are damn impressive as well (Javik’s is very basic, and definitely shouldn’t have cost anything). Leviathan gives some unexpected answers to who the Reapers are and introduces some almost Lovecraftian elements to the franchise lore. Omega might seem the most unnecessary of the bunch, with Shepard helping crime lord Aria from 2 reclaim Omega, but it has some of the best character writing in the game, along with the most grueling and rewarding battles. Of course, Citadel is the best DLC of the series, and possibly some of the best DLC ever made, celebrating every single past squad-mate in the series (except Legion, very oddly), giving a hilarious romp of an extra campaign, and just lets the cast be in the moment and shoot the shit in the most fun ways. It was the perfect send off to these characters, a send off few franchises can ever hope to craft.

On the downside, Cerberus make for awful villains here, since it’s incredibly obvious from the start they’re already indoctrinated. None of their actions make any sense, and now they’ve become some sort of a chuuni ninja squad, with literal actual ninjas on their payroll. They give smoke bombs to giant mechs, for crying out loud! Kai Leng is, without a doubt, the single worst villain in the whole franchise, powered entirely by cutscene invulnerability, while he’s one of the easiest boss enemies to fight in the game. The Illusive Man, the mysterious leader you met in 2, also just comes off as a discount, much dumber Saren, and it’s not terribly interesting. 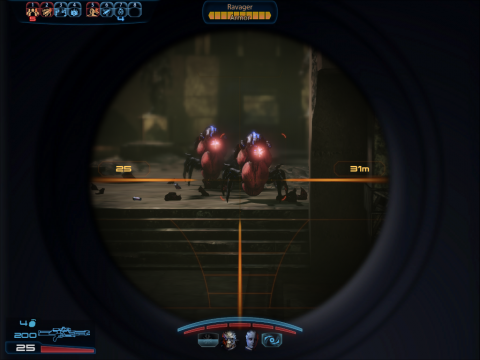 The endings were also hotly debated and had to be patched with the “extended cut” DLC to better explain what exactly happens in said endings. This is partly a result of a change in writing staff, tossing out a planned dark energy plot that was being built up in 2 with dying star subplots. It’s also rumored that these changes were made partly because the player base guessed at Bioware’s end game and they had to come up with a new final reveal. What they came up with is a bit old hat, and weirdly unfitting with a particular choice the game lets you make, but the issues with these endings have been greatly exaggerated. An odd logic hole here and there hardly makes them terrible, and the backlash seems more like a result of over hype.

What is unforgivable, though, was that the game originally locked you out of these endings unless you played the multiplayer mode. The main game originally had very finite numbers for war assets, but even if you got the minimum, it wasn’t really the minimum. There’s a “galactic readiness” mechanic in place that bottoms out your assets effectiveness at 50%, and the only way you can grow that stat to 100% and have the assets work properly is to grow it through multiplayer matches. The mode itself is actually pretty fun, with a team of four online players having to work together to accomplish goals on a map and survive a series of waves, letting you earn credits or use your own money to open early loot boxes for a chance at new items and characters (which is a tad icky, but not as bad as it is now, and credit flow is at least generous here). However, making this mode mandatory to *finish* the game itself is absurd, especially because this mode will eventually die with a lack of players or a shut down server, and the extended cut patches this bad idea out with higher asset values. There was also bonuses given from playing a mobile game called Mass Effect: Infiltrator, but the war asset given wasn’t enough to offset all of this. 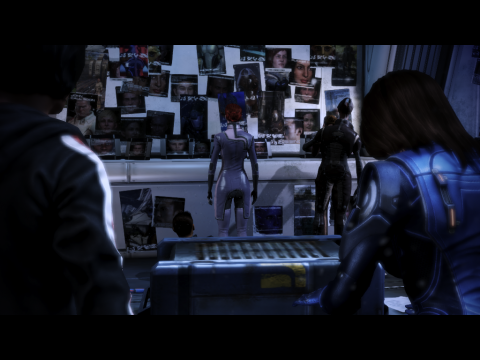 It’s also worth noting that the art direction is a tad off this time around. While the graphics are vastly improved on the whole, there are new graphical bugs popping up, especially on the PC version. Femshep’s hair becomes outright transparent in the wrong lighting. The game also goes further into sexualizing the cast, or just poorly translates the designs of the old games into thew glossy sheen here. This results in stuff like female characters having absurdly large and shiny lips, or skin tone not showing up quite right. 2 had problems with shadows if you were playing as a black Shepard, making you look like some sort of hidden demon at points, but this problem has worsened here, and sometimes skin just reflects light for no reason. It’s bizarre.

Still, these are mainly nitpicks, or just small issues in a large package that makes the most out of its budget and scale. Trying to top Mass Effect 2 is an absurd idea, and trying to do it didn’t work out as Bioware may have wanted, but what they managed anyways is impressive in its own right. The character writing is aces across the board, the new powers to play with are a load of fun, the combat sections are more tense and rewarding for creative players, and the story really brings a sense of finality that wouldn’t have been possible in the old set-up. For all Mass Effect 3 gets wrong, it gets so much more right.