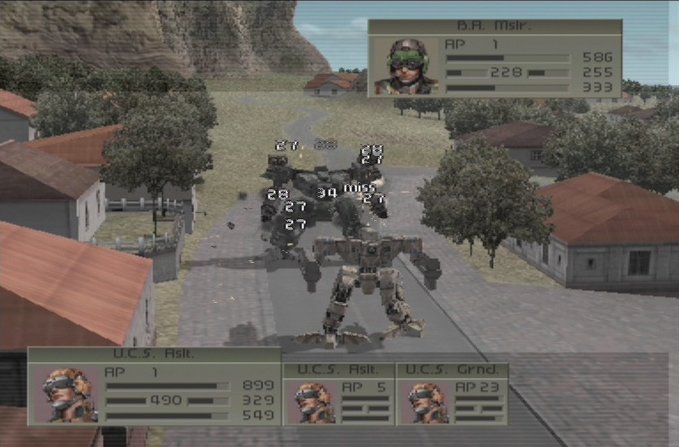 When the Front Mission Project was first announced, two games were revealed: the remake of the original Front Mission, and Front Mission 4, which was released in 2003 for the Sony PlayStation 2.

Set in 2096, Front Mission 4 takes place after the original game, but years before the other sequels. The game uses two scenarios that switch back and forth, like in Front Mission 2, but here the two scenarios never merge during the storyline, despite a direct link connecting them together. The main scenario involves an EC research organization known as the Durandal. The Durandal take part in an investigation to discover who perpetrated a series of German base assaults. The second scenario takes place in Venezuela, when it declares independence from the USN. A large detachment from the USN military is sent to liberate the country.

The main female protagonist, Elsa is a former EC French Army soldier and the newest Durandal recruit. She served in the French Army for a few years before she transferred over to the Durandal. A stickler for honesty, Elsa does not back down when she knows something is wrong.

Zead is a former EC British Army soldier and the commanding officer of the Durandal. He oversees all operations involving the research organization and is also its main representative. Zead is seen as a father figure by his colleagues due to how he treats them with respect and dignity.

The main male protagonist, Darril is a USN sergeant and the leader of the 332nd Mobile Company. Once a promising soldier with potential, he was demoted from captain to sergeant after an unfortunate tangle with a commanding officer. Darril has become disillusioned about military life since then.

Billy is a USN corporal and a member of the 332nd Mobile Company. He has known and worked with Darril for years, addressing him as an equal despite the rank differences. Billy craves entertainment and is not contempt with living a boring life. 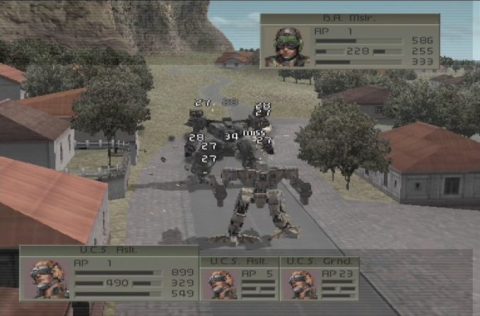 Even though Front Mission 4 is a PlayStation 2 game, there’s not much of a change in presentation, even right down to the character portraits. Fortunately, the portraits are drawn by Yusuke Naora and never get boring to look at. The stylish character art does not save the rest of the visuals from a case of blandness. Even though the graphics are a step up from the previous games, they feel washed out due to poor use of colors. Nevertheless, Front Mission 4‘s visuals do the job and within its genre, are among the best of its era. Hidenori Iwasaki makes his official debut as a composer and he does a respectable job here. Iwasaki’s tracks convey the situations nicely and while lacking any standout pieces, are consistent in their quality. The voice-overs are nicely done, even with the cheesy foreign accents. The sound effects are more realistic and well executed in here, which is a nice plus.

Although the presentation lacks any major changes, this does not apply to game mechanics. As the radical cutbacks in Front Mission 3 were not well received, it was designed with Front Mission 2 in mind. A number of elements from the said installment were brought back, such as the concept of flanking. The job system returns, with each pilot having a role in which they perform best at. The major addition to this entry is the Links system. Essentially an updated version of the Honor system, Links allows units to link up with each other to provide offensive and defensive support. While particular skills from Front Missions 2 and 3 allowed for this, this is the first game that makes this option into a normal feature. Setting Links can be a problem as the player has to specify who is linked to whom, and what actions they will take. Lastly, the scale of missions has been restored to Front Mission 1st levels. 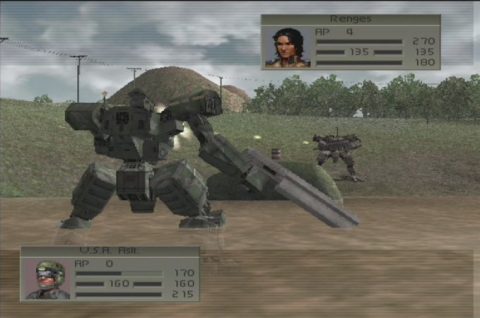 Front Mission 4 is a respectable entry in the series, but it leaves a lot to be desired. A lot of features common to Front Mission are noticeably missing, such as the Arena, and the game as a whole feels rushed. The presentation is lackluster, the interface is messy and cumbersome to use, and the story has pacing and character development problems. There are also game balancing issues, from the poor enemy AI to unusual enemy Link placements (one enemy could be linked to another on the other side of a map). Even though it was reported that most of the game’s developers were new to the series, these problems should have been rectified before release. The game is still worth playing even with these flaws… it just lacks the polish of its predecessors. Aside from the Battle Simulator, Front Mission 4 doesn’t have much in the way of replay value.