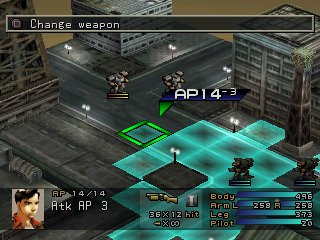 Two years after the release of the previous Front Mission entry, Front Mission 3 was released on the PlayStation in 1999. It also has the distinction of being the first game in the series to receive localizations outside of Japan.

Taking place in 2112, the story of Front Mission 3 is split into two scenarios: the Da Han Zhong (DHZ) and the USN. What’s unique about the scenarios is that they never link up and as a result, can be considered full-fledged stories. Both scenarios share a number of major events however so their stories are somewhat the same in this sense. The main focus of the stories revolves around a new USN weapon codenamed the M.I.D.A.S.

The main protagonist of the game, Kazuki is a wanzer test pilot for Kirishima Heavy Industries. He was a knack for adapting to new piloting interfaces quickly and is one of the company’s good test pilots. Kazuki is overly protective of his adopted sister Alisa and hates his father Isao for reasons unknown.

A wanzer test pilot for Kirishima Heavy Industries, Ryogo is a friend of Kazuki’s. He has a habit of slacking off on the job, which often makes Kazuki mad. Ryogo is, however, more laid-back and sociable than Kazuki, who tends to come off as being too stubborn and one-track minded.

The main protagonist of the DHZ scenario, Alisa is a scientist for the Japanese Defense Force (JDF). She was adopted into the Takemura family at some point in her life, but the reasons behind it are unknown. Alisa is a calm and caring person who genuinely loves her father Isao and brother Kazuki.

The main protagonist of the USN scenario, Emma is a scientist for the USN military. Her history is a complete unknown other than the fact that she works for the Federal Agency of Intelligence (FAI), the USN’s main intelligence organization. Emma is a curious sort who takes pride in her research work. 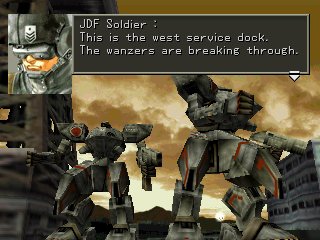 To rectify the load times of Front Mission 2, Front Mission 3‘s graphics take a step back from its predecessor’s visual prowess. For example, battle sequences now take place on the map itself (by zooming in on a specific area) without having to load another area like in past entries. Art direction is handled by Akihiro Yamada. (RahXephon) The character artwork is attractive, but their 3D models are bland in comparison. Koji Hayama (Cho Aniki) and Hayato Matsuo (Ogre Battle) composed the score for Front Mission 3. As in the first game, there’s a contrast of styles between Hayama’s electronic pieces like “Scout Unit” and Matsuo’s orchestral tracks like “Determination”. The game is also the first entry to have voice-overs, with languages including English, Japanese, and Russian. Lastly, the sound effects get some changes, but are less powerful as a whole compared to Front Mission 2.

Front Mission 3 is a regression of its predecessor’s strategic depth and opts for simplicity. Missions have been greatly reduced in scale; battlefields are much smaller, players can only use four units max, and enemy numbers hover around eight at most. There’s no job system to encourage role specialization as well. Skills are now learned by equipping wanzer parts this time around. Some features such as Front Mission 2‘s Action Points and Alternative’s range system return, but in more simplified forms. Despite these changes, the game does have new features. Pilots can board, dismount, or be forcefully ejected from their machines. Players can upgrade their wanzers’ abilities, albeit in a linear fashion. The Battle Simulator lets players train their pilots on virtual battlefields to gain money and experience. If a character is attacked, there’s a random chance that they’ll be ejected from their mech. Essentially this just causes them to lose a turn, but it’s possible to kill a pilot when they’re unprotected, or even hijack enemy mechs. Enemies can also surrender if they feel the odds are too stacked against them (usually when their arms are blown off) and their mechs can be nabbed after you’ve won. In turn, you can sell it for scrap, use the parts to equip other mechs, or even put one of your own pilots in it. Lastly, the Network from Front Mission 2 is greatly expanded upon, like the new e-mail feature. 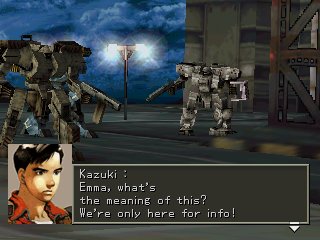 Due to its design shift, Front Mission 3 is arguably the most player-friendly entry in the series. There are not a lot of things to keep track of, and the difficulty is noticeably lower than the previous entries. The game also boasts replay value through its two scenarios, with their distinct stories and cast of characters. Allies in one side become enemies in the other; the outcomes are different, and so on. The return of Alternative’s ranking system also adds to this, with bonuses being given for clearing missions efficiently. All of this is great for newcomers to the series, but not so much for long-time fans. For the few steps it takes forward, Front Mission 3 takes much more steps backwards in terms of game design. The storytelling also takes steps backwards; there’s many “filler” moments in both scenarios, and a lot of characters are too one-dimensional and lack the depth of the usual Front Mission cast. 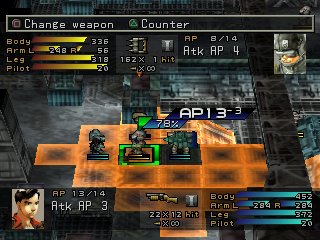