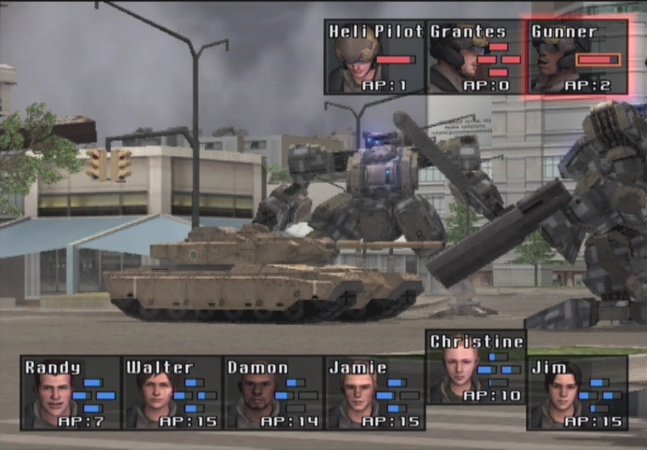 The main product from the Front Mission Project line, Front Mission 5: Scars of the War, was released on the PlayStation 2 in 2005. It is the pinnacle of the series, being a culmination of the best elements of the previous games. It’s the perfect tribute to the fans who have stuck with the series from day one. While it draws heavily the first two games – the most liked installments – Scars of the War leaves none of its predecessors empty-handed.

The story of Scars of the War encompasses the entire timeline established in the previous Front Mission games and takes place over five decades. As the series conclusion, all unresolved on-going stories are covered and are eventually concluded decisively. The lion’s shares of these stories are from Front Mission 1st and 2, with the rest taking the leftovers. These on-going stories run in sync with the standalone story, which covers the life of Walter Feng and his military career over the decades. A major focus of the story revolves around the physical, mental, and emotional damages that war inflicts on all persons involved, combatant or non-combatant.

The main male protagonist, Walter is a soldier for the USN military. Early in his life, he was scarred by a shell casing in the outbreak of the 1st Huffman Conflict. Walter and his best friend, Randy O’Neill, became war orphans after their families were killed. The two were taken in by the USN after the war.

A USN soldier, Randy is one of Walter’s childhood friends before the 1st Huffman Conflict began. Orphaned after his family was killed during the war, he and Walter were then made into citizens of the USN. Randy’s a bit of a dope, but he’s a good person who believes in the rules and fair play.

A soldier for the OCU GDF, Glen is also one of Walter’s childhood friends before the 1st Huffman Conflict. During the war’s outbreak, he was scarred trying to save Walter from a wanzer’s shell casings. He stayed with the OCU after the war, putting him squarely against his friends on the opposite side.

The main female protagonist, Lynn is the commanding officer of the Strike Wyverns assault unit. Like Walter, she became a war orphan after the 1st Huffman Conflict. Once a shy kid who loved books, Lynn is a strict, demanding leader feared by her colleagues after she enlisted in the USN military. 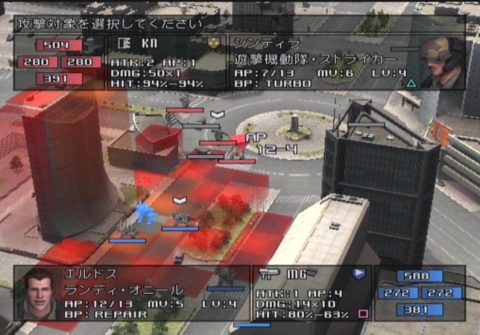 The visual presentation in Scars of the War is a massive improvement over the direct predecessor. For the first time, the game delves into cinematic cut-scene storytelling. Instead of watching 2D portraits of characters, players are treated to a fully realized 3D world like in Front Mission Online. Using the graphics engine of the PlayStation 2 Final Fantasy games, Scars of the War is an extremely gorgeous game. Backgrounds are more vibrant, wanzers are more detailed, and a ton of special effects serve to enhance the overall impact. The battle sequences are also more engaging thanks to dynamic camera angles that emulate war footage. In a nod to Front Mission 2, these begin with combatants getting into position, who then start attacking once they stop moving. Lastly, Yusuke Naora returns to provide art direction and even though his stylish character artwork is not seen in the game, it translates well into 3D.

Hidenori Iwasaki returns as the composer, with help from Kenichiro Fukui (Einhander) and Yasuhiro Yamanaka (Code Age Commanders). Iwasaki’s growth as a composer is evident in his compositions for the game; tracks such as “War of the Titans” and “Scars of the War” are lively, powerful, and memorable. Also, some of the tracks are re-arrangements from ones found in Front Mission Online (“A Minefield”), Front Mission 3 (“Invasion”) and Front Mission 4 (“Lock and Load”). Complementing the music are voice-overs and sound effects. While they are in Japanese, the voice-overs are beautiful, convey a large range of emotions, and avoid problems that many Japanese games tend to have, like high-pitched voices. The sound effects are more diverse and booming than ever, from the sound of wanzers walking on water to artillery rockets raining hell from above. 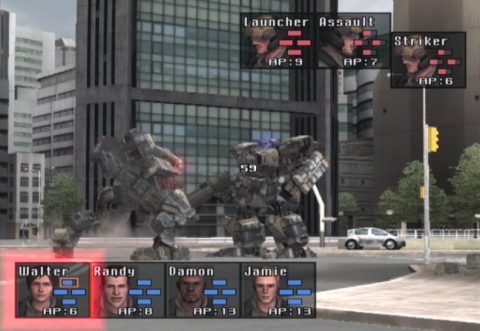 Like Front Mission 4, Scars of the War‘s game mechanics are heavily influenced by Front Mission 2. The difference in here is that the game finishes the job its predecessor could not do. The job system is a mix of Front Mission 2 and 4, in that training in other roles is not discouraged, but specializing yields the most rewards. Likewise, elements of the Honor system return, particularly the concepts of leader units and pilot types. By eliminating the leader unit of a linked squad, the combat effectiveness of the aforementioned squad drops. Pilot types are improved in that during Links, they may or may not provide support depending on the situation at hand. (Aggressive pilots will act even in friendly fire cases) Front Mission Alternative‘s briefings, 1st‘s Arena, 3‘s upgrades, and 4‘s Links are some more of the features brought back in Scars of the War.

The game also introduces new features, such as recruiting pilots, Survival Simulator, and friendly fire. After a certain point in the game, players are free to recruit pilots to suit their needs. Survival Simulator is a mode where players go through a number of floors and collect gear to be used in the main game, much like the Item World in Nippon Ichi’s Disgaea. In terms of friendly fire, ranged weapons now shoot through any unit in the line of fire. The interface has been upgraded in that many menus have been integrated into one main system. With new options such as part sorting, setting up your units is much easier now. Finally, the massive scale battles of Front Mission 2 have returned as well. 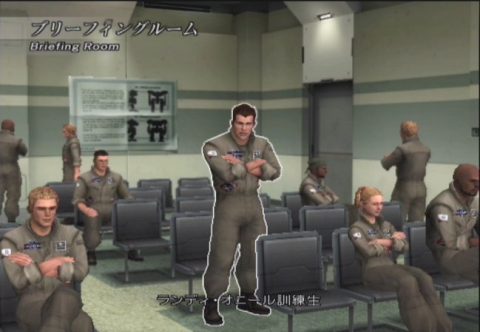 Through the greatly improved presentation and game mechanics, Scars of the War hits the right notes in every area. When Toshiro Tsuchida remarked that he wanted the series to go out with a bang in a Japanese interview, he meant every word of it. It’s clear that a lot of effort and care went into the game’s development and as a result, it’s hard to really single out any major flaws in the design. The only noticeable flaw lies in storytelling as the game was clearly made for the series fan that played all of the previous installments. Additionally, understanding the game mangas and graphic novels also plays a role in the story’s impact. Series newcomers can enjoy the well-crafted standalone story for sure, but the more immersed one is into Front Mission, the stronger the impact of the whole story. Series fans can find hundreds of nods and references throughout the game, ones that newcomers will likely not pick up.

Unfortunately, Front Mission 5: Scars of the War was only released in Japan. An official English localization was apparently planned at some point, but the idea was never made into a reality. The poor sales of Front Mission 4 overseas are often used as a reason, but a more likely reason is Square’s poor handling of the series outside of Japan. As many of the Front Mission games were never localized, it would be difficult to release a game that is very dependent on them for maximum story impact. Thankfully, a group of loyal long-time fans of the series completed an unofficial English localization of Scars of the War.