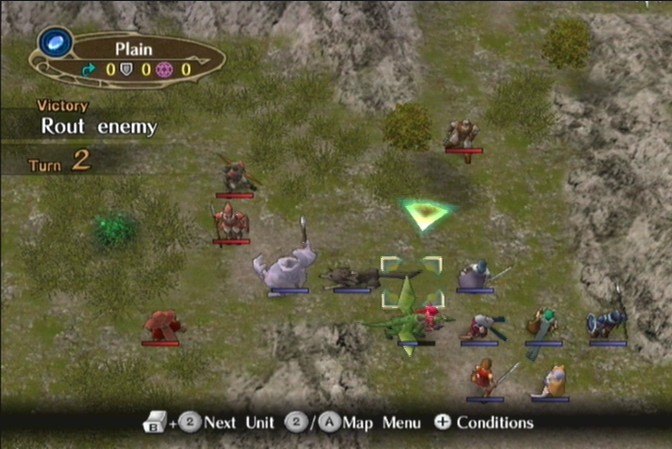 Much like other games that were duologies (FE1 and 3, FE4 and 5, FE6 and 7), Radiant Dawn, is a direct sequel to Path of Radiance. Taking place three years after its predecessor, the story covers a wider scope of groups and events ranging from the liberation of the nation of Daein from the currently occupying Begnion empire, the Crimean rebellion against Queen Elincia, and the exploits of the Griel Mercenaries and the Laguz alliance to stop Begnion’s rapid push for control. The game is separated into four chapters focusing on each of these three groups, eventually bringing them all together to form a grand finale, somewhat like Odin Sphere.

The main character of the first chapter, who is commonly referred to as “The Silver Haired Maiden”. She’s a member of the Dawn Brigade, who are fighting against the Begnion empire. Despite her extremely young look, she is wise and mature far beyond her years.

A relatively minor character from Path of Radiance, Sothe is also part of the Dawn Brigade. Here he is a powerful Rogue, much stronger than before. He is one of the first units that can handle just about everything and often will be instrumental in pulling the party through the first chapter.

The orphan of Daien’s former king. Accompanied by a shady self-appointed strategist, Izuka, and Micaiah’s forces, he seeks to liberate his country.

Now the Queen of Crimea, she struggles desperately to regain order in the land and prove her worth as a leader. She takes center stage of the extremely short second chapter.

Leader of Crimea’s Royal Knights and devout supporter of the queen. He wields a very mean lance and is a force to be reckoned with. The rest of the order, however, pales in comparison. (Save for Kieran.) One of the main combatants of the second chapter.

Path of Radiance‘s poster boy seems a little weak at first, though towards the end, he becomes an amazing fighter. He continues to run the Griel Mercenaries and is hired by the Laguz Alliance to assist them in an assault on Begnion. Returns with most of the cast from the last game to star in the third chapter.

Nephew of the Lion King Caineghis, he’s in charge of the Laguz Alliance and leads the charge to attack Begnion. However, his strong headed recklessness does get in the way frequently.

Grand Commander of the Begnion Army, he is tasked with driving the Laguz from Begnion’s territory. Though seemingly loyal to the Senators, he often has a far more effective and personal way of handling things. There’s probably more to him than meets the eye. 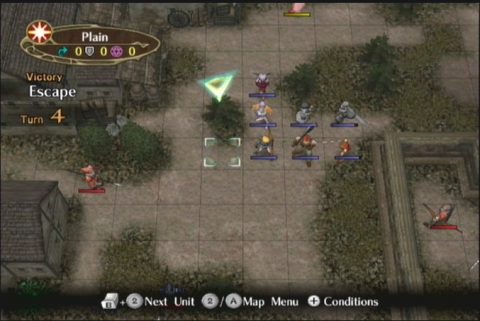 As one can guess, with an expansive number of events to cover, the development of a majority of the cast gets skipped over. Though Fire Emblem never has been a series known well for its plotlines, things seem especially thin here, which is sad, seeing as how much of the cast of the previous entry was very charming and fleshened out. Here, characters are introduced, given a few lines about their lives or inner conflicts, then forgotten completely. It makes sense – there are over seventy playable characters, which is obviously a huge number – but it still feels too brief. The utter destruction of support conversations that helped develop characters in the last game just pours more salt on the wound.

The fact that it’s a sequel to the GameCube game may make it difficult for newcomers to jump in (even though the connections don’t really begin until the second chapter), and there are more reasons why Fire Emblem rookies should steer clear. Radiant Dawn caters to the hardcore Fire Emblem crowd by cranking up the difficulty right at the beginning. The Easy mode isn’t too overwhelming, but the Normal mode is absolutely punishing. Most will storm into the intro map expecting nothing, only to find that their units can’t take any punishment and can deal very little damage. Worse yet, it’s difficult for all the wrong reasons, because the units you control themselves have extremely poor stats in comparison to the forces they must fight. On top of this, the Laguz units have been nerfed to the extreme. As a result of this difficulty spike, this is the first game since Seisen no Keifu that allows you to permanently save your game in the middle of battle, without being overwritten when you reload it. This allows you to take some chances and give you another shot if something doesn’t go your way. The problem is, it ends up coming to the point where the standard procedure to winning a battle is constantly quick saving and hoping you did everything to a tee. That’s not strategy, that’s just frustrating. The quicksave is also only available in the English release, and is not available in the higher difficulty settings. 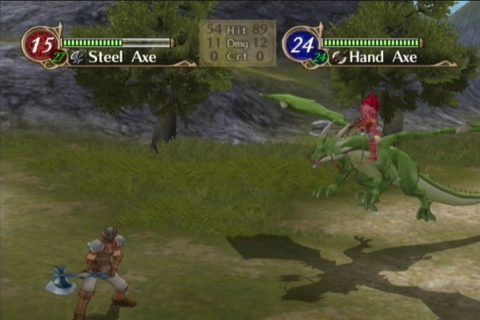 However, towards the midway point, the difficulty evens out a bit when you get better characters, making it quite a bit more bearable and more in line with Path of Radiance. Sadly, the game still tends to feed you characters that are worthless beyond redemption, like the incredibly weak heavy knight Meg). Bench warmer characters have been a common occurrence among strategy RPGs in general, but Path of Radiance was so well-balanced that it’s impossible to not miss its achievement.

There are a handful additions to the mechanics. The terrain can how have different elevations, requiring that you climb up and down, and units on higher terrain can do more damage. You can import data from the GameCube game, allowing for returning characters to have beefed up stats. The Laguz can now gain more levels, and human characters can be promoted twice. Dark magic spells, missing from Path of Radiance, are back. There are also a few new classes, and a crossbow weapon for archers, which allows them to attack directly adjacent squares. The support system has changed so you can allow any character to support any other character. However, each character can only have one support, and it’s missing all of the cool conversations that were found in previous games. 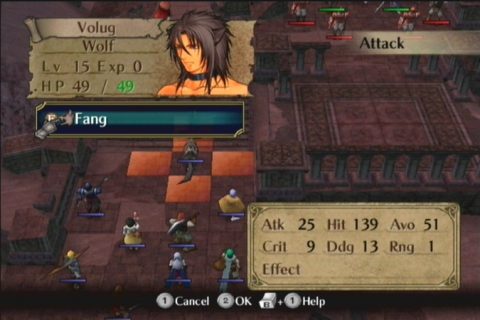 The graphics are adequate, although they’re not much better than the GameCube game. The game does not use any Wiimote pointer functionality either, requiring that you turn the remote on its side to play, although there’s now an option for widescreen display. The battle animations are still somewhat poor, but they’re a bit less stiff and more dynamic. The FMV cut scenes look pretty nice, and fortunately there are more of them, with tolerable voice acting to boot. The soundtrack once again is rather standard fare, and memorable tracks are few and far between.

In the end, Radiant Dawn is still a quality title, but it comes off rather too vicious for casual players. For newcomers, it is recommended to try out the GameCube installment first.