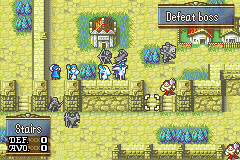 Fire Emblem: The Sacred Stones, modeled after Fire Emblem Gaiden, hit the GBA shortly after Rekka no Ken and it shows. With numerous bugs and typos (even in the Japanese version), this game was horribly rushed to market. This installment of the Fire Emblem series was also released in North America, giving the world its first taste of Fire Emblem Gaiden‘s over world map exploration, extra monster battles, level grinding, branching class changes, and multiple main characters. In addition to being given more freedom over how your characters progress, there are three “Trainee” characters, very obviously meant to resemble Gaiden‘s villagers, who can traverse the lance-wielding, axe-wielding, and mage trees, respectively. Sacred Stones built upon class-exclusive skills as well. 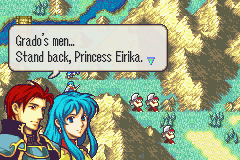 Unfortunately, only four ‘skills’ exist in the game, and most of them are useless. The Assassin’s “Silencer” skill was already present in the last game, making its new classification as a ‘skill’ redundant; the Sniper’s ‘Sure Shot’ skill ensures that his next attack will hit, which would be great if Snipers didn’t already have insane accuracy to begin with; the Generals possess a ‘Great Shield’ ability which occasionally renders them invulnerable for a turn (again, what would be a great skill on pretty much anyone but a General, considering they usually don’t take much damage anyway); Pierce (essentially Holyn’s Moonlight Hit from Fire Emblem 4), a Wyvern Knight skill, voids the enemy’s defense stat and does direct damage, and is actually useful. But Pierce also has a chance of causing a game-breaking glitch if you happen to pierce when using a long-range weapon. Disappointments aside, Sacred Stones is still worth playing, and worthy of the Fire Emblem name.

As for the story – an ancient evil was sealed away with the power of 5 powerful stones. The Grado Empire seeks to collect and destroy these stones which have kept evil at bay. Twins Eirika and Ephraim are twin heirs to the throne of Renais, both of whom have separate quests at first. After the Empire of Grado suddenly attacks Renais, the king orders Seth, one of his most trusted generals, to get his daughter Eirika to safety.

Your typical, kind-hearted Princess who doesn’t like to fight. She eventually meets up with her brother, although the two spend much of the game along different paths. She spends most of the game under the protection of the game’s pre-promoted Paladin, Seth. In battle she’s more or less a carbon-copy of Lyndis.

Eirika’s twin-brother and supreme badass. He shares his twin sister’s noble heart, but holds much less compunction about fighting. Ephraim holds the distinction of being the first Lord (and first playable character since Fire Emblem Gaiden, really) to be an unmounted Lance-user.

Prince of Grado and childhood friend of Eirika and Ephraim. Lyon possesses Eirika’s same reluctance to fight, albeit to an even greater extent, and although kind is a rather lonely character. He becomes more important as the game progresses, eventually becoming the game’s antagonist. 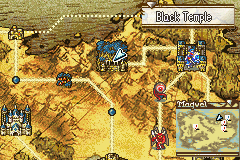 Although the rest of the cast feels somewhat stiff, the three main characters are unusually fleshed out. Lyon is Nintendo’s attempt at making a sympathetic villain, giving him a Suikoden 3-like motivation, and for the most part it works pretty well, although he could have afforded to have a bit more screen time. There are also some issues regarding his character and who’s-in-control-of-whom that are never quite ironed out.

The game has none of the trial maps that Fuuin no Tsurugi had, although it has a similar post-game extra in the form of the Tower and the Ruins, both optional, multi-level dungeons filled with monsters which can be completed to unlock secret characters. The difficulty of the Ruins is substantially higher than than the main quest, possibly to help compensate for how mind-numbingly easy the game is. Not surprisingly, however, the Ruins don’t really come off as difficult so much as simply tedious; the enemies still don’t provide your maxed out team with much of a challenge, they just take hours to clear out. The Link Arena from Rekka no Ken also makes a return, as does the staple Sound Room and Support Conversation Viewer. 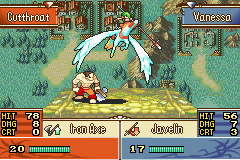 So far, The Sacred Stones has the distinction of being the sole self-contained Fire Emblem game in the series, with no sequels or prequels linked to it.