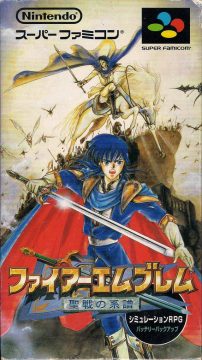 Released on May 14th of 1996, the fourth installment in the Fire Emblem series marks an introduction of major new game play elements, many of which current players of Fire Emblem are likely to recognize. Most notably, Fire Emblem: Seisen no Keifu (“Genealogies of War”) introduced the “weapons triangle”, a rock-paper-scissors relationship between types of magic spells and melee weapons. For example, spears are powerful against swords, swords are powerful against axes, axes are powerful against spears. For magic, fire beats wind, wind beats thunder, and thunder beats fire. There are also light and dark magic spells, which exists outside of the established triangle. Additionally, if a mounted unit has any extra movement remaining, they can continue to move after attacking. The foundations for the support system and many others were also first laid in this game. 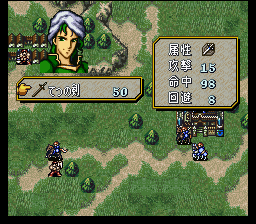 Seisen no Keifu leaves behind the adventures of Marth and focuses on a whole new land. The back story is quite typical – long ago, twelve heroes vanquished the dark god Loptyr using twelve divine weapons. After the war, each hero established kingdoms where the descendants of the original twelve continued to rule. Each heroic line kept one of the divine weapons for themselves and the balance of power maintained peace. The story of the game proper begins when Verdane, the one kingdom lacking in any lineage to the twelve heroes, invades Grannvale, a kingdom comprised of many houses related to the ancient heroes. Soon, the whole continent is at war, as various events occur that disturb the old balance of power. So much for peace through divine weapon proliferation!

Seisen no Keifu paved the way for a lot of new features to be refined in later incarnations of the game, and deviates from the standard formula in ways that have yet to be revisited in any other Fire Emblem game. For instance, halfway through the game, a terrible tragedy strikes your army. The story then fast forwards a few decades, to focus on the main characters’ children. One of the most interesting elements of this has to be “Love and War” system. During the first half of the game, players can attempt to make their units to fall in love with each other. When they reach a certain level of intimacy, they’ll get married, have kids and pass on their divine blood and individual skills on to the children. When next to each other on the map, lovers will get a chance to score a critical hit (marked by swirling hearts around the attacking unit before the battle animation kicks in.) The stats of parent characters also determine the starting stats and growth patterns of the children. If certain characters fail to fall in love, there are some default units that will fill in the void. Most of those are pretty weak.

Main character and descendant of the holy knight Baldo. He is heir to the holy blade Tyrfing, which closely resembles the Falchion from Fire Emblem 3. Has the distinction of being the first Lord in the series to be an exceptionally powerful unit.

The mysterious maiden of the forest is a long lost descendant of Naga, the dragon of light and Loptyr, the dark god. She weds Sigurd after fighting alongside him.

Heir to the house of Velthomer and the great sage Fala’s amazing Valflame spell. He also carries the blood of the dark god Loptyr.

A descendant of the master swordsman Ordo and inheritor of the Astra Sword skill, which lets her attack five times in a row. She is a princess of Isaach, a nation recently ruined in the current wave of turmoil.

She is a noble in the house of Junguvi, the house of the hero Ulir. As a cleric, she has no weapon skills whatsoever and is unable to fight back when Verdane attacks her castle.

One of Sigurd’s best friends and wielder of Noba’s holy lance, Gae Bolg. He married Sigurd’s younger sister Ethlyn and rules the Kingdom of Leonster.

The king of Nordion and long-time friend of Sigurd and Quan. He’s a descendant of Hezul and wields the mystic blade Mystletainn.

The son of Sigurd and Deirdre and all around twerp. He must finish the war that his parents started.

The dark prince born from all the blood of Loptyr through the union of Arvis and Deirdre. He’s a master manipulator who rapidly usurps power from his father and plans to take over the whole continent.

Julius’ twin sister and polar opposite. The blood of Naga flows strongly in her veins, and she is very skilled with light magic, fire magic and healing staves.

The son of Ethlyn and Quan has matured into a strong fighter under the stewardship of Finn. Together, he and Finn try and protect Leonster to the best of their abilities.

Isaach’s lost king and wielder of the holy Balmung sword. He’s a powerful Sword Master and versed in Astra Sword, like his aunt Ayra.

Head of a cult that worships Loptyr and seeks the revival of the dark dragon. 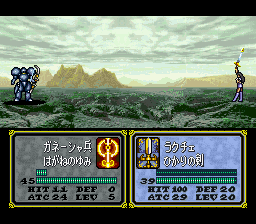 The way in which chapters are presented is different as well. All of the maps are huge and feature multiple castles to conquer, making each scenario far longer than in the previous games. However, there are fewer scenarios in general, with a total of twelve stages. If your main castle falls, it’s game over, but you can assign defenders to individual castles as well. Shops, arenas, blacksmiths, storage and fortune tellers can all be found in castles, plus units can be promoted in the main castle without the need for items. Conquering castles on the map triggers more events and generates new objectives. The sheer size of the maps gave mounted and flying units phenomenal advantages. There are some instances in the game that demand that players’ armies haul booty, which can be a problem to characters not on a horse. The amount of available characters in each chapter has been reduced and each unit is given a special skill to minimize the bench warmer count. All units are deployed at all times, and most are unique to their class.

Not all of the changes are for the better. The individualized skill system makes certain staples, such as advancing attack (getting a second hit in after your enemy attacks your unit if their speed is high enough) and critical hits into skills that only a select few units have. These skills aren’t balanced very well, especially in the second half of the game. Many of the more interesting skills were rebalanced and revived in Fire Emblem: Path of Radiance for GameCube. Characters also have thirty levels total – the levels don’t reset after a class change, which isn’t necessarily a bad thing. However, to gamers used to maxing characters out before promoting, it feels like a rip off when characters can’t enjoy the full stat gains from their promotions. The biggest peeve of Fire Emblem has to be the fact your characters cannot freely trade weapons. Each individual unit has their own wallet, which they can use to buy new weapons and repair existing ones. Like in most Fire Emblem games, weapons have limited uses, but if a weapon runs out here, it doesn’t disappear from inventory, but rather remains as a broken weapon, and can be completely repaired at an armory. 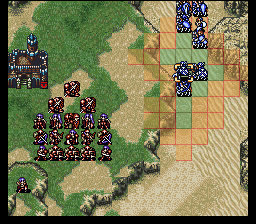 The graphics have improved quite a bit over the previous game, with far more detailed graphics, much better battle animations and cool special effects. The soundtrack is much better, too, with a huge selection of tracks. This game is often touted by many long time Fire Emblem fans as the best of the series, and should definitely be played just to see how different it is from the others.