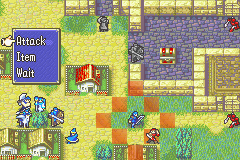 Rekka no Ken (“Blazing Sword”, AKA Fire Emblem 7) takes place several years before its predecessor and tells the story of Roy’s father Eliwood and Lilina’s father Hector. Both men have their own quests in the game after playing through the first 10 chapters as Lyn. Players start out going through Eliwood’s quest, but should they decide to replay the game, they can choose to play as Hector, whose campaign is considerably longer, has different maps and has a wider cast of characters. 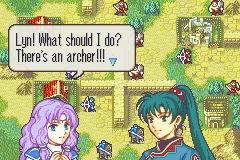 The gameplay in Rekka no Ken doesn’t bring any remarkable change from Fuuin no Tsurugi. Its main achievement is being the first game in the Fire Emblem franchise to be officially released outside of Japan, simply dubbed Fire Emblem, without any subtitles. For once, the English speaking masses would be able to purchase a Fire Emblem game in stores.

The thief, a staple of the Fire Emblem series, has long been somewhat of a nuisance, due to his necessity in the team as a chest looter, lockpick, and, well, thief. In addition to being a traditional member of the team, he has also been, traditionally, unable to promote, resulting in a unit that is largely inadequate to engage in combat past mid-game (not that many thieves were exactly excellent combat units to begin with). This has been rectified here with the inclusion of a promotion for the Thief class, the Assassin. In exchange for giving up the ability to steal, the Thief now gets the opportunity to develop stats for another 20 levels, as well as the ability to perform an instant-kill attack (dubbed “OHKO” or one-hit K.O. by fans prior to the official naming ‘Silencer’ in Fire Emblem 8), activating roughly half as often as a normal critical hit. 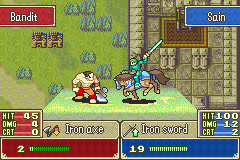 Merlinus appears in the game as well, but since this takes place a number of years before the events of the previous game, he does not yet have a wagon, and instead spends most of the game as a stationary tent placed on a random tile of the map. He nonetheless requires protection, as units will often try to attack the tent if they see no other easy target, but for every level you decide to bring him he will gain one level, greatly increasing his ability to dodge, although how an entire tent manages to dodge an attack is never really explained…

Possibly in trying to appeal to Western gamers, Fire Emblem 7 is the first game in the series in which the player is not simply assumed to be the Lord and main character, but is instead a non-combatant named Mark (although the player can change the name), who serves as the army’s tactician. The integration of the Tactician into the story is on the whole rather sloppy, as characters will sometimes turn towards the camera and address the player, particularly during the game’s prologue and epilogue, but for about 90% of the game the characters converse purely amongst themselves, meaning the player/Tactician is either not present or is eavesdropping and staring awkwardly at them. There’s also a ‘Tactician bonus’ given to characters who share the same affinity as the Tactician (in addition to being asked for a name, the player is also prompted for a birth date, which determines this affinity), but the bonus is largely negligible, and the ‘Tactician’ character altogether feels like a poor attempt at ‘pulling the player in’. Coupled with the fact that Lyn’s tutorial mode is unskippable on first playthrough, the game received its share of criticism from Fire Emblem purists. 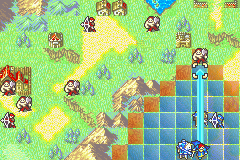 The main story is rather cliche, but it does a good job of supporting the game and giving purpose to all the characters. The evil lord Nergal wants to open the Dragon’s Gate – a portal to the realm where the Manaketes were sealed. He has powerful human-like creations called “Morphs” aiding him by creating chaos in the world. Again, it’s the characters that make the plot feel worthwhile. Many family members of other units in Fuuin no Tsurugi appear again. When playing the games in in-universe chronological order, Fire Emblem 6 takes on a noticeably darker tone, bearing in mind the characters of Fire Emblem 7 and their assumed fates, given the opening events of Fire Emblem 6.

Roy’s father and your typical big-hearted, albeit somewhat dimwitted hero. Wields a sword and a sense of justice.

The hot headed Ostian Lord who swings a mean axe. He’s tough, he’s brash and has a biting sense of humor.

Supposedly the last of the Lorca tribe, but she’s really a noble of Caelin. Lyn’s chapter is basically a tutorial to familiarize gamers with the mechanics of Fire Emblem, thus this whole section will be a breeze for veterans.

The main bad guy. Always gotta have one of these, don’t ya? 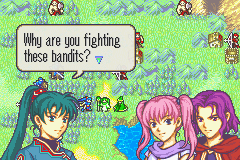 Trial maps and unlockable characters are absent here, Nintendo probably supposing that three separate character quests and unlockable hard modes for each would suffice. The game also includes a multiplayer battle arena, in which players can construct a team of five characters and pit them against either computer controlled teams or against fellow players via the link cable. It also continued Fire Emblem 6‘s inclusion of an unlockable Sound Room and Support Room, where one could read all of the various support conversations between characters that had been unlocked.

In an attempt to boost either Fire Emblem sales or Mario Kart sales, those who pre-ordered Mario Kart: Double Dash were given a bonus disk that contained, among other things, a set of exclusive bonus items that could be transferred from the GameCube to the Fire Emblem GBA cart, and then given to the party on any given playthrough. The items ranged from stat-boosting relics to special weapons, although none of them were particularly useful, other than that they tended to last longer than most weapons. Their translation was also noticeably rushed, as the item descriptions contained several typos and glitches. Transferring from the bonus disk also unlocked two songs in the sound room, both of which were remixes from older Fire Emblem games. 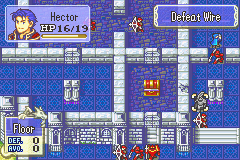 The game was released in the US with minimal changes. The final level was made slightly easier (the doors housing the bosses open at a slower rate, giving the player more time to take two out before another two approach), and the Dragon Riders were renamed “Wyvern Riders”. This was likely to avoid confusion, as a major plot point of the game centers on reviving the ancient race of the Dragons (which are evidently not the same, tame dragons of which Nergal has a dozen battalions’ full). The game was also released in Europe, where a few characters’ names were inexplicably changed. The game also had a post-credit ending sequence, attempting to foreshadow the events of Fuuin no Tsurugi and further tie the two games together. This remained in the US version, but was removed from the European version.