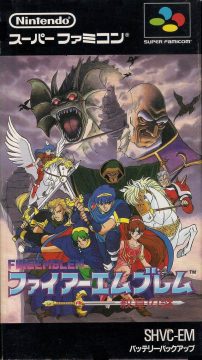 Two years after Fire Emblem Gaiden, Nintendo brought the series to the Super Famicom. The story of Monshō no Nazo (“Mystery of the Emblem”) goes back to Archanea, the land from the first game. A year has passed since Marth supposedly defeated Medeus and brought peace to the land. Hardin and Nyna have married, forming the Archanean Empire, consisting of Archanea, Aurelis, Macedon and Grust. Prince Marth is sent by Hardin to investigate a rebellion in Grust and suppress it. There, he discovers that Hardin has been extraordinarily harsh on Grust’s populous. Being the kindhearted fellow he is, Prince Marth recruits many of his old friends from the first Fire Emblem, and fights against his former allies of the corrupt Archanean Empire.

The Prince of Altea is a bit older but not exactly wiser. After chasing rebellions in Grust and Macedon, Altea falls into Hardin’s hands…

The new emperor of Archanea has completely flown off the handle. He marches around with the Gradius lance that Camus used to wield.

She’s grown up and as the God Dragon, she is now a force to reckon with. She’s one of the few allies on your side who can damage Medeus.

Who here isn’t surprised that he’s back? Only this time, he’s in an even more powerful form. 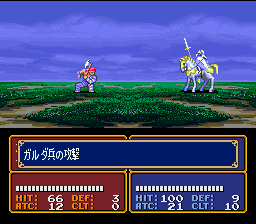 From a gameplay perspective, Fire Emblem: Mystery of the Emblem plays like the first game without any notable innovation. Mounted units can get off their steeds at any point, but that’s one of the only changes. There’s a much heavier focus on the storyline, with chapter introductions and much more dialogue between characters. The interface has been considerably overhauled, so you can actually see your movement range when you highlight a unit, and stats are easily viewable. The characters move much quicker, too.

The graphics have also been upgraded, but compared to other Super Famicom titles being released at the time (notably Final Fantasy IV), Monshou no Nazo‘s graphics are relative antiquated. On the plus side, the animation during the battle scenes is amazingly fluid, and they can now be turned off if you prefer quick play. The sprites look fantastic, and there are plenty of nice background details, like the clouds in the background or the glimmering heat waves in the deserts. You can even make out the twang of the bow strings after arrows are fired. Though minor, these touches add a lot of life to the otherwise primitive graphics. The music has also been upgraded, but some of the songs haven’t been implemented particularly well and sound rather hollow. The art style also settles into the shoujo manga-inspired looks that continues throughout the rest of the games. 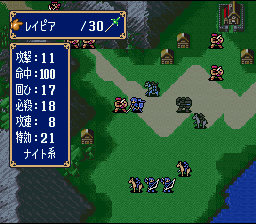 There are two campaigns, or “chapters,” contained in Monshō no Nazo. The second chapter, entitled “War of Heroes” is new, but the first chapter is the aforementioned remake of the original Fire Emblem using the updated graphics and interface. However, it’s missing about five chapters as well as the playable units that appeared in them, so it’s not entirely complete. At the same time, they weren’t exactly essential and the overall story doesn’t really suffer for it.