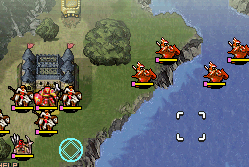 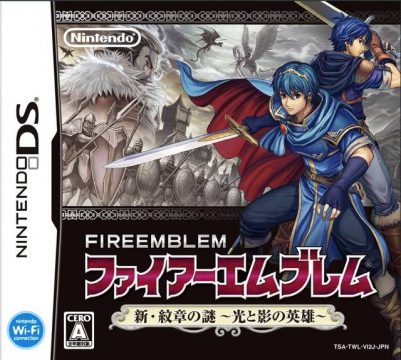 With Shadow Dragon having received its second remake for the DS, it was within reason to assume that the next move Nintendo would make would be to remake its sequel, Monshou no Nazo. Being a remake, the game’s basic storyline is mostly the same as before: a couple years had passed since Marth and his friends defeated Medeus and Gharnef, and peace was restored. However, suddenly and unexpectedly, one of Marth’s most trusted allies, Hardin, the newly-christened Emperor of Akaneia, became an evil and power-hungry man seeking to conquer the continent, and it’s up to Marth and his friends to get to the bottom of his sudden madness and stop him.

There is one major difference between the original story and the remake’s story: While Marth would be remembered throughout history as a hero-king, there was another hero, a close friend of his, whom history had forgotten (the original Monshou no Nazo is depicted as the “official” account of the story, while the remake is considered the “true” version of the events).

Shin Monshou no Nazo‘s player-created main character, who was raised by their grandfather, a former knight of Alteea. My Unit is an aspiring knight who discovers and foils an assassination attempt on Marth, and thus becomes his personal champion, confidant, and friend. Since My Unit is the most available of all characters in the game and has crazy stat growth, they can easily become the strongest character in the player’s army.

My Unit’s first and closest friend during their days in Altea’s Knight Academy, she is an aspiring tactician, rather than an active fighter. While she is friendly and kind, she has a dark background and a hidden agenda…

A thoroughly psychotic berserker working for a mysterious organization of assassins, who never stays dead for long. Called “Roro” in Japan and the fan translation, but his official English name is Legion, as revealed in Fire Emblem: Awakening, where he is a downloadable character. 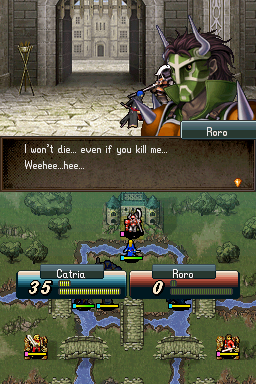 Shin Monshou no Nazo‘s graphics are identical to those of Shadow Dragon, but this is nothing unusual, as the only time the series had changed graphical engines on the same platform was between the original Monshō no Nazo and Seisen no Keifu. The base mechanics are largely unchanged, which is also standard for the series, but the class change system that was introduced in the previous game had received a minor tweak: Promoted female units can now change class to General. However, like in Shadow Dragon, the Mercenary, Hunter, Fighter, Pirate, and Dark Mage class lines are still male-only, while the only classes exclusive to female characters are Pegasus Knight and Falcon Knight.

The most noticeable characteristic of the Fire Emblem series as a whole is, without a doubt, its “permadeath” mechanic, and while it encourages the player to think things through, makes every decision count and subsequently leads to a lot of edge-of-the-seat tension and excitement, it’s also made it a fairly intimidating series for newcomers, while others just don’t want to feel forced to restart a chapter, especially a long one, every time they lose a character. Shin Monshō no Nazo is the first game in the series to rectify this by introducing a new “Casual Mode,” which eliminates the characters’ mortality; If they are defeated in combat, they are only gone for the duration of the map rather than the entire game, making it a much more accessible game than any installment in the series before it. For series veterans that prefer the challenge, however, there is the option to play the game in “Classic Mode.” 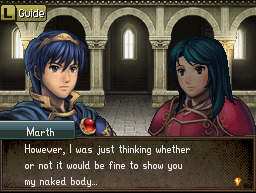 One of the most noticeable new features introduced in Shin Monshō no Nazo is the addition of My Unit, a brand new character. The player determines their name, gender, starting class, appearance, and background. This character is clearly meant to be an expansion on the tactician from Rekka no Ken, though in this case, the My Unit has far more presence, playing a much more active role, with the addition of eight prologue chapters that revolve around them (which play out a lot like Lyn’s chapters in Rekka no Ken, minus a forced tutorial), and almost all the cutscenes from the original game have been redone to include this character. Unlike the tactician though, who was given the “silent protagonist” treatment, My Unit has dialogue and personality, making them feel more like an actual character, rather than a virtual representation of the player. This is hardly a bad thing, though; In fact, considering how poorly Rekka no Ken‘s tactician was implemented, this is a considerable improvement.

While it’s nice to see a JRPG give the player the creative freedom to make an individual character, My Unit does have a couple flaws. Most glaringly, the female My Unit is subject to the same aforementioned class limitations as all the other female characters, which is an appalling unequality (she is not statistically inferior to her male counterpart, though). Secondly, My Unit’s availability, growths, and stats in general are well above almost any other recruitable character in the game, to the point of being game breaking (this is furthered by the fact that My Unit’s background choices, besides altering a few lines of dialogue, serve the hidden function of determining starting stats and stat growth bonuses, players can work to their advantage, they know what they’re doing). Whether or not this is a bad thing, however, depends on the player’s preferences. Some Fire Emblem fans prefer the strategic element, while others prefer a group of superpowered characters plowing through much larger enemy armies. Fortunately for those that fall under the former, it isn’t mandatory to use My Unit after the prologue. 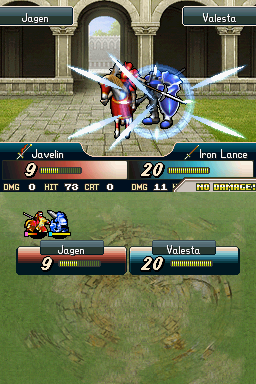 Support conversations, something that was disappointingly absent from Shadow Dragon, return here, coming up in the “Talk” option of the battle preparation screen, whenever two certain characters are deployed together a certain number of times. Also, My Unit is able to support with absolutely anyone, providing them, even the characters that were practically non-entities (ie. the three axe fighters that joined alongside Ogma in Shadow Dragon), a much-needed chance to have some backstory, depth, or simply screen time and dialogue.

New options on the preparation menu include “Drill Grounds” and “How’s Everyone.” The Drill Grounds provide the chance the level up characters for a price, similar to the arenas. Unlike the arenas (which are only available in a handful of chapters), however, there is no payback for defeating opponents, a battle forecast is provided for each new enemy, and the player’s weapons are used and subsequently worn down. This can work to the player’s advantage, as stronger weapons can make the battles easier, and since the game is somewhat generous with Bullion items (items that can be sold for a lot of money), and the battles are fairly cheap, it can be used as a means of level grinding. While this can potentially trivialize the game’s challenge, it’s not entirely unwelcome, as there were means of level grinding in previous games, they just weren’t as obvious or quick, so an opportunity that respects the player’s time is not necessarily a bad thing. For those that prefer not to grind, the Drill Grounds are entirely optional, anyway. 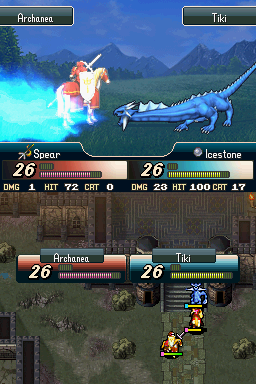 As for “How’s Everyone,” as the game is played, or while the player is away from the game, a “clock” of sorts fills up, and depending on how much time has passed, there are either a few or a decent number of scenes where random characters find rare items, automatically gain experience points, gain temporary stat boosts, or have their relationship with another character (usually My Unit) raised slightly. While this sounds simple, and it is, it’s actually an interesting feature as it rewards the player for taking time away from the game. Since several modern Nintendo games periodically encourage the player to take breaks, it’s strange that they hadn’t run with this more.

Like in Shadow Dragon, there are new side quests in this game as well, revolving around a group of assassins trying to kill Marth. Like before, they offer the chance to recruit some otherwise hidden characters, in addition to revealing a secondary storyline. Fortunately, the ridiculous and counterproductive method of accessing side quests by having a certain number of characters killed off is ditched in favor of completing the preceding stages within a certain number of turns (oddly, the limit increases with higher difficulty settings) or by fulfilling certain secondary objectives, which most players would have done anyway in many cases. More often than not, they will be unlocked and accessed even without the player even consciously working toward them.

Unlike its Super Famicom counterpart, this remake does not have the storyline and maps of Shadow Dragon built into it. It does, however, include the four chapters of BS Fire Emblem, accessible from the “Extras” menu, under “Chronicles,” acting as something of a challenge mode. 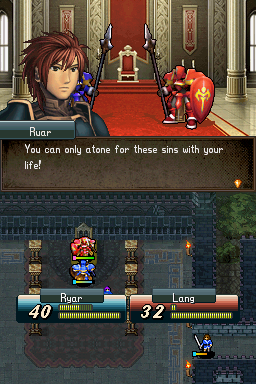 Naturally, being a remake, the soundtrack mostly consists of remixed music from the Super Famicom original, which is to say its music is solid overall. Also, due to the new prologue and side quests, new musical tracks have been added, such as the heroic “Carve a New History” and the awesome boss theme, “Tearing Shadows.”

Sadly, Shin Monshou no Nazo did not see an overseas release. By the time it was made, America’s library of DS games was late into its lifespan, as the 3DS was gaining momentum (not that it stopped several Pokemon games from being released within the same time frame, but those likely had much higher sales expectations). As a result, it is the first game in the series since the first GBA title to not be released in the US. Hope of playing it in English is not lost, however, as it received an excellent fan translation by The Heroes of Shadow. Infuriatingly, given that the title supports DSi functions, that means that the game is region locked, and is unplayable on non-Japanese DSi systems (it will still work on regular DS systems, at least).

All in all, Shin Monshou no Nazo is an excellent remake, certainly a better remake than Shadow Dragon, mainly because it feels less like a remake and more like its own game, due to having more than enough added content to make it feel fresh, and it’s unfortunate that a wider audience will not get the chance to play this game.