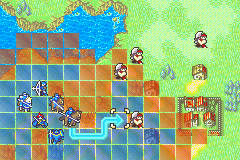 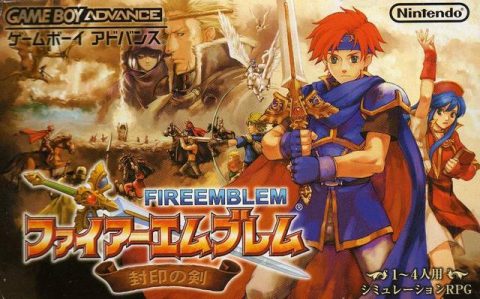 Lead designer and director Shouzo Kaga left Nintendo to start his own company where he went on to create Emblem Saga/Tear Ring Saga for the original PlayStation and Berwick Saga for the PlayStation 2. Purportedly there was a Fire Emblem being developed for the Nintendo 64 DD, which never materialized. Fan speculation, however, holds that some of the game’s story and/or core mechanics may have transferred to the GBA title, due to an early beta screenshot of two characters who are not to be found in the actual game, and the 64DD game’s working title, “Maiden in the Darkness,” an epitaph given to a certain late-game character in this game. 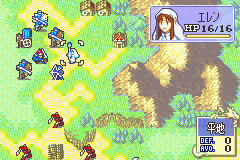 As far as gameplay goes, Fuuin no Tsurugi (“The Sealed Sword”) feels like a watered-down successor of Thracia 776. The graphics have been shrunk down and brightened quite a bit, undoubtedly to make it easier to see on the original Game Boy Advance screen, but otherwise the visuals are pretty similar. Although unit death is still permanent, a huge drop in difficulty makes the game feel considerably more mass market compatible than predecessors. This isn’t entirely surprising, seeing how the franchise really painted itself into the obscurity corner by staying on the Super Famicom.

The most notable improvement of previous features that Fuuin no Tsurugi brings to the table is multiple support conversations between characters. Rather than lovers and siblings being the only means of raising chances of critical hits and other bonuses between friendly units, characters that fight in adjacent squares can have support conversations, which serve to give the units more personality and explore back story. They also gain more stats as they fight with each other. The magic system has also been reworked to better integrate the light and dark spell types. 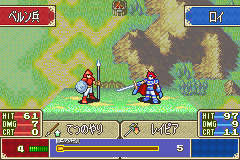 This is a new chapter in the Fire Emblem saga, with no direct relations to the previous games. 1000 years ago, humans fought Manaketes (the humanoids that can turn into dragons). The war came to an end when the demon dragon by the name of Idoun was sealed. The land of Bern has gathered an army in a bid to take over the entire continent of Elibe. A new hero named Roy gathers an army to free his home land and the rest of the world from the tyranny of King Zephiel. One of the coolest moments of the game is when Roy finally obtains the Sword of Seals and manages to decimate a whole army with it alone. There are a few bonus maps afterwards that let you mess around with this immense power.

This perky mage is the daughter of Hector, the Marquis of Ostia. She’s a childhood friend of Roy’s.

Bern’s tyrannical king, hellbent on taking over the continent. He poisoned his father to ascend the throne faster and uses dubious means to gain power. To think he was such a cute, sweet little kid when the English speaking world first met him!

Zephiel’s younger sister and not a big fan of his plans. 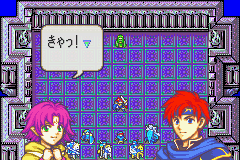 The gameplay of Fire Emblem 6 is, on the whole, a step back from the epic, large-scale nature of Fire Emblem 4 and the utterly frantic nature of Thracia 776, back to the slightly smaller scales of Marth’s saga (where the series has mostly remained ever since). The number of characters allowed to be brought into each mission varies depending on the chapter, but the number never ventures far beyond 15, and the objective for every mission is nearly always to simply seize the enemy castle at the end of the map. Item management is also handled now by a peddler named Merlinus, who functions as a unit driving a wagon with absolutely no combat abilities. He’s somewhat of a pain to keep out of harm’s way, but is absolutely essential if you want to be able to manage your vast inventory of weapons.

Perhaps realizing that the core gameplay was not quite as deep or expansive as the later SNES installments, Nintendo put in a number of features designed to encourage multiple playthroughs. In addition to the game having several alternate versions of a few levels (depending on which members of your party are better-leveled at the time), the game also boasted three endings and post-game bonuses such as trial maps and unlockable secret characters. The characters included, among others, Eliwood and Hector (although American gamers who played the sequel first might find to their dismay that the characters do not resemble their younger Lord-counterparts, but are merely a Paladin and a General, respectively), Zephiel, and Guinivere – the latter requires a full nine playthroughs to unlock.