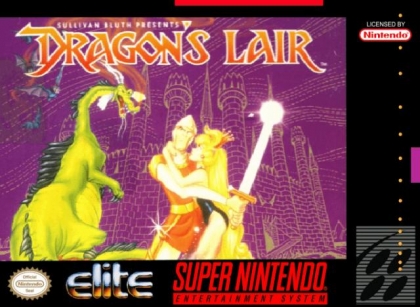 Made by the same company as the NES version, this game is actually not quite as bad, but that’s not saying much. The SNES version of Dragon’s Lair is still a terrible game of ruined potential. It has decent graphics, but everything else seems to be pulled down by the weight of good ideas being implemented poorly.

The controls are horribly slippery. Dirk skids and slides all over the place as if he were on an ice-skating rink, and his two attacks, either throwing a weak weapon or swinging his strong sword, both have issues. His weak projectiles travel only about a quarter of the screen, do very little damage, and are hard to aim properly. The sword, while much stronger, has a tiny hitbox and swings diagonally down, as if Dirk were trying to golf with it, which results in it being useless against enemies even slightly above him. Grabbing the ropes used to climb or descend to different areas of the level is a chore as well, as it’s not enough for Dirk to simply be able to reach them with his hands, he has to have his whole body be in front of the rope, legs and all, for him to even be able to hold onto it, which leads to many a botched jump. 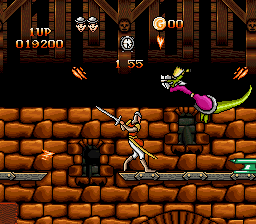 The game has a map screen where you decide what level to play, but it doesn’t really matter, as there are none of the alternate paths that you would expect from such a setup, and the level design is awkward at best, with lots of levels having a random mishmash of platforms, ropes, and paths, many of which are both optional and useless, unless you count as important score items, a throwing weapon that arcs slightly differently, or a health restorative if you’re lucky. Sometimes exploration will even lead to punishment, like a throwing weapon that will return like a boomerang and do damage to Dirk if it hits him. In most cases, it is far more prudent to simply beeline for the end of the level. The enemy design is all over the place. Many of the monsters you will face are pulled straight from the game, and while some of the new additions make sense, others will leave you scratching your head, like the flying Singe heads that teleport in and home in on you.

At the very least, the presentation is good in most areas. The graphics are detailed and colorful. The different environments Dirk travels through are all distinct and well rendered, featuring parallax scrolling and some neat graphical effects like the fog on the first level, or lightning lighting up windows on the second. The sound effects are good, featuring a lot of voice samples for Dirk and the enemies, as well as some decent sounding sword swings and other such effects, but unfortunately, Dirk’s grunts quickly become repetitive and annoying, making the same grunt every time he jumps or climbs a rope. The music, in stark contrast, features lots of uninspired tracks, all of which have a horrible synthetic sound to them that are an insult to the powerful SNES sound hardware. The Options menu song in particular sounds nothing like what you would expect from Dragon’s Lair.

Dragon’s Lair for the SNES obviously had serviceable aspirations, but as it stands, it is only the best of the 2D platformers in the series by default, with Its decent presentation outweighed by frustrating gameplay and hard to manage controls.