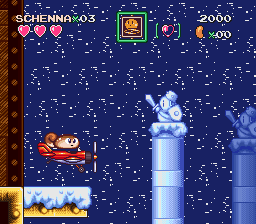 In 1994 Game Freak decided to expand upon its earlier slime platformer, taking the same mechanics with an entirely new plot. The sequel is centered around an amusement park known as Jelly Land. A group of five kids and their dog are heading to the park for fun and games until a jester wizard zaps them all, transforming them into slimes before capturing all but one kid. The main blue blob boy named Marine must now tracked down his friends (and dog) before taking on the jester that’s caused the amusement park to go berserk.

Rather than have the strict linear progression of its prequel, Jelly Boy 2 opts for a Mega Man style choose-your-stage approach with five levels open from the start. Each attraction you choose to go to is broken into five sections, usually having a mid-boss around the end of the 2nd or 3rd segment before the stage boss guarding one of Marine’s kidnapped companions. Each slime saved becomes selectable before the start of a level, each with his or her own unique abilities. Marine is the default with the standard ball attack from the first game, now always available with a recharge timer added. His true skill is being the fastest of the group. Mint is the green-haired/green blob girl with the star in her hair, able to fling the barette like a boomerang without recharging at the cost of movement speed. Carm is the shy girl blob with the bow, having no special means of attack and is one of the slowest characters but was planned to be the fastest swimmer by using her bow as a propeller. However, the unfinished ROM as-is has her still matching the same swimming speed as the others. Carm’s only advantage left is being able to climb down from certain ceiling angles without dropping. Ed is the glasses-wearing purple blob, able to leap higher than the rest and can lay proximity bombs that can burst through certain breakable blocks most of his friends can’t. Schenna the dog blob, like Carm, has no special attack, but can hover slowly in his descent with his tail. The chubby kid-turned-orange blob York can’t jump quite as high and drops like a rock, but has a swift dash attack that can also break blocks Ed’s bombs can. 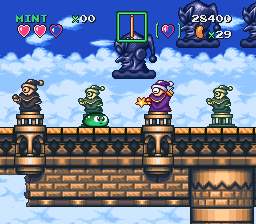 Naturally, the presentation is a step up from the original from three years prior. Each level represents a themed area a Disney-esque amusement park might have, ranging from pirates to a lost prehistoric jungle temple to a space world and even, yes, an old-fashioned Western-slash-Ninja setting. The easily-squishable mice from the first game still run rampart but are joined by many new threats – a lot of the them clown-based. Your same old wall-sliming and tube-travelling methods are back as well as you inch your way toward the exit door to the next segment of the stage. The controls have been tweaked to make climbing and dashing a smoother experience. Your attack and run commands each now have their own separate button assigned to them, no longer forcing you to waste a power-up just to hoof it faster and scurry up a ledge. The kids’ unique traits and attacks encourage varied playthroughs for the best means of tackling levels. Sadly, Yoshinori Sunahara’s music score is much more forgettable than the tracks from Smart Ball. 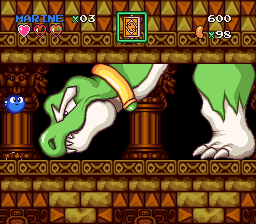 Many design streamlining and changes serve to make the sequel a bit more by-the-numbers than its predecessor. Gone is any towns to visit or NPCs, as well as the unique power-ups due to the characters’ built-in movesets. Instead, players collect jelly beans for 1ups with each batch of 100, along with health hearts – though as a twist, collecting a heart with full life makes you invincible for a limited time. To remedy this, the game puts more emphasis on finding secrets, needing slimes’ skills to find doors leading to such treasures as empty heart pieces to collect to increase your health bar and nine mysterious black puzzle pieces in order to see the true final boss and ending. It can be a pain to scour and stumble onto these hidden pathways, but being able to hop right into each level section eases the journey. 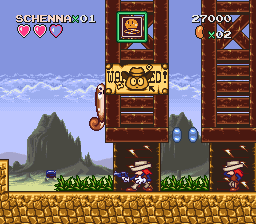 Jelly Boy 2 was shaping up to be a good if a little underwhelming sequel. However, Sony cut production of video game projects not tied to their new PlayStation console, leaving this title cancelled before its near-completion. The late-stage beta ROM leaked onto the net a decade later, now complete with a translation hack for those wishing to experience the title. It’s so near-finished the only thing aside from a little gameplay polish is the heart of the rougher first game. The charm is there in spades, but without other humans around to breathe life, this amusement park ride feels emptier.