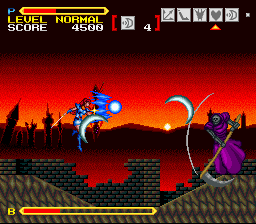 The only Valis game to be released for the SNES relates to Valis IV like Castlevania: Dracula X does to Rondo of Blood – except its even less of the same game. And even more so than Dracula X, Super Valis IV is mostly defined by features that went missing in the transition. All the animated cut scenes are gone, of course, with nothing but a bare intro left to very briefly summarize the general plot of the game. The two other playable characters are not so much as mentioned, and Lena doesn’t even have the ground slide, anymore. The magic system is replaced by a range of limited use extra weapons. These can be picked up everywhere, whereupon they are stored in one of six slots, which then can be activated whenever they are needed. Most are energy beams that go in different directions (these include Asfal’s standard attack from the PC Engine CD game), but they can also be used to restore health or temporarily wear the typical bikini armor, which serves as a protection from damage for several hits. 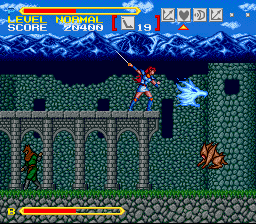 The game reuses most of the same sprites and many of the same background tiles as Valis IV, but they are used to create a remix of entirely different stages and challenges. The problem is, none of them are very good. The areas are long and boring, and contain many of those pointless straight corridors known from the early games. The few boss fights that are actually hard are so in a rather frustrating way, and having to juggle around the extra weapons is counter-intuitive. Rarely has the “Super” prefix in a SNES title been as inappropriate as it is here, but apparently “Mediocre Valis IV” didn’t strike the marketing team as an effective alternative. It’s not like anything in the game is offensively bad – it’s just kind of bland and boring, and very disappointing in comparison to the CD-ROM powered version.