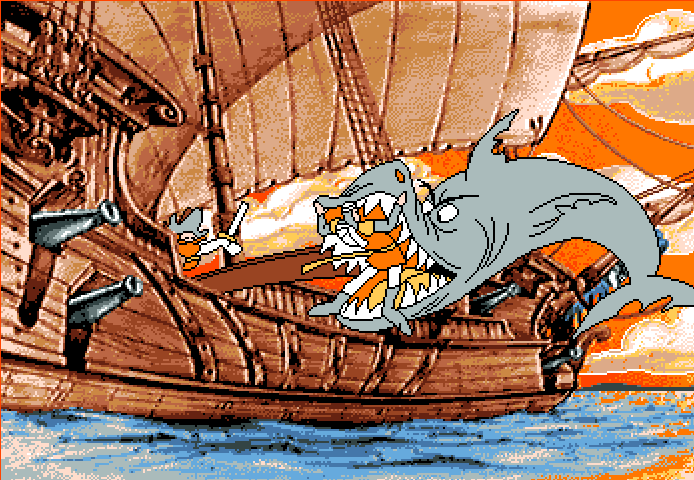 When Dragon’s Lair was ported to the Amiga, it was quite a technical achievement, since it was the first port of Dragon’s Lair to truly come close to replicating the original arcade version. It was far from perfect; it’s hard to cram a laserdisc’s worth of content onto six 3.5″ floppies, so there were a lot of missing scenes and such, but it was leaps and bounds ahead of everything that had come before. It’s quite obsolete now, with the wide availability of HD arcade-perfect ports, but when it was time to release a follow up, things got interesting. 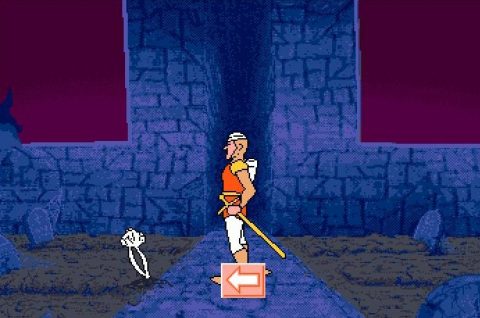 The version of Escape from Singe’s Castle for Amiga was completely different from the one for 8-bit computers. The story in this version is that a Shapeshifter (that Grim Reaper looking guy from the spinning socker bopper level) has kidnapped Daphne and taken her back to the castle, and Dirk must once again save her. Nothing new or interesting. It featured more screens from the arcade game that couldn’t be fit on the original port, due to limited disk space, but it also featured some exclusive content that hasn’t been seen before or since. 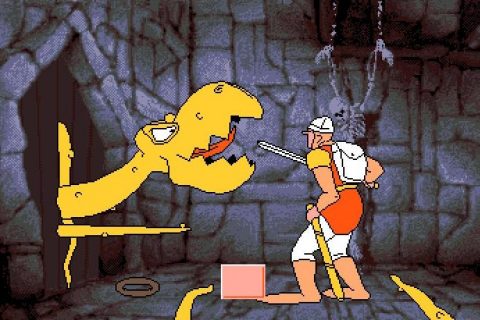 A few brand-new levels were created for this release, including a scene where a monster morphs out of a door knocker, a labyrinth/graveyard, and a new final battle with the shapeshifter. They’re interesting, but not anything special. The labyrinth is very annoying, as it’s just a maze with no hazards or dead ends to avoid, although the death scene when you fail to pick a direction, which just shows Dirk run into a wall and somehow die is slightly amusing. Also, some of the new animation, especially the ending where Dirk and Daphne kiss, looks quite lousy. Still, this version is worth a look for hardcore fans, or at least pulling up a YouTube video of it just to see the extra content. 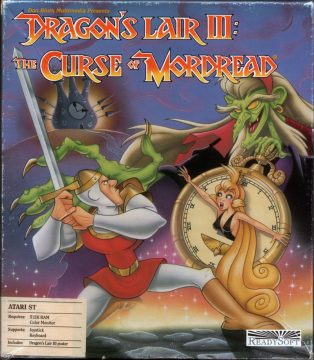 The second and final of the home computer version expansions for the Dragon’s Lair franchise, Curse of Mordread is a game that clearly had high ambitions, but again, is held back by the technology of the time not quite being able to deliver. On one hand, it has a bit of decent new content, plus levels from DL2 that were cut for space from that port, including heavily trimmed versions of the Wonderland and Beethoven levels. While they are still technically impressive, the severe editing hurts them a bit, with many of the most bizarre and gorgeous moments not there to be seen, likely due to technical limitations of the home computers of the time. 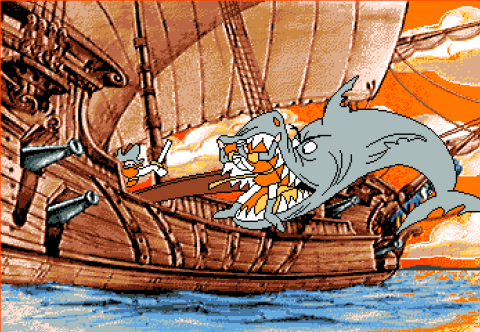 The plot is as stock as sequel plots come. Mordroc’s sister, Mordread, who is basically just Mordroc with a feminine body (they didn’t even change the voice!), is quite angry with Dirk for having dispatched her brother, and in revenge, shrinks Dirk and Daphne’s home, along with Daphne, and takes them hostage. Dirk, of course, gives chase in his Time Machine to stop Mordread and save his family and home.

Unfortunately, Dirk’s greatest foe is the massive amount of loading times. The game came on eight 3.5” floppies, and each disk has about 30 seconds of gameplay, and far more than that in loading. Every few seconds, the game freezes to load the next couple of seconds before pausing again for more loading. The Wonderland level alone takes up three disks, even after significant trimming! Worst of all, you start with three lives, with certain score thresholds awarding more, and get no continues. If you get a game over, it’s back to the beginning, which is very aggravating even on its own, but adding constant loading and disk swapping on top of having to play through the game again, makes it a slog. 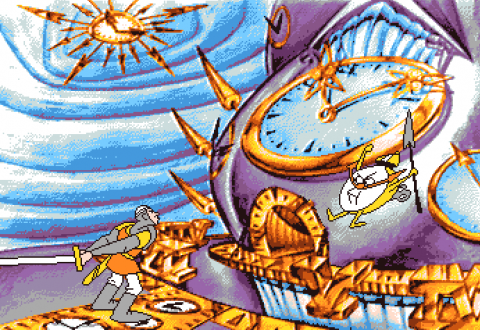 Which is really too bad, as the new content is competently done and a lot of it is quite enjoyable. The action is quick, but mostly intuitive, and there are some enjoyable new death scenes. They even went as far as to create their own version of the scrapped pirate ship scene from DL2, as well as a completely original final scene that has Dirk chase Mordread through a land populated by anthropomorphic clocks and ruled by Father Time. It is quite good, despite a rushed resolution, with creative imagery and some well-choreographed action. 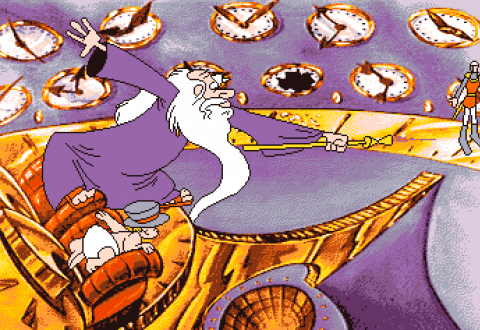 The unique original scenes almost make sitting through the constant loading times worth it. Almost.

Despite its constant loading and high difficulty, Curse of Mordread is a serviceable addition to the franchise, with enough competently made original content to justify a playthrough (at least, with savestates). The creativity shown in the new scenes, while not even close to Bluth’s original fever dream-like content, is serviceable, and for hardcore Dragon’s Lair aficionados, it is definitely worth a viewing.