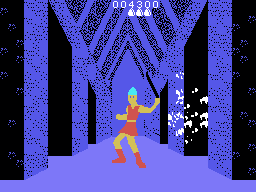 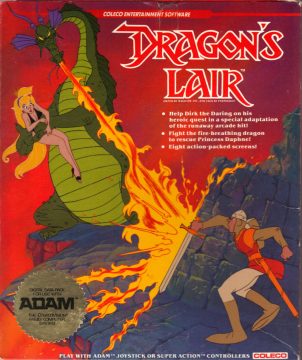 With the massive success of the original arcade game, it was inevitable that there would be ports to home computers and consoles. However, with the limited technology of home computers in the early 1980s, people expecting a straight, perfect port of Dragon’s Lair from the Laserdisc/arcade release to 5.25″ floppy disks, a cassette tape, or a game cartridge were bound to be disappointed, to put it mildly. However, the first home version of Dragon’s Lair, developed by Coleco for their ill-fated Adam Computer and later released for several other popular 8-bit home computers of the time by Software Projects, was surprisingly well done given the hardware, and is still playable if one is willing to overlook its limitations. Coleco spent $2 million to license the right to make a home version of Dragon’s Lair and were originally planning to make a straight port for a laserdisc game player add-on they were planning for the Colecovision. When this idea fell through, it was decided to make the home version more of an adaptation rather than a true port. 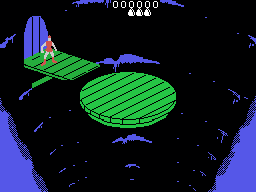 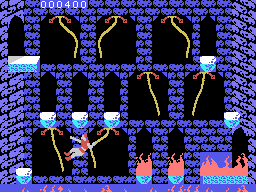 It’s easy to laugh at now, but Coleco’s adaptation is surprisingly faithful, playable, and impressive for the time it was released.

The Coleco port has two different gameplay styles. In some scenes, the player controls Dirk directly, maneuvering him through obstacles with the joystick and buttons much like a standard arcade game. Other levels feature a gameplay style closer to the arcade game, requiring the player to move in the right direction or use your sword at the right time. These scenes don’t use animation, but sprites on tiled backgrounds like most games of the time. Despite this limitation, the game actually looks quite detailed and colorful for the time.

There are eight different levels, all adapted from scenes in the arcade game: Falling Disk, Skull Hallway, Burning Ropes, Weapons Room, Giddy Goons, Tentacle Room, Checkerboard, and Dragon’s Lair. The interesting thing is that these levels are not exact translations, and Coleco added new features to familiar rooms from the arcade game. For example, in the Falling Disk screen, it is no longer a simple joystick push to get Dirk to jump to safety. During the fall, wind spirits now appear that try to blow Dirk off the falling platform. The Skull Hallway now features bats as another obstacle for Dirk to avoid, as well as the traditional hopping skulls, giant skeletal hands, and slime. During the final room, Dirk must avoid Singe the Dragon’s fiery breath by hiding behind large boulders strewn about the lair, which slowly melt away from the heat. If they are completely destroyed, they reveal score items. There are many such changes, greatly altering the experience so it doesn’t feel like just a retread of familiar territory. One complaint is that the animation when you die of Dirk turning into a skeleton, crumbling, and then reforming takes way too long in certain versions.

There were plans to port the game onto a cartridge for the Colecovision, but memory issues prevented this. However, a homebrew version was released by Team Pixelboy in late 2012 for the system which takes advantage of the added memory of the Super Game Module add-on by Opcode Games. The different versions have different graphics, minor features, and even slightly different solutions to the Arcade-style levels. Interestingly, some versions have a story scroll that seems to be based off the animated series, as it refers to characters exclusive to it.

For a few years, this was the best home version of the game, and it still holds up well today as long as you keep your expectations in reasonable check. 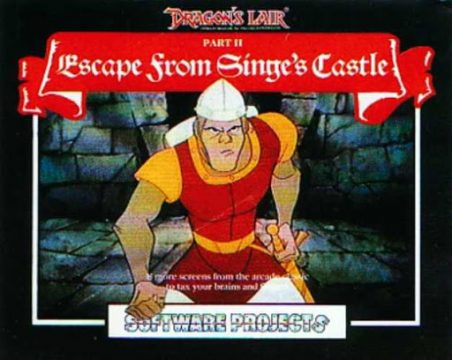 With the failure of the Adam Computer and the great video game crash of ’83, Coleco went into bankruptcy, but that didn’t stop Software Projects, who ported the Adam game to several other home computers of the time, from creating a sequel in the same style. It plays the same as Coleco’s version of Dragon’s Lair, but features seven new levels: The River Caves, Boulder Alley, Throne Room, Lizard King, Flying Horse, Doom Dungeon, Mystic Mosaic, and Mud Monsters. The story goes that after rescuing Daphne, Dirk has returned to the castle to gather treasure to more or less show off what an awesome knight he is, and that’s about it.

Unfortunately, there is one major issue. The level design is so insanely difficult compared to the first game that it comes across as mean-spirited. The first level, The River Caves, looks like and plays similarly to its arcade counterpart, except that the designers decided to make it more challenging by making the directions you must go random each time the level starts. For a game like Dragon’s Lair, which is based on split-second timing and memorization, this makes the level nigh-impossible, and this is only the first level. 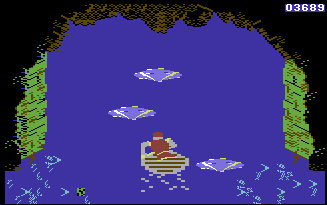 Without cheats, this first level might be all you ever see of the game.

Later levels add to the insanity. The Lizard King stage is a maze that you must make your way through to retrieve your sword and kill the Lizard King without getting killed by either him or giant rats, seemingly through trial and error. The Flying Horse stage has obstacles come at Dirk so fast that it’s nearly impossible to react, and some of the hazards make you move slower if hit, making it even harder. The Mystic Mosaic is the worst though, as you must move Dirk around a changing playfield without falling, which is designed so that you have to play the game over and over just so you can memorize the directions you must go. The levels designed like the arcade game, while better, also have some issues where some of the moves you’re supposed to make don’t really make logical sense or contradict the arcade version of the level.

It’s really too bad, as parts of the game’s presentation are superior to the original. The music is better, due to the work of composer Rob Hubbard, who created numerous excellent soundtracks for 80s computer games. The graphics are of decent quality once again. It’s a shame that the levels are so poorly designed. If they had been reworked to be more playable, it would be a worthy successor to Coleco’s enjoyable original port, but as is, it’s not worth the hassle.