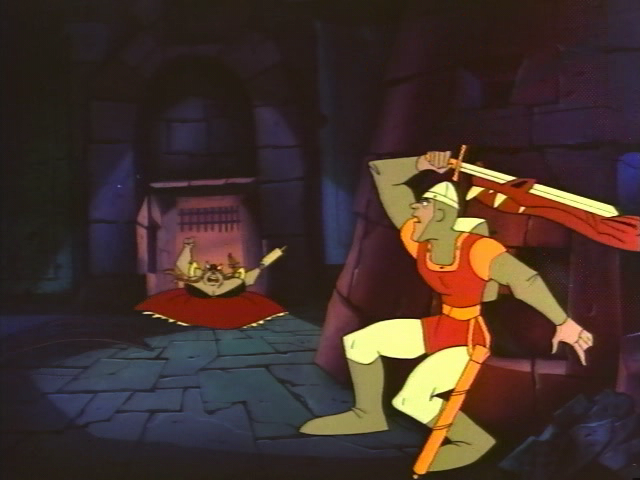 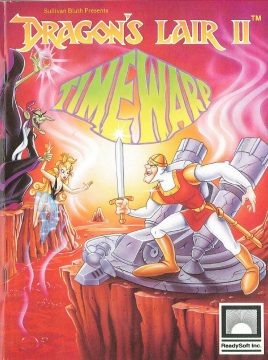 In the early 1990s, with the FMV game suddenly in vogue again thanks to the CD-ROM, Bluth and his team (Rick Dyer had since moved on to work on his own set of FMV titles) decided to return to work on Dragon’s Lair 2. The game would be much larger in scope than the original Dragon’s Lair, featuring a time-travel scenario that would take Dirk across history and myth to save Princess Daphne once again, this time from the evil wizard Mordroc, who apparently was the owner of the castle you explored in the first game, despite the fact that his name wasn’t even mentioned. Mordroc plans to marry Daphne with the Death Ring, which will turn her into an ugly monster much like himself. This kind of defeats the point of marrying Daphne in the first place (Side Note: Dirk and Daphne sure have a suspiciously large number of children, don’t they?), but regardless, Dirk must find a way to catch up with Mordroc as he travels across history before Mordroc puts his evil plan into action, or not only will Dirk find himself without his true love, but facing the wrath of his mother-in-law as well. It’s never properly explained why Mordroc is traveling across these different time periods that Dirk chases him in, although if he just teleported Daphne to his lair and wed her immediately, the game would be quite short, uneventful, and bland.

While the first game already had a tongue-in-cheek attitude, Dragon’s Lair 2 is even crazier than Space Ace, featuring some of the most insane looks at world history and myth that you’ll ever see. The first level follows Dirk as he is chased by his previously mentioned mother-in-law as she attempts to brain him with a rolling pin for failing to protect her daughter. Dirk is chased into Mordroc’s castle, where he finds a time machine carrying the soul of Mordroc’s brother in the lair of the dragon from the first game (was that thing always there!?) and begins his pursuit of Mordroc. That’s when the game really goes off the rails.

Each time period is unique and lavishly designed, with lots of rich colors, wacky characters, and bizarre events; perhaps a little too bizarre. It’s usually not so much the concept of the levels in this game, but the way they’re portrayed that will make you question if Bluth was at all sane when he created them. It’s one thing for Dirk to visit the Garden of Eden, and quite another for him to then be chased by an old-man angel trying to zap him out of existence as well as a disgustingly obese Eve who confuses him for Adam, and then end up causing the fall of man. Another level features a shrunken Dirk trying to avoid being eaten by Beethoven’s pet cat while the music master himself obliviously plays his fifth symphony on the piano which causes all of the above to fly into the sky before he rips back his clothes to reveal an outfit that even Elton John wouldn’t be caught dead in. Look at the screenshot above if you do not believe me! It all makes the level where Dirk visits Wonderland and gets chased by the Queen of Hearts and the Jabberwocky through a psychedelic landscape seem normal in comparison.

The game eventually culminates with Dirk finally cornering Mordroc in his lair, only for the evil wizard to put the ring on Daphne’s finger before he can stop him, causing Dirk to not only have to evade the now evil, transformed version of Daphne, but also find a way to defeat Mordroc and turn the princess back to her normal self. It’s an epic and intense scene, and quite a shock after the light-hearted insanity that comes before. Even after you defeat the evil wizard and save Daphne, there is still a whole scene to play through where Dirk and Daphne must escape from Mordroc’s crumbling lair and return home. It feels very superfluous, and just imagine making it to this scene in the arcade, losing your last life on a single mistake, and not being allowed to continue!

The game had some problems during production. Not only was an entire level scrapped that was to take place on a pirate ship (an incomplete version is viewable on some recent releases as a bonus feature), but the release version also suffered from some publisher meddling that made the game far more frustrating to play.

Besides being at least as difficult as Space Ace (it follows the same format as that game, with fewer, longer scenes played in linear order), it also has a huge problem when you get to the point where you’re supposed to fight Mordroc, likely only to be greeted by a message stating that you need to go back to the previous stages, play them through again, and this time collect the golden treasures you’ve missed. Before you can move on to the final stages of the game, you must have collected all the collectables that are scattered throughout the game that appear for a brief second at certain points! While some versions of the game are thankfully upfront about this necessity, it doesn’t make the requirement any less infuriating. Sometimes they are even difficult to spot, the butterfly in the Beethoven stage being especially infamous. This has no purpose in the game except to drag it out even longer and is extremely frustrating for a first-time player. It also doesn’t help that there are no alternate paths through levels like there were in Space Ace, meaning that once you’ve played through all the levels once, you’ve seen just about everything the game has to offer, making a forced second playthrough also quite boring.

It also doesn’t help that, with the game featuring the longest scenes yet, that the game does not have mid-level checkpoints, except inexplicably in the first level. On top of that, many of the levels have certain moves with strangely fussy timing required that doesn’t always match up with the flashing hints. Because of this, the game is infuriating to play because even if you know the correct moves (after hours of play), if you don’t time it just right, it won’t count, and you’ll die anyway. On the plus side, scene mirroring is now handled in a reasonable fashion, the game randomly choosing a version at the start of the scene and sticking with it unless you lose a life, with no random switching in the middle of the scene or being forced to replay sections in the other version.

At least, that’s how it is in the original release of the game. The original intent for the game was that if you were to collect all the treasures, you would unlock an alternate climax where Dirk is able to thwart Mordroc’s plan without having to survive Daphne’s transformation. In the final release, however, Leland, the distributor of the game, decided to cut the alternate ending and make collecting the treasures mandatory. Thankfully, some recent releases of DL2 have added a “Director’s Cut” mode that reinstates the deleted scene and rules for reaching it, as well as restoring the original intended behavior for collecting treasures, where the animation of which was supposed to integrate seamlessly into the main action of each scene. In the release version, after Dirk collects a treasure, the scene awkwardly jumps back slightly to force the player to make the other move that branches from the opportunity to grab it.

With all these problems, Dragon’s Lair II as it was originally released is the weakest entry in the so-called “Don Bluth trilogy” of laserdisc games, but even so, you should still at least watch the footage simply because it must be seen to be believed. It’s like watching a story someone tells while they’re tripping on drugs, and it is so ludicrous and bizarre that you’ll likely laugh a few times simply out of confusion and shock. It is worth the price of entry for that alone.