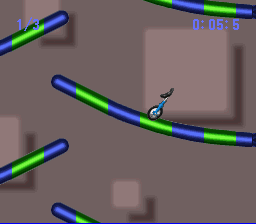 Unirally (also known as Uniracers in the US or its mysterious working title 1×1) is a British-developed game about sentient unicycles racing at very fast speeds through strange landscapes. It’s a pretty strange premise already, and made even stranger because the main focus of the game is performing stunts. Yes, unicycles racing and performing stunts to go faster. Unfortunately, such a fun and unique gem never reached the audience it deserved. 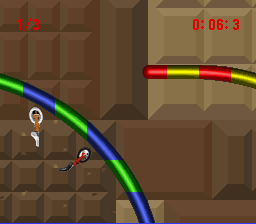 Unirally is rather different from your normal racing games involving cars, bikes, and go-karts. For starters, it’s a side-scroller. Most racing games put you behind the actual racer, making Unirally look and play more like a platformer. You also have a jump button, which can be used for stunts and acrobatics, adding in elements of platform games. Stunts are very important in Unirally. Your main stunts are rolls, flips, Zs, and twists. You do roll and flips by holding a shoulder button while in the air – your unicycle should start spinning. If you land correctly, you get an indicator on-screen of exactly what stunt you just performed. Pressing X in the air performs Zs. They usually leave you in a weird position, so you have to use the shoulder buttons to land right, as they can be very difficult to pull of on most normal jumps. Twists are the simplest tricks to do. They simply involve using the A button. You can also perform twists by pressing back and then forward in the air to change your unicycle’s facing direction.

Whenever you perform a stunt, you get a burst of speed. The more elaborate the stunt, the more speed you get. The game helps you out by telling you whenever you performed a stunt by giving them all silly names; some of them make sense, like “Head Banger”, while others are nonsensical such as “Dude”. The nonsense stunts have different names depending on which unicycle you chose to play as. You can also rename unicycles. If you rename a unicycle to SONIC, SEGA or, interestingly enough, SATAN, the game won’t allow it and claim it to be “Not Cool Enough”.

There are nine circuits in Unirally, each one having more elaborate tracks than the last. Each circuit has a total of five tracks on it: 2 sprints, 2 loops, and 1 stunt course, making for a total of 45 different tracks. Each track looks similar, save for the strange backgrounds. Also, every so often, a track will throw something crazy at you like filling a track with sludge that slows you down, putting in a short cut that may not be obvious at first, or a pitfall that drops you into an earlier part of the track. Also of note are the helix pieces. If you go onto them while jumping you will get propelled backwards, which is a lot like the pitfalls, but much more forgiving. Whenever one of these come up, the game warns you by changing the color of the track. Some of the circuits can be a little frustrating, but once you memorize them and figure out where and where not to perform stunts, you will have no problems beating it. 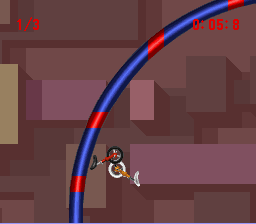 All the circuits have silly names that allude to their difficulty. They are Crawler, Shuffler, Walker, Hopper, Jumper, Bounder, Runner, Sprinter, and Hunter. Each one is represented by an animal, adding a bit of comedy. The animal representing Crawler is a snail, an animal known for moving very slowly, alluding to Crawler’s very easy difficulty. Once you complete a circuit, you get a medal. Getting medals unlocks new circuits. Bronze medal courses have you racing against Bronson, who rarely performs stunts and never takes shortcuts. Silver medal courses have you racing against Silvia, who is much smarter than Bronson and will possibly show you some new tricks if you’re still learning. Gold medal courses, however, have you racing against Goldwyn. There is no room for error against this guy and he will test your skills like they have never been tested before.

After clearing all circuits on all medals you get to race the final boss, Anti Uni, a black and red evil unicycle that throws lots of attacks at you in an attempt to slow you down during races. Anti Uni will do everything from making the screen wobble to disorient you, to slowing you down. His slow down attack is hilariously called “Hedgehog Speed”, another jab at Sonic The Hedgehog. He also has a squeaky high pitched laugh whenever he does an attack that gives him more personality than the other unicycles. He only appears on the Hunter circuit, which is full of tracks that would be difficult enough without Anti Uni. Beating Anti Uni is an accomplishment, mostly because he cheats so much.

Besides having great graphics and gameplay, Unirally also has some very catchy music. There are only around five tunes, but all of them are loud, over the top rock songs that perfectly fit the absurdity of unicycles racing each other. Colin Anderson, the man behind most music and effects at DMA Design, composed the soundtrack. He would later go on to make the music for the first two Grand Theft Auto games before leaving DMA Design.

Even though it has nothing to do with the gameplay, Unirally had a very funny instruction manual. The backstory uses lots of complicated math to try to justify sentient unicycles racing each other in strange landscapes. Also, no page is blank. Every last page has some kind of joke on it, including one that is “intentionally left blank”. Steve Hammond was the man behind this awesome manual. He did a lot of other work for DMA Design and Psygnosis, including making the graphics for Shadow of the Beast and writing the story for Hired Guns. 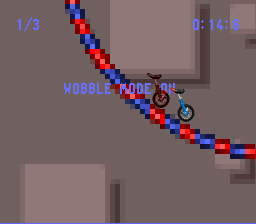 As already mentioned Unirally should have found a wide audience. It would have been an instant classic if it was not for its rarity. It received widespread critical success and many people who have played it can say that it’s one of the best and most original racing games on the Super Nintendo. It’s rarity can be explained by a lawsuit. DMA Designs, the guys behind Unirally, were sued by Pixar, the same animation company behind a lot of Disney’s 3D animated movies. Pixar made a short film called Red’s Dream, which was about a unicycle that bears a very strong resemblance to the unicycles in Unirally. As explained on Nintendo Life, in an interview with Unirally developer Mike Dailly: “We modelled the unicycle exactly, based on a real life unicycle. The problem with Pixar was that they seemed to think that any computer generated unicycle was owned by them. They took footage from Red’s Dream and compared it to Unirally and the unicycles were virtually the same; this isn’t a big surprise as there’s not a lot of ways you can bring life to a unicycle without looking like the one Pixar did. The judge – being the moron that he was – agreed. While it was a unicycle, and did look similar, I think he should have looked at the game as a whole. If he had, then he would have noticed that the game was a completely different environment, and the â€˜character’ of the unicycle just wasn’t the same.”

DMA pulled a lot of their games from the shelves and stopped production of more Unirally cartridges, limiting its run to a scant 300,000. Dailly added: “The deal was that Nintendo wouldn’t make any more carts so Unirally only sold the 300k initial run. It’s like someone making a game about a pen, and Biro claiming ownership over anything to do with pens. At the end of the day, we modelled a real unicycle and it came out the way it did.” This was an unfortunate turn of events, and is likely the reason we haven’t seen a re-release of Unirally on Virtual Console. DMA would later become Rockstar North and see a lot more controversies involving its Grand Theft Auto and Manhunt series.

Links:
Making of Unirally on Nintendo Life.
A site that offers some history on early DMA. Sadly, it only goes up to 1991.
Steve Hammond’s blog Nothing on Unirally, but a lot of musings on DMA and Pygnosis.