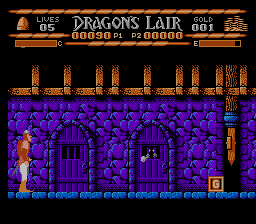 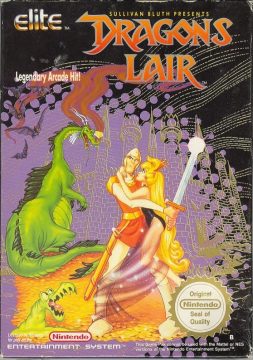 This version might be legendary, but it is for completely different reasons than the arcade game. The NES version of Dragon’s Lair, made by MotiveTime, attempts to be a side-scrolling action game, but is actually an astonishingly awful train-wreck that is so bad it’s almost funny (unless you bought it for full price when it came out, that is).

The main problem is that Dirk is large, slow and hard to control. There is a health bar, but it means nothing as almost all the enemies kill you in one hit anyway. Dirk is painfully slow to react to your control and even the simple act of ducking takes about a full second to fully occur. They were clearly trying to create a fluidity to the animation, like the original Prince of Persia, but the snail-like speed of it makes an already hard game near-impossible. Dirk’s only means of defense is throwing knives that travel in a slow, awkward, downward arc, making it a pain to actually land a hit. 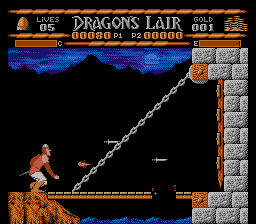 From the very first screen, the game is frustrating and cumbersome. You start on the castle drawbridge, and the first thing you are likely to do is slowly walk across. As you do so, part of the bridge starts to collapse under your feet, very likely causing you to fall in the moat and die. If that doesn’t get you, a monster breaks through the bridge in front of you and starts breathing fire. If you get hit by one of the fireballs, you die. If you manage to get past the monster, the gate closes, halting your progress. If you walk into the side of the gate, you inexplicably die.

What you are supposed to do is kill the monster, and the gate will reopen, allowing you through. However, the only place you can hit it from is the far left of the screen where you started, forcing you to backtrack across the bridge. Then, you must carefully throw your daggers to hit the beast, while slowly ducking underneath its fireballs. Get hit once, and you die, and have to do the whole process over again. Make it through the gate, and congratulations! You’ve made it to the second screen of the game, which is even more insanely difficult!

The second stage takes place in a long hallway that forces Dirk to dodge projectiles, kill enemies that suddenly pop in out of nowhere, and crawl under gates that open and close with perfect timing, which will kill Dirk if they much as touch his sword’s sheath. Every issue with the controls is highlighted to the point where it almost feels like the level was designed around them. It is absolutely infuriating, and if you run out of lives, there are no continues. Back to the beginning with you! Of course, few will have the patience to even get to that second stage. 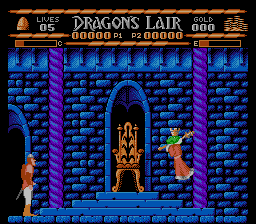 If there are any positives to be found, the characters and backgrounds are decently detailed, and animate well, even if it is in what feels like slow motion. The sound is inoffensive, with nothing standing out as either good or bad. The music isn’t terrible, and the sound effects do their job. Unfortunately, the presentation tends to disappear under the offensively terrible and frustrating gameplay. With its horribly unresponsive controls, unfair level design, and relentless difficulty, this version should be avoided like the plague.

The European and Japanese versions are slightly more polished than the North American release. The framerate is smoother, there are splash screens between most of the stages, there’s an extra death animation for when you get squished. There are some extra enemies in the Entrance Hall level, plus projectiles that need to be dodged in the elevator area. There’s also a 30 lives cheat code, making the game slightly easier, though no less frustrating.