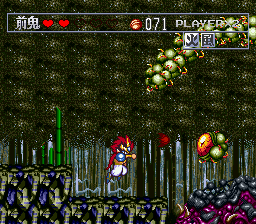 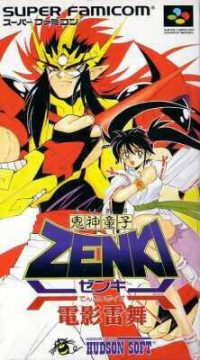 The third release, arriving on the SNES, is a really odd one. In fact it almost seems like two entirely different game projects that were forced together at the last moment, simply to get a saleable product out the door. Upon loading it up, Denei Live appears to be a one-on-one, first-person, turn-based fighting game – like the kind you’d see done using FMV footage and awkward button prompts. The tone is all gritty and serious, as you attack an old man and afterwards a giant green… insect thing? Button combinations will launch attacks in time to various undulating energy meters, which the AI will almost invariably dodge, and when they attack you in return a quick press of up or down will likewise allow you to avoid it. So the tedium goes on until you switch the machine off. 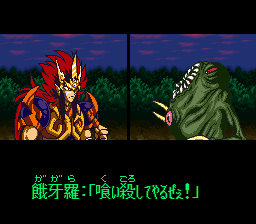 These sections are absolute crap – let’s be perfectly honest about this from the start. When done via grainy FMV there’s a kind of schlock amusement to be had, but with repeating sprites on the SNES it’s just silly. What you immediately want to do is grab these passwords (courtesy of ReyVGM of VGMuseum), and skip all of the first-person combat sections so as to jump straight into… the super-deformed ultra cute platforming stages?

This is why it seems to be two separate games stuck together. Right after the realistically drawn fight scenes (well, as realistic as green aliens can be), you’re suddenly dropped into a ridiculously easy platformer, controlling adorable-looking chibi versions of the main characters. It doesn’t make any sense. It’s actually pretty fun though, in a silly sort of way. You control Chiaki, traversing floating platforms and collecting little kanji symbols until you the reach the end, whereupon she calls up Zenki (in his child form) to battle a rather easy boss. After a couple of these it switches over to a few back-to-back first-person battles, and then back to platforming again. 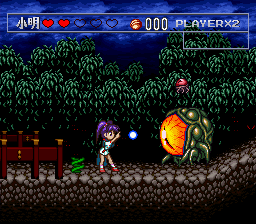 Quite how such disparate games came together is unknown, and apart from the main characters they differ in function, difficulty, visual quality and aesthetic style. The platforming stages feel like an unfinished game aimed at school kids, which was suddenly bolted on to something else so the coding didn’t go to waste. The first-person fighting meanwhile is awful and incomprehensible. While the platforming stages are fun though, they don’t quite warrant owning the cartridge. But hey, if you’re curious, you can use the passwords to skip the crap and blow through the rest of what’s here in an hour.