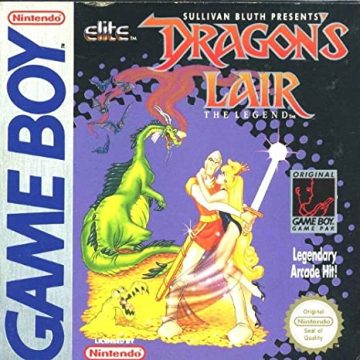 Made by the same company that created the NES version, Dragon’s Lair: The Legend is slightly better than the NES game, but not by much. The good news is that it attempts to tell a new story: The evil wizard Mordroc has attacked a caravan containing the mystical Life Stone, which of course gives the bearer limitless power and immortality, and, of course, kidnapped Princess Daphne. However, one of Daphne’s servants has split the Life Stone into numerous pieces and scattered them about the land. Now Dirk must collect all the pieces, stop Mordroc, and save Daphne once again.

The game is an exploration platformer, where you run and jump across different screens, collecting the pieces of the Life Stone and avoiding obstacles. There really isn’t much else to say, other than that it’s ridiculously hard for all the wrong reasons. You do not have a sword with which to kill enemies, the jumping is wonky, and the platforming is infuriating due to overuse of fast and/or erratically moving platforms placed over hazards. For example, when riding the mine cart through the Egyptian temple, you need to jump to grab Life Stone pieces and land back on the cart. If you miss and land on the track, you die. However, the track is often close to the top of the screen, and if you try to jump and hit the top, it will halt your momentum and send you falling to your death. On top of all that, you can die from falling too far. All of these problems and more make the game infuriating to play.

It also just doesn’t feel like a Dragon’s Lair game, probably because it originally wasn’t. It’s a reskin of a game called Roller Coaster for the ZX Spectrum. They simply changed the graphics to take place in a fantasy world instead of a theme park. Even then, it feels like a mishmash of different fantasy archetypes with no consistency, flow, or consideration of whether it fits the world of Dragon’s Lair. One screen might place Dirk in the middle of a village made from mushrooms straight out of The Smurfs, while a few screens over is the Egyptian Temple. On one screen, there are winged lizard-like beasts, a few screens away is a Rhinoceros. In a lot of ways, it still feels like a theme park, with its random assortment of different areas put together with zero continuity, and none of them feel anything like Dragon’s Lair.

The decision to simply reskin an old Spectrum game and try to pass it off as an entry in the Dragon’s Lair franchise is felt in every aspect of this title, from the wonky gameplay to the inconsistent art design. It all leads to a very uncanny feeling, even if you are not aware of the game’s history. It might be the worst game in the series, as not only is it zero fun to play, but it really is Dragon’s Lair in name only. 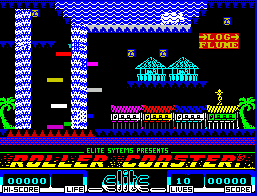 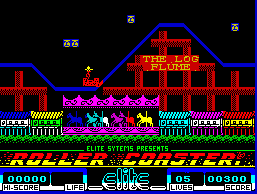