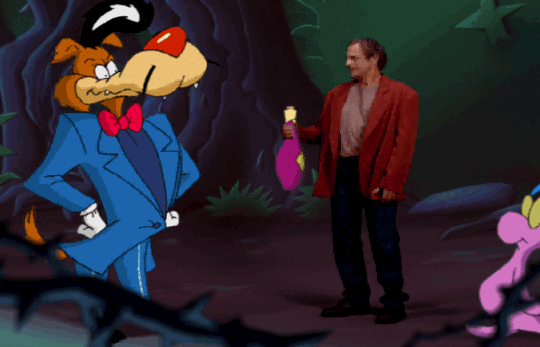 Drew Blanc is miserable. Despite being an immensely talented animator working on one of the most popular cartoons of its time, he’s overworked, unchallenged, unsatisfied. He wants nothing more than to turn his own personal creation, Flux Wildly, into a superstar, but instead he’s stuck working on The Fluffy Fluffy Bun Bun Show, a disgustingly adorable bit of saccharine that would make Hello Kitty puke. Drew’s fortune takes a wild turn when he falls asleep and is sucked into Cutopia, the world of his own design. The cartoon world is under attack by the neighboring country of Malevolands, led by the dark Count Nefarious. He has a device called the Malevolator, which can turn anything cute and cuddly into something dark and nightmarish. It’s up to Drew, accompanied by Flux, who is now taking on a life of his own, to stop the Count and bring peace back to the land. 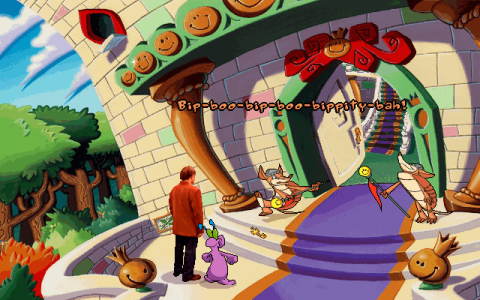 It’s very apparent that Burst Studios, the developer of Toonstruck, so very desperately wanted it to be an interactive version of Who Framed Roger Rabbit?, although conceptually it has more in common with Ralph Bakshi’s Cool World, a considerably more obscure (and substantially worse) film. Here, Christopher Lloyd plays Drew, who remains the only live action character in the world of Cutopia, while the rest of the world is rendered completely as a brightly colored hand drawn cartoon. There are numerous full motion video sequences as well, integrating Lloyd with the bizarre fantasy world. It’s never as convincing as Roger Rabbit, but it’s functional. 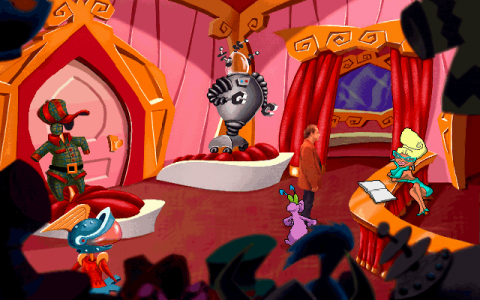 Burst Studios clearly had an affection for Chuck Jones-era Warner Bros, although other influences from the wide world of animation shine through. When the short, bearded, surly clerk puts on a tutu and launches a bowling ball down the alley with his butt, it’s hard not to be reminded of John Kricfalusi, and the overtly violent cat-and-dog duo, who run their own store and demonstrate their goods on each other, heavily channel Matt Groening’s Itchy and Scratchy, although that in turn was a satire of Tom and Jerry. The art style is varied yet unique, clearly recalling the golden era of animation while still maintaining its own sense of style. 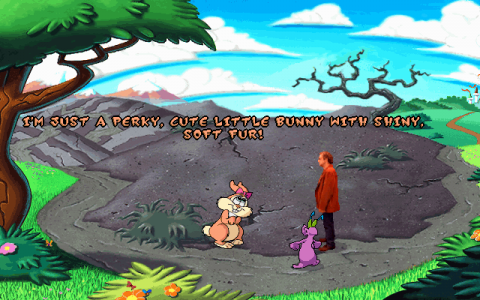 Toonstruck’s adventure is broken up into two acts. In the first, you need to collect roughly a dozen items to create an item called a Cutifier to counter the effects of the Malevolator. The rub is, you don’t technically know what the items are – you do know all of the ingredients for the Malevator, though, so you need to find items that are the “opposite”, or rather, items that accompany them in some way. The first one is a gimme as an example: Sugar goes with Spice. Some are quite obvious – the Arrow goes with a Bow – while a few others are a bit punnier. 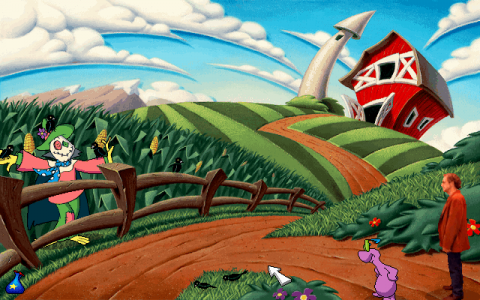 The game makes no bones about this being one gigantic, multi-tiered fetch quest, which might bring up nightmares of the first Discworld game, with its humongous world, expansive inventory, and nauseatingly difficult puzzles. Superficially Toonstruck shares the same structure, but after a bit of exploration, your goals eventually become apparent, even if it’s not entirely clear how to approach them. The journey initially begins in Cutopia, and quickly spreads into the neighboring kingdom of Zanydu, which is governed by insane wackos and Looney Tunes-style logic. Eventually you’re allowed into the depressingly dark Malevolands, which is a stark contrast to either of the other two worlds. The game world is quite expansive, although quick travelling, enabled by right clicking on any exit, makes navigation relatively painless. In true cartoon style, you also get a portable hole which can be used to transport over the map. 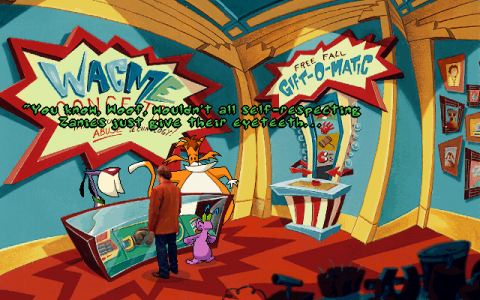 Once they’ve assembled the Cutifier, Drew and Flux are captured by Count Nefarious, with Drew breaking out of the cell and escaping on his own. The second half of the game is substantially darker, being that most of the wackier characters from the first half are missing, but it’s a traditional, structured experience, and delivers some of the better puzzles. The heightened reality and twisted logic makes some of the more difficult ones forgivable, especially since many rely on slapstick – in other words, devising the most fiendishly painful ways to punish your opponents. When distracting the guards in Nefarious’ castle, you need to flood the sink and turn down the heat, turning the bathroom into an impromptu skating rink, causing your would-be assailants to break out into a figure skating dance before harmlessly flying out the window. The other squadron is bested through a pile of Thanksgiving turkeys and creative use of dynamite. There are plenty of references to common animation tropes, like when you need to intentionally find some way to knock Drew out and pick up the resulting stars that swirl over his head. 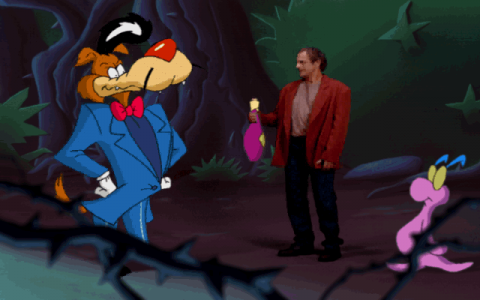 Toonstruck also has an astoundingly talented voice cast. Dan Castellaneta (Homer from The Simpsons) takes up the role as Flux, and Tim Curry does his best sinister evil guy act as Count Nefarious, while Fluffy Fluffy Bun Bun is voiced by Tress MacNeille, who channels her work as Dot from Animaniacs. Corey Burton, Jim Cummings, Rob Paulsen, Dom DeLuise, Jeff Bennett, April Winchell, David Ogden Stiers and Frank Welker, all among the best voice actors of the modern era, provide voices for the few dozen other characters, with Ben Stein joining Christopher Lloyd in the live action scenes as his corporate drone boss. Drew Blanc, other than being a somewhat stupid pun, is also a reference to Mel Blanc, the original voice of practically every major Looney Tunes character. The rest of the sound design is just as inspired. The music is a mixture of classical music, cheerfully piped into every scene, and the sound effects are all delightfully accurate. There’s a huge understanding of what made classic Looney Tunes so classic, and Toonstruck does a remarkable job of emulating them. 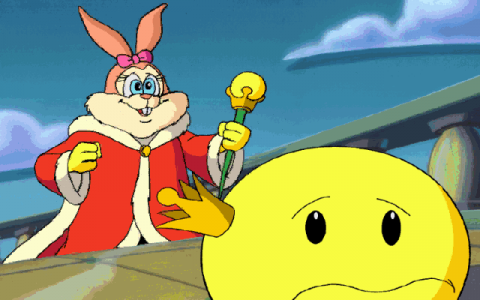 Artistically Toonstruck is right on the mark, but it’s really the inhabitants of the three worlds that make the journey as memorable as it is. You’ll meet a not-quite-menacing chap named B. B. Wolf, who may have well been drawn by Tex Avery and talks in an overtly suave manner despite speaking in malapropisms and wearing one extremely sad toupee. There’s a slightly flamboyant scarecrow – or should we say, Carecrow – with a finely tuned sense for fashion, and a diminutive Austrian bulldog with an obsession for pumping himself – and you – up. Fluffy Fluffy Bun Bun herself is a bipolar disaster, smiling and cooing one minute, bawling obsessively the next. On the Cutopian side, the castle is patrolled by an extremely cheery pair of armadillos, whose love of song and dance overshadows their competence as guards, while a legion of easily outwitted crocodiles serves as the army of the Malevolands. Throughout the later sections you’re tracked by a trio of Three Stooges-esque goons, whose abilities as tough guys are marred by infighting. Alas, the guard dog that talks like Ross Perot is a reference that hasn’t aged well. 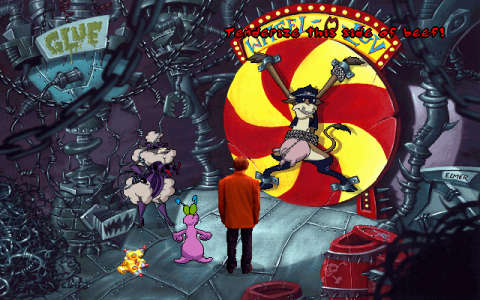 The one scene that Virgin’s PR folks always used to show that this game totally wasn’t for kids is the one where a genial group of barnyard animals is turned to the dark side by the Malevolator. Sure, the resident cow had a bit of a creepy affection for the milking machine, but that’s nothing compared to her “evil” state, where she’s pinned to the wall in full leather bondage gear, complete with pierced udders, and begs for punishment at the hands of a dominatrix sheep. It’s not as shocking as it thinks it is, but some of the dialogue is amusing. 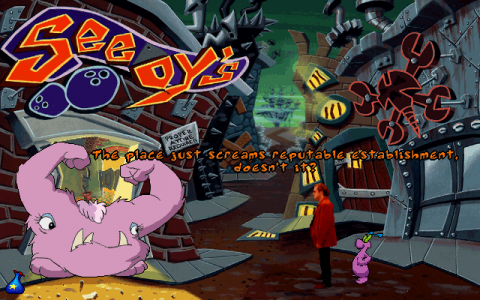 But for all of the clever characters and strange puzzles and outstanding voice acting, it’s pretty disappointing that most of the writing just isn’t terribly good. There’s an awful lot of dialogue, but rather than enhancing the mood, it brings the pace to a screeching halt. It’s never insufferable, it’s just rarely any funny, at least compared to a good LucasArts or Sierra game. It’s actually the second half of the game which shines in this regard, since there’s far less yammering. 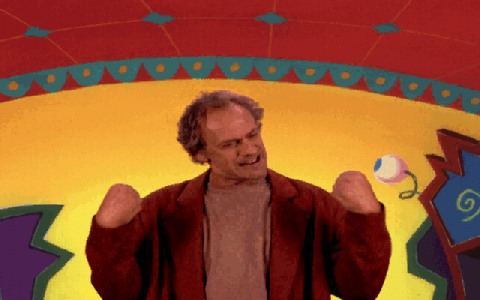 A good portion of the blame can be shifted on Drew himself, who, as a straight man, is more a pill than anything. Christopher Lloyd is an amazingly talented actor, with his roles in Taxi and Back to the Future being some of the most memorable in the past several decades, but he delivers his lines with a curious lack of enthusiasm. It’s also never entirely clear why Drew is so invested in saving Cutopia. Sure, he wants to escape, but he hates Fluffy Fluffy Bun Bun and all her friends. And for all of the dramatic weight that the introduction places behind Flux in being a truly amazing breakout character, like his creator, he’s also pretty boring. 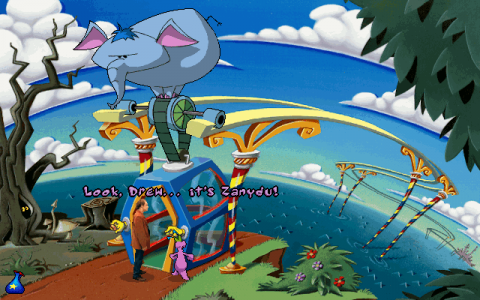 There’s also the annoying fact that the game just isn’t finished. Toonstruck was meant to encompass four CDs, but was cut in half fairly late in development. Despite creating many of the art assets, Virgin, the publisher, just figured that they’d put those to use in the sequel. Alas, Toonstruck flopped big time at retail, and any plans for a follow up were completely squashed. As such, the game ends on a cliffhanger, with several threads left dangling. There’s a recurring danger of Drew becoming a cartoon himself, which apparently means he’s trapped in the animation world forever, but other than flirting with the concept during a prolonged run-in with a psychotically dangerous clown, it’s never really explored. You never even get to really face Nefarious. One of the artists has put up some concept artwork, which shows Drew visiting an Old West style setting, and apparently Drew was meant to meet his idol Vincent Van Gogh. 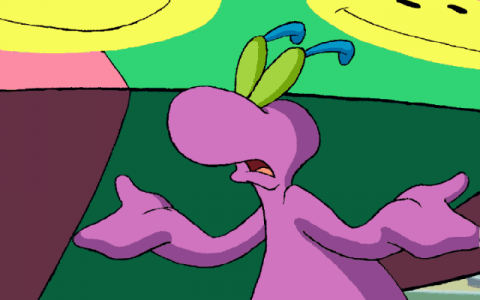 Even though Toonstruck can’t quite shake its feelings of incompleteness, it still functions, however crippled, as a standalone game. Animation fans are obviously going to be in heaven, and while it’s not quite an unquestionable classic, it’s still a gorgeous looking game with a lot of spirit and imagination, and one that deserved a better fate.