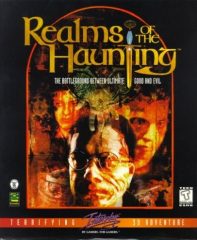 Gremlin Interactive was a fairly prolific British software developer established in 1984. They released a hefty roster of games, many of which are classics, before being assimilated into DMA Design by 1996. Gremlin had such notable releases as the arcade platformer Zool, the long-standing golf simulation Lotus, sci-fi strategy combat-scare-em-up Space Crusade, and achieving some early platforming excellence with Switchblade 2, Monty On The Run, and Wanted: Monty Mole. 1996 and 1997 saw Gremlin release two first-person 3D adventure games for IBM compatible PCs running DOS: Normality in 1996 and Realms of the Haunting in 1997. Both shared a common engine, although Realms of the Haunting uses an updated version of it. 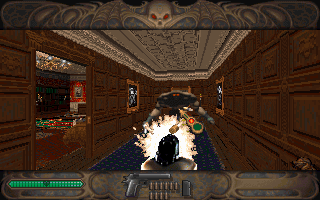 The locale is the deepest areas of not-so-sunny Cornwall, United Kingdom. The protagonist, Adam Randall, son of the pastor of a Cornish village, finds himself suddenly facing life without his father, and plagued by nightmares. Soon after the death, he receives a visit from the supposed-priest Elias Camber, bringing with him an unpleasant tale describing the gradual agitation and despair Adam’s father displayed in his letters to Elias. Adam’s father had discovered an old house, containing within it terrible secrets, but all further talk of this ceased once the letters to Elias had, also, ceased to arrive. The last thing Elias received, tellingly a week before Adam’s father perished, was a parcel addressed to Adam. Its contents – and further nightmares – prompted Adam to finally take action, and visit the house. Thus the game begins. So, it’s a haunted house story, so far, so original.

Adam (played quite adequately by David Tuomi) is joined by Rebecca Trevisard. Emma Powell convincingly plays Rebecca as an intelligent, conversant and friendly in-game partner who eventually helps Adam uncover the secrets of the game. The rest of the cast come across fairly well too, but it’s mostly Adam and Rebecca’s show.

Fairly blatant mid-90s CGI and green-screening make their presence felt immediately in the introduction, the first of a fairly copious amount of full-motion video, as was popular for the time. So far it’s all looking typically 1997 and somewhat low-rent, but it helps that Gremlin found some surprisingly competent actors, not outstanding, but certainly not bad. Odd though that Gremlin choose to employ an antagonist that looks like a cross between Robert Fripp and XTC-frontman Andy Partridge. Maybe they were fans? At any rate, there’s a ton of video, enough to fill a total of four CDs. 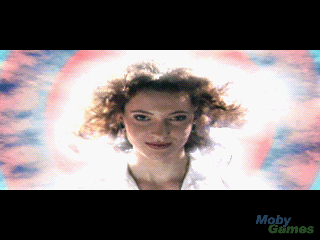 But once you reach in-game, it’s hard not to cringe, at least a little. Now, considering this was 1997, there were very few 3D adventures at the time, and both this and Normality wowed the critics. The closest was Access’ Tex Murphy games, like Under a Killing Moon and The Pandora Directive, which, while 3D, focused almost entirely on the adventuring aspects and didn’t feature much in the way of action. As we’ll see, Realms mixes both action and adventure in equal parts pretty well, and reviews reflected that at the time.

But there was another problem for many: Quake had happened. Gremlin didn’t stand much of a chance to fight the graphics war with their Doom-style 3D engine. You could look up and down, and the lighting seems independent of the map sectors, unlike Doom, and this adds a tremendous sense of immersion. But there is no support for resolutions above 640×480 (if you can get that to work), and even though 3DFX had only the year previously released their first Voodoo graphics card, Realm of the Haunting‘s engine is 100% software. And it really doesn’t help, because – as we’ll see – you need to keep your eyes peeled for items. Thankfully though, few critics complained about this (Edge being a notable exception), and as long as you can stick with the rather pixellated visuals, you’ll find as many did that Realms offers a tremendously compelling adventure.

The core gameplay is in the first-person, through Adam’s viewpoint. Movement is handled with the standard keyboard setup, but this is independent of the mouse cursor, which you can place anywhere. Interaction with the world is made via the mouse cursor. Two circles adorn it, one a green light denoting when you are able to click on something, and which will turn red when you can attack something. The other, larger, circle will only ever be blank OR show a small eye to denote something you can examine by right clicking. Those used to the mouselook functionality of modern first person shooters will be a bit confused, since the mouse controls the targeting cursor rather your character’s direction. It does lend a unique feeling to the game though.

This being an FPS/adventure hybrid, you will encounter many enemies in Realms of the Haunting. Naturally you receive weapons to fight with, and those are aimed and fired using the mouse independently of your viewpoint. This is initially compelling but made tremendously fiddly by the somewhat cranky inventory. There is no kind of quick-use shortcut keys for health potions or any items. There are a few “sections” in the inventory: your bag for “general stuff”, weapons, special items, notes & books, and “people”. In the “people” section you can review any of the characters or talk to Rebecca about any number of topics. Although there’s no automap, you can find maps written on parchment, which at least lets you get an idea of the level layout, if not necessarily your location.

You can equip up to five weapons at once, which can be accessed with the number keys, although since there are many more, you need to head into your inventory and assign them to the quick select spots. In addition to the standard selection of pistols and shotguns, each with limited ammo, there are various magical weapons with infinite usability, although they require a few seconds to recharge after each usage. It’s possible to examine each inventory item, and this brings up a window showing either a rotating view, or a zoomed view if it is a note or book. You can often get Adam to inspect and describe them. The subtitles are appreciated – the dialogue is well-recorded, but at times comes across a tad hissy, seeing how Gremlin likely used 8-bit samples to keep the file sizes down.

The combat isn’t as fluent as we’re used to these days, but it isn’t anything like as bad as most attempts at “adventure action”. The game will throw a number of traps at you, too, but as you can save where you like they never feel unfair. The combination of adventure and action is ultimately pretty cohesive, despite the few anachronisms that the game suffers. And while Realms of the Haunting doesn’t really sell itself as one, it should also please dungeon-crawler fans, since it mostly plays like one, only with more plot, puzzles and no leveling up, though you tend to receive better weapons as the game progresses.

A charming aspect of the game is the abundance of voice clips, even for small elements such as pictures adorning the walls, a curiously dusty window, or even a candle. Considering the age of the game, the house initially seems very well decorated, full of things to examine. Starting from the first room, turning 180 degrees and clicking on the now very closed and unopenable entrance doors after the game starts will cause Adam to remark “locked”. An ineffective light switch will make Adam reply with “doesn’t appear to be working”, and a coat stand will result in him saying “coat stand”. Of course there are more verbose descriptions for important hot-spots and items, but it’s pleasing that Gremlin took extra time to include less important objects in the game dialogue, and this adds to the atmosphere.

The later areas of the game tend to lack this, though, and come across looking rather barren. But this isn’t so bad in the face of the sometimes quirky, sometimes fantastical, sometimes truly outrageous level design. This is where Realms of the Haunting hits its stride, despite the lack of detail further into it – Gremlin were obviously well aware that their engine wasn’t that realistic, so they compromised by making the player run through a myriad of outlandish places. Dank dungeons with huge crevices and worryingly rickety bridges over which to cross them. Forests and glades, looking too flowery and too angular in design to feel realistic, giving them an appropriately surreal flavor. And later on, there are some truly hellish and twisted locations that are tremendously inspired. Standing on a huge clock face, fighting a boss, in a tower above an endless sea of blue nothingness is one particularly notable highlight. The whole game pulls off the creepy atmosphere very well, with many areas being explored in near darkness, and the low supply of ammo requires that you constantly rummage through boxes to find extra shells. Later on you get magical weapons that can recharge after a short period of time, although it doesn’t make things less hectic.

The puzzles, if one can call them that, are rarely illogical, so thankfully Realms succeeds on that score, too. Most of them simply involve rummaging through everything and finding the right items, or figuring out where to place said items. It is, of course, easy to get lost or miss items, requiring quite a bit of running around and backtracking. The American version of the game includes an “easy” adventure setting, which will automatically use the appropriate item (if you have it) while the “hard” setting will require that you root through your inventory and equip it first. Other puzzles are fairly easy, usually just involving mucking with candles or clock hands or the like.

According to the unofficial Realms of the Haunting website, there are a number of versions released: the European standard edition, the American standard edition, and an American “Director’s Cut” edition. The differences are minimal. Saved games will not work between editions, and the American edition adds four “arcade difficulty” settings affecting the amount of damage Adam will deal to enemies, in addition to the “adventure difficulty” setting. There are other small changes such as the engine version, and the additional Interplay logo not appearing in some editions. 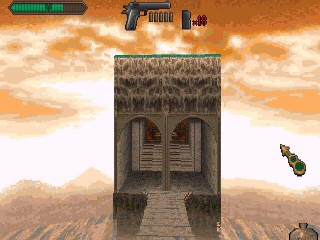 Realms of the Haunting runs perfectly well in the latest DOSBox. The engine may be tremendously low-resolution nowadays, but that doesn’t prevent it from being an inspired, enjoyable and compelling experience. Adventure game fans will appreciate it, horror fans will do, too. Those looking to try the combat will likely come back non-plussed, but it ultimately isn’t bad. Gremlin would go on to taking their 3D coding prowess to further heights the next year with their mighty Elite-clone Hardwar (featuring Autechre in the soundtrack, no less), but the same team would never touch action-adventure of the Realms of the Haunting variety again. A shame, because they had themselves one hell of a gaming recipe.

Realms of the Haunting can be purchased for a couple of dollars from Good Old Games.