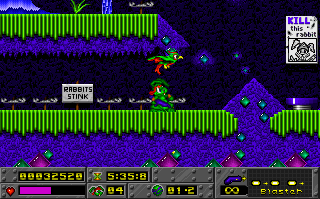 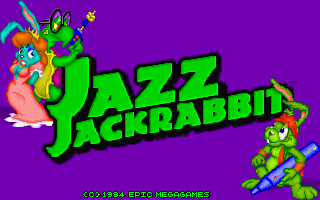 In early 1994, the Sonic the Hedehog series was a worldwide phenomenon, especially with its recently released third game. Even before then, pretty much every major game company was making their own Sonic rip-off for every console at the time, some with more success than others. But the one system that never had its own Sonic-style game was the PC. Sure, there were a lot of great side-scrollers at the time, such as Duke Nukem, but nothing that could match up to the speed of Sega’s series.

That was when Epic Megagames, who had previously created DOS hits like Epic Pinball and Jill of the Jungle, started work on the first attempt to make a high-speed platformer for the PC. Their attempt was Jazz Jackrabbit, and while it couldn’t really stand up to the games it was inspired by, it ended up becoming a pretty big hit on the PC, and for good reason. 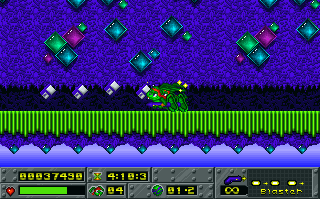 The evil turtle terrorist Devan Shell has kidnapped the princess of the planet Carrotus, and starts trying to conquer the rest of the galaxy, as well. It’s up to the rabbit mercenary Jazz Jackrabbit to travel the galaxy, destroy Devan’s forces, and eventually rescue the princess. Not really the most creative plot, but it sure beats an environmental message. The manual includes a small comic explaining the plot, where it admits that yes, it is completely and utterly ripping off Sonic the Hedgehog. At least they’re honest.

As far as animal mascots go, Jazz is much more on the “cute” side of the spectrum rather than the “annoying” side. While he’s not quite a mute, he never actually speaks in actual sentences, which automatically ratches him miles over Bubsy. He’s also suspiciously similar to forgotten Saturday morning cartoon character Bucky O’ Hare in design, although at least Jazz doesn’t have to cart around some random kid everywhere he goes.

The major difference between Sonic and Jazz is that while Jazz can’t roll himself into a pinball to defend himself, he doesn’t actually need to. Jazz carries with him a big gun referred to in the in-game instructions as the LFG-2000, (Wonder where they got that from) which he uses to blow through everything in his way. Unlike the other Sonic-esque game about a gunslinging anthropomorphic animal with a gun, however, Jazz is much less angsty about it. 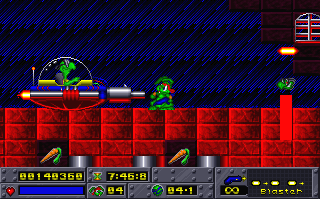 There are four different special weapons in the game, which Jazz can use as soon as he collects ammo for them. Aside from the standard blaster, Jazz can collect Launchers, projectiles that bounce across the ground, Toasters, fireballs about as big as Jazz himself, RF missiles which spread out in a V shape, and TNT, which basically works as a smart bomb.

Aside from a few specific situations, however, such as using Launchers to shoot an enemy below you (Jazz can’t aim down), there’s not much reason to use anything but the standard blaster. Most enemies go down in one shot no matter what weapon you use, and every weapon shares the same rate of fire, determined by how many rapid fire powerups you currently have on you. Ammo’s never really a concern, since you collect it by the hundreds, but in a slightly unfair design decision, you lose all the ammo you’re carrying when you die, along with your rapid fires.

Other power-ups include shields, which protect your health bar and circle around you. The fact that they come in monitors the size of your character would be blatant enough if it weren’t for the fact that there wasn’t a speed shoes power-up, and yes, the music does speed up while it’s active. You’ll also occasionally find a bird stuck in a cage, and freeing it will make it follow you around, shooting at your enemies until you take a hit. 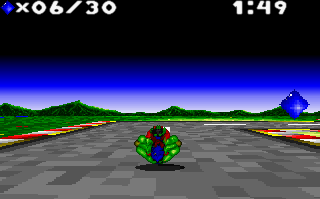 Some levels also have giant red gems, which, when collected, will send you to a bonus stage at the end of the act. These are Mode 7-style stages where Jazz has to run around a 3D environment and collect gems, while avoiding hazards like spinners and sticky goo. Clearing a bonus stage will earn you an extra life, although sadly there’s no sort of fancy super form in this game. The bonus stages aren’t all that fun, though, since they’re so simple, and the faux-3D effect was done better in games like Wacky Wheels. Still, the fact that the coders managed to pull it off is pretty impressive.

Unlike Sonic, Jazz actually has a health bar, and can only take three to five hits, depending on which of the four difficulty levels you’ve chosen. While health pickups aren’t terribly rare, you don’t have the same kind of safety net that Sonic’s rings gave you. This means that you have to play a lot less recklessly, which doesn’t really gel with a game that advertises itself as being so fast.

Jazz also doesn’t need any time to get to full speed, unlike Sonic, which can make it so not running into enemies and hazards is a little tougher than it should be. A lot of screen space is taken up by the status panel, which can make seeing anything below you a little tough, as well. It’s entirely possible to lose quite a few lives to cheap hits, which makes the fact that the game gives you unlimited continues and a quicksave feature from the pause menu quite handy. 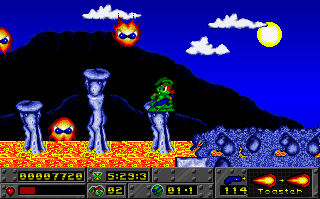 Since Jazz doesn’t have the same complex pinball physics as the series that inspired it, you won’t be seeing many loops and corkscrews. There’s actually a lot of precision platforming involved, a lot more than you’d expect from a Sonic-style game, and it never really feels like you get many opportunities where the game will let you enjoy the speed you’re given. The game may feel more like a “standard” platformer given a boost of speed, but the levels are still pretty well made. There are a lot of secrets, alternate routes, and out of the way areas to check through, including a few hidden stages. The game also does a good job of mixing things up by including new level gimmicks, like hoverboards to fly around on, magnets that suck Jazz in, and of course, water. Thankfully, Jazz had the foresight to bring a snorkel, so he handles it a lot better than Sonic does.

The game is split up into six episodes, each with three planets containing two stages each. At the end of each episode is a boss fight, and these range from incredibly easy to brutally unfair. One of these bosses is something the game calls Zoonik, which is basically Zool with Sonic’s spines and a fox tail. While this kind of ribbing usually ends up backfiring after the original game’s release, Jazz Jackrabbit is a much better game than Zool ever was. Each episode also has an animation at the end, which, while it doesn’t do much to advance what little plot there is, is still pretty cool.

Although it’s not quite as good looking as a game you’d find on a SNES or Genesis, Jazz is a pretty good looking game. It’s got a full 256-color pallete, which is quite a step up compared to some of the games companies like Apogee were releasing. Like Commander Keen from years before it, it was marketed as a computer game that could easily go up against the big guys on the consoles, a market space which was unusual for the IBM PC. (Speaking of Apogee, the disc version of Jazz had an “APOGEE” cheat code, which puts the game into sixteen colors and puts it in slow motion, calling it “Apology Mode”. Pretty harsh, which is probably why later versions removed it.) The sprites are all pretty big and have a good number of frames on them, although their size can make it hard to not end up running into enemies at times. 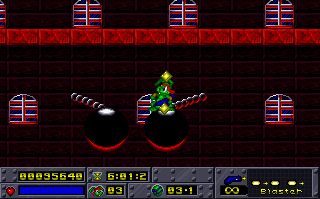 All the planets are pretty visually distinctive, too, and they even each have their own unique enemies and point items. The game starts off in your standard foresty area, typical fare for a Sonic clone, but as you move on, you’ll come across levels like medieval castles, abandoned temples, factories, junkyards, and the inside of a giant computer. The fact that the developers managed to restrain themselves enough from putting a casino or carnival level in is impressive, even if you’ll come across big tubes Jazz can travel through that look like they just came straight from Chemical Plant Zone.

The music, however, is definitely one of the highlights of the game. If you’re big on MOD music, with heavy use of samples, you’re going to love this game. There are a lot of great tracks in there, including the incredibly metal boss music. The sound effects are also fairly decent, and Jazz has a few lines, although they’re never really said enough to ever get annoying.

Jazz Jackrabbit was released on both disk and CD-ROM formats. The major difference is that the CD-ROM version has three new episodes with all-new planets. They also include a mode to practice the 3D bonus levels, as well as including the Holiday Hare 1994 episode. Unfortunately, there’s pretty much no way to get the game at this point besides eBay or abandonware, and with Epic’s current dudebro mindset, it’s unlikely the game will ever see a rerelease.

Jazz Jackrabbit may not quite stand up to the Sonic games, but it’s a step above typical mascot platformers, and it’s still a great game for what it is. The only real issue is a serious amount of cheap hits and really rough boss fights, but other than that, it’s a smooth, well-made platformer. While Jazz couldn’t possibly hope to stand up against Sega’s game, it was a pretty big hit on the PC, and helped Epic to move onto bigger things.

Along with a demo containing the game’s first three planets, Epic put out a special Christmas version of the game on BBSes that was free to download and play. The levels are all new, although the enemies were reused from the full version of the game. There’s also some new music, if you’ve ever wanted to hear what “Silent Night, Holy Night” sounded like in MOD format. Overall, it’s a pretty nice set of levels if you’re in the mood for something Christmas-y. This episode was included on the CD version of the game.

A year after the release of the original game, Epic released a new version of Holiday Hare for the new year. This time around, it’s a full episode, with two brand new planets each with their own look and enemies to fight. The first planet is a snow level with lots of giant pieces of candy scattered across the stage, and other is a toyland made out of Legos. Keep an eye out for a doll of a red rabbit in this stage, because he’s going to be important later on.

The fact that Epic bothered making new enemies this time around means that this episode is a lot more interesting than the previous Holiday Hare, so it’s worth looking at. There’s some new music, too, including a rap version of “Little Drummer Boy”. This episode isn’t included on the CD version, but it’s trivially simple to find on any site with DOS games for download.