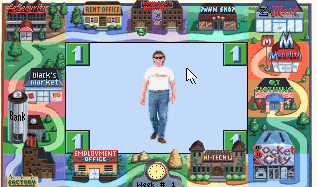 Life simulator games may not be the most popular genre when you compare to first person shooters or fighting games, but they’ve been around since the days of the Commodore 64, with the release of Activision’s Little Computer People, a game where you mostly sat and watched an animated person run around your monitor doing random things. It is a concept that would be revived and milked for every penny it was worth with The Sims and its uncountable number of expansions, sequels, and spin-offs. One game everybody tends to forget when it comes to actually simulating a life, though, is Sierra’s Jones in the Fast Lane. Sierra tended to experiment a lot when they weren’t making adventure games, including licensing Japanese PC games or making sports games. Jones in the Fast Lane is probably one of their most unusual games, however, because it takes the idea of simulating a life, that is, your own, and putting it into the form of a board game. Basically, it’s what you get when you cross the old board game Life with Sierra’s own perfected brand of unending brutality.

From the start, you have the choice of playing the game with from one to four human players. You’re perfectly welcome to play the game entirely by yourself, and while it’s not the most exciting way to play, it does give you a way to get a hold on how the game works. Each player also gets to select from one of four dorky looking digitized sprites to represent themselves. You’ve got a guy with a, to be blunt, porn ‘stache, two middle aged women, and a guy who looks like the distilled essence of the ’80s. If you plan to play this with other people, be prepared to get into fistfights over who gets to be ’80s Guy. Each player also gets four meters they can set to decide how much “Wealth”, “Happiness”, “Education”, and “Career” they need to win the game. You can set these higher and lower to change the length of the game, and the other players can set them higher and lower to give themselves an edge or a handicap. Once you’re done with that, you can choose to play with Jones, a cartoony AI opponent, and his level of AI. Actually playing against him is best avoided, as he tends to be able to play the game much better than you possibly can. 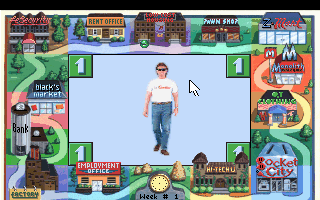 The board itself is a map of the city the game takes place in, with various locations you can visit to take care of your various needs. Each of your turns represents one “week” for you, and the time you have to spend for each week is shown by the clock at the bottom of the screen. Doing nearly anything will take some time from you, from moving across the board do performing actions at one of the locations you can visit. Once you run out of time, your turn ends and the game moves on to the next player. The challenge, basically, is to manage your time as well as you can so you can take care of your basic needs as well as actually do the stuff you need to do to actually win. There’s also ways to actually lose time at the start of each week, by forgetting to eat. You can get food at the local Monolith Burger (It’s a Sierra game, there’s gotta be a Space Quest reference in there somewhere), but oddly enough, the different food items you can get don’t seem to have any difference at all between them. The game couldn’t care less if you buy a week’s worth of French fries or a week’s worth of cheeseburgers, the cheeseburgers will just cost you more.

Speaking of eating, here’s the main issue with Jones in the Fast Lane and its universe: The economy, for lack of a better is term, is FUBAR. This is an economy where a week’s worth of soda can cost you as much as $77, while enrolling for college will only cost you about half that. The first thing you have to do when you start a game is get a job at the employment agency, but the problem is the only job the game will more than likely let you have will be a fry cook at the Monolith Burger. You can try for something a little higher up, sure, but the game will just tell you that there aren’t any openings, or that you don’t have the experience or education, and that’ll drain even more time from you. If you want the education, you’ll have to enroll for one of the classes at the university. Each class you enroll for has to be “studied” ten times to get the degree for it, and with each degree, better jobs open up for you. At least, theoretically. All the degrees in the world won’t help if you the game decides it doesn’t have any openings for you. The economy’s also entirely random, which means that prices can fluctuate wildly in either direction as the game goes on.

If all you had to worry about were the other players, that’d be fine. But you’re always constantly under pressure to get as much money as possible, because every four weeks you have to pay $325 in rent, which, when you’re starting out, is an insane amount of money. You can ask the rent office to give you more time if you can’t pay up right away, but this won’t always work, and even if it does, you’re only making your debt issue worse. If that wasn’t enough, every eight weeks the game will tell you that you have to buy clothes, which means you’ll have to go to the clothing store and buy a new outfit. Higher-end jobs need better outfits, which cost more money. If you don’t buy a new outfit in time, your clothes will literally rot off of your body, leaving your poor, abused avatar naked. And no, before you ask, you can’t see anything. All the characters cover themselves up somehow, like the ’80s guy using a barrel. You even lose money when you don’t do anything, because at the start of every turn, the game will describe what your avatar did with their weekend. This can include things like staying at home pitching horseshoes, which somehow ends up costing you 82 dollars. Other times, the game will randomly make you pay a hospital bill for no real reason and take even more of your money.

The goal of the game is to reach each of your four point goals before the other players do. The game doesn’t tell you how many points you have in each of your goals, or when you’re close to reaching them, so when somebody wins, the game just kind of ends up coming to a screeching halt. You get points in your goals by getting money, advancing in your career, getting degrees, and buying worthless crap for you and your apartment. Actually, some of the stuff you can buy does have a use. The refrigerator will actually let you store food you buy at the grocery store so you don’t have to pay each week to eat. Unfortunately, the game won’t actually tell you this, so the only way to find this out is to have enough money to actually buy one. There’s other stuff you can buy, as well. Concert tickets and fancy televisions will boost your happiness, and you can pay to move into a fancier apartment. Not that you’ll ever have the money to afford any of it, of course.

For all the crap the game puts you through, though, there seems to be no actual way to lose. If you run out of money and end up in serious debt, one of your character’s relatives will send you some cash and tell you to quit being a deadbeat. Basically, it’s less of a board game and more of a living hell, as no matter how much you try, the pain of trying to survive just won’t end, and any and all attempts to improve your futile situation will only end in crushing failure. Given the real world’s economy in recent times, any serious thought put into the game and its world are more than likely going to end up depressing you. Truly, you are the 99 percent.

The biggest problem with the game is that so much of it is left to chance. Not only do you basically hemorrhage a random amount of money at the start of each of your turn (how do you lose 82 DOLLARS staying home and playing horseshoes!?), you may also have a random chance of being forced to pay a doctor bill and losing even more money. There are also random events that happen periodically throughout the game, almost all of them bad. The economy can randomly fail at any time, making you lose your job and hiking up the prices of Monolith’s Burger’s life-sustaining French fries even higher. Besides that, there’s also the mugger that likes to hang around the bank and grocery store. If you happen to meet up with him, he’ll steal all the money you haven’t stored in the bank. There’s no warning that this will happen, or any way to avoid it when it does. Oh, and don’t expect your money to be 100 percent safe in the bank, either.

Most of the art of the game has a cartoony, painted look to it, much like an actual board game. Your character is a digitized sprite that animates when you move around the board, while the other characters you meet at the various locations are digitized portraits with a few frames of animation. One saving grace of the game is that every character has a lot of dialogue, and a lot of it is actually pretty funny. The guy at the clothing store says things like “Welcome to QT Clothing. The only place in the world where you can buy just one pant!”, while the cashier at the Monolith Burger will inform you after buying food that “You can save 45 minutes by flushing that right now.” Delightful.

If you have the CD version of the game, all the lines are actually voice acted by various Sierra staff, and although none of the acting’s amazing, none of it is really awful, either. Considering that the game’s about real life, anyway, it’d be hard to mess up acting for it. The music’s nice, too, especially when played over the Roland MT-32. The main theme when you’re moving through the board sounds rather frantic and panic-inducing, which goes pretty well with the general pace of the game. It also sounds suspiciously like the old song Powerhouse.

Overall, Jones in the Fast Lane is a sad, frustrating little game that doesn’t seem to want to be played. Sure, it’s a funny game, at times, but other times, it just puts so much effort into trying to destroy your little virtual life that it’s just not worth the effort. For the most part, the game was quietly forgotten after its release, and it was never ported to any other systems besides the PC. And honestly, that’s not really a bad thing at all.