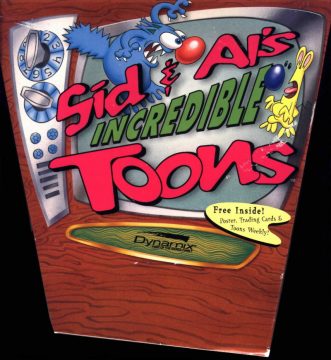 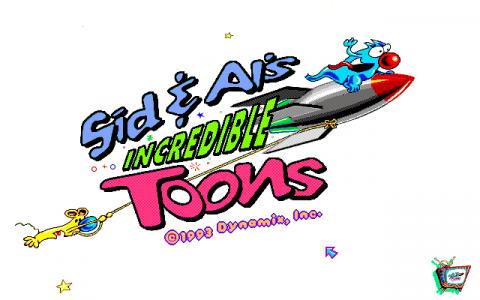 After the success of the original game, one would assume that its creators would go on to make a sequel, doing more of what the original did in typical sequel fashion. While that certainly came to pass, there would be one peculiar curveball on the way there. While Sid & Al’s Incredible Toons carries the same basic gameplay as its predecessor, its whole style goes another direction entirely. It’s a little less Rube Goldberg, and a little more Tex Avery and John Kricfalusi. The result, while certainly different, has its ups and downs.

There’s a whole lot of new parts to make use of, most of leave the realm of “vaguely plausible” and plunge straight into wackyland without a second glance. Two of the most important, given they’re in the title and all, are Sid, a little yellow mouse, and Al, the fat blue cat. Pretty much every puzzle involves doing something with them, whether it’s dropping something big and heavy on one of them, leading one of them to food, or saving them from having cartoon violence inflicted upon them. The pair have specific interactions with a lot of the new parts, and learning how those work is key to solving a lot of the new puzzles you’ll find. 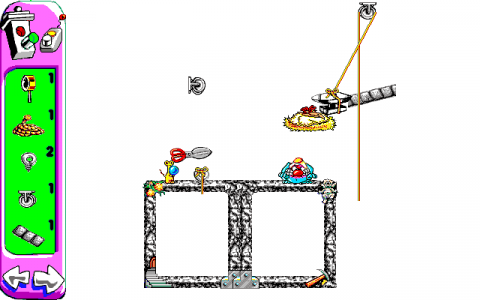 Dropping something on the chicken will make it lay an egg. Al hates it when eggs fall on him.

Take the interaction between Sid & Al themselves – if they’re too close, Sid will taunt Al, which will make the cat attempt to chase down and pounce upon Sid regardless of what’s in their path. If Al manages to catch Sid, he’ll shake him around, wad him up into a ball, and swallow him in one gulp – somewhat brutal, honestly. Some puzzles rely on this outcome, which means knowing trying to guess how the pair will move across the various terrains they’ll end up crossing the chase. There’s also a ton of other items that they have their own interactions with to keep in mind – Al will move towards fish in his line of sight, while Sid will ignore them, a falling anvil will remove Al from the puzzle, but not Sid, and a lot of other things to keep track of. And that’s not even counting the other part interactions, like an egg that a little man on a conveyor will eat so he’ll start powering it.

There’s a whole lot of new parts to make use of, many of which are brand new to this title in particular. You’ll find plenty of classic cartoon staples – anvils and pianos to drop onto things, or bubble gum that sends Sid & Al soaring upwards once they blow a bubble.

The problem is that while the original TIM made some kind of sense if you didn’t think about it too hard, about everything in Incredible Toons runs more or less on cartoon logic. This makes everything just a little more unintuitive, especially when you forget one particular interaction that can happen between two parts. It certainly lacks the general feeling of how a Rube Goldberg machine actually worked. Try comparing the way a puzzle was described in the previous game to another puzzle you’d encounter in this game.

Sid the mouse, lured by a piece of cheese on a gap ahead of him, pushes a baseball with a face, which lands on an ant that cranks a conveyor belt with a boulder onto it. The boulder lands on some kind of frog man in control of a catapult, who launches the boulder it’s holding onto a pair of scissors, which cut a rope holding a balloon in place. The balloon nudges a seesaw, which tugs a rope tied to a trap door with a beach ball on top of it. The ball rolls down an incline onto Eunice the elephant, who responds by blowing air out of her trunk. This pushes Al the cat into the pin placed behind him.

Doesn’t really come off quite as smoothly, does it? 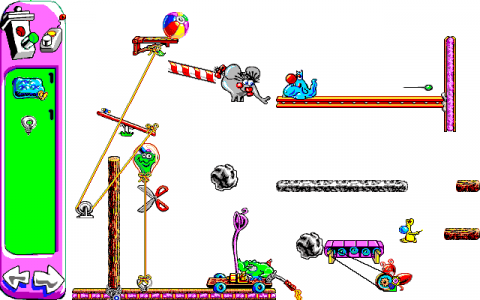 There’s also the fact that the animations take far longer to play out than Incredible Machine, which makes trying to trial and error your way through a puzzle take even longer. In one puzzle, you have to lead Sid towards a piece of cheese, where he takes about three seconds to eat it. He then stops to taunt Al before running away, which takes a couple of seconds on its own. He then has to climb a couple of ladders, which takes him about seven seconds. He then has to cross a see-saw with a rope you’ve hopefully tied in the correct way.

As you can imagine, this adds up.

Not all the puzzles are quite this lengthy, but for the ones that are, this quickly adds up. Since so many of the puzzles are based on trial and error, you’ll likely have to see these animations several times. True, they’re certainly amusing enough the first few times, but after that, they just begin to make everything drag. There’s certainly no way to fast forward the animation, either, which would have made the whole thing into a non issue. It all feels somewhat indulgent.

The puzzles are now split into four categories – basically tutorials, then easy, medium, and difficult puzzles, given appropriately wacky names. In all the categories except the tutorial puzzles, you’re free to select from a certain set of the puzzles, with some being locked until you finish the set. Some puzzles are locked extra hard, and can only be accessed by discovering a password you’ll only get a hint for by clearing every locked puzzles, as well. (Looking it up is an option, of course.) It makes for a somewhat smoother difficulty curve, although if you don’t really get how the various pieces go together, it might not make a massive difference. 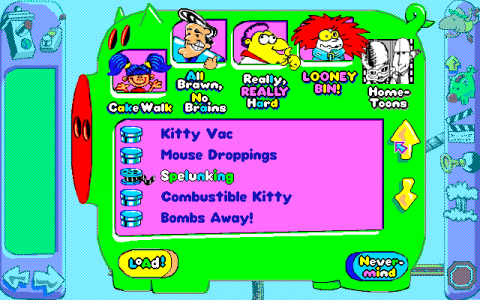 The sandbox mode has also been enhanced a little bit. You can now decide which parts are available for use when a player loads a puzzle file, which adds a lot more of an actual game element to it. Unfortunately, while you can write in a goal a player is ostensibly supposed to solve, the game has no way to actually determine when that goal has the reach. As the manual explains, you and your potential puzzle player will just have to rely on the honor system. Still, it makes for a good way to figure out what items go together, since it isn’t always obvious in play. 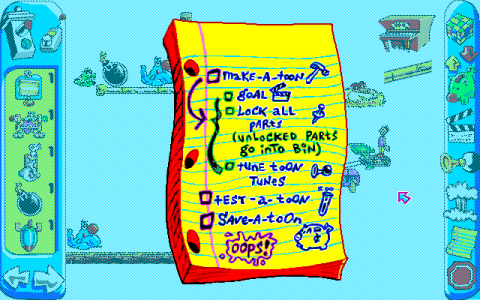 Just then, the interface showed up to block what was assuredly the funniest custom puzzle of all time.

The graphics obviously have a much more cartoony style to them, with more colorful, expressive sprites for even the most mundane of objects. Nowhere is this more evident than the user interface – almost nothing you’ll interact with inside or outside of the playing field isn’t completely garish or overdesigned, and it’s fantastic. The sound effects are similarly what you’d expect from the cartoon styling, and are functional enough. The music draws from a wide variety of styles – you’ll find classical style stuff, public domain tracks, a song that sounds concerningly similar to the Merry Melodies theme, and a song known only as “tmt_devo.mid”. The title is accurate. 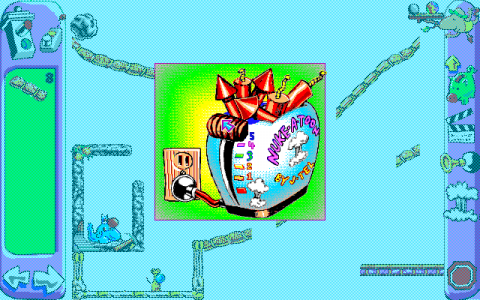 They could just had it so the screen cleared when you clicked the button. None of this was necessary, but they did it.

In the end, Sid & Al’s Incredible Toons does make for an interesting experiment and something very different from previous games. Unfortunately, what makes it different also makes it lack that intuitiveness of the original game. Most people can come to grips with how a Rude Goldberg machine functions, but trying to understand cartoon logic without already knowing what the parts do beforehand is another matter. It’s a worthy idea for a puzzle game, but one could see why they never came back to this particular concept. 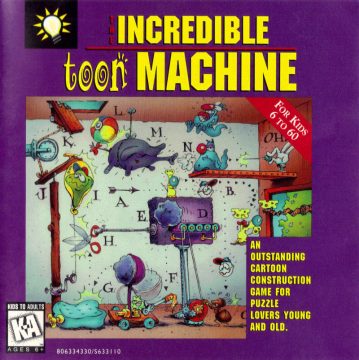 A year after the release of the original game, it would see a somewhat enhanced port for then-modern Windows 3.1 and Macintosh PCs. “Somewhat” is the key word, with the biggest feature being a set of new two player puzzles. Two players take turns placing pieces onto the field, and the first one to finish a specific goal first is the winner. A neat idea, although it’s unknown how much playtime you’d get out of it. There’s also a CD soundtrack and an FMV intro, which attempts to give the game a plot – after destroying their house and wreaking havoc, Sid & Al are sentenced by a judge to work in the “Toon Factory”. The puzzles also now come with narration from Sid & Al, voiced by none other than cartoon alumni Rob Paulsen and Jim Cummings themselves, with each narration ending with some goofy animation.

A Sega CD version was in development, but was never released in any form. 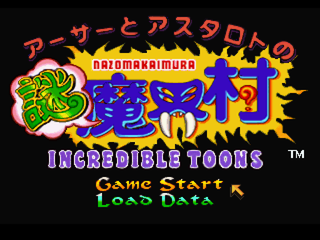 While the original Incredible Machine made a few appearances in Japan on its release, it took Incredible Toons a little longer to get there. While the original game went through mostly unscathed, the same can’t be said for this one. While the puzzles and general gameplay are the same, the entire game has been rethemed into a Ghosts N’ Goblins spinoff. Arthur himself takes the place of Sid the mouse, and he scrambles for the statue point pickups the same way Sid would go for cheese. Taking the place of Al the cat is the villain of Ghosts N’ Goblins, the demon king Astaroth, who will thrash Arthur just as easily as he would in the game he came from. 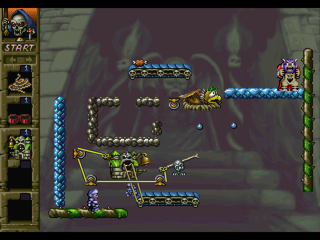 In terms of gameplay, it’s just about the same as its original version, aside from the puzzle objectives being in Japanese. The two player mode is also missing entirely, if you consider that a major loss. Aside from that, the remixes of music throughout the GnG series are nice, and it’s interesting to see what got adapted into what. Otherwise, it’s not much more than a novelty for fans of both series.