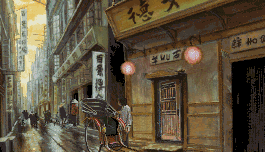 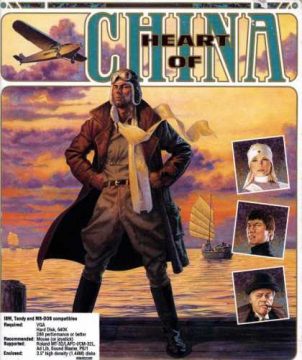 Heart of China, sandwiched between Rise of the Dragon and The Adventures of Willy Beamish, is Dynamix’s most obscure title. Inspired by the globetrotting adventures of Indiana Jones, the game stars former Great War ace pilot “Lucky” Jake Masters. Lucky’s out of work and mostly broke, with nothing left to his name but his wits and his plane. He’s a stereotypically arrogant American, often approaching situations in a rather brutish if somewhat humorous manner, and it’s easy to envision his lines read in a deadpan manner by Harrison Ford. Nonetheless, he’s hired by the wealthy businessman E. A. Lomax to rescue his daughter Kate, who’s been kidnapped by a Chinese warlord. The basic plot is suspiciously similar to Tom Selleck’s lesser known 1983 adventure flick High Road to China. 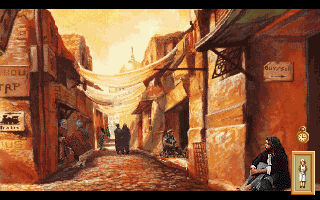 As the game begins, you arrive on the Chinese mainland to follow some leads. To ensure Lucky gets the job done quickly, Lomax makes a deal: $200,000 will be awarded to Lucky for the safe return of his daughter, but $20,000 will be deducted for every day that passes, denoted with a silly animation of dollar bills literally flying across the screen. This leaves Lucky with no room for mistakes – and no method of transportation as a hired goon lobs a grenade into his boat right at the outset. 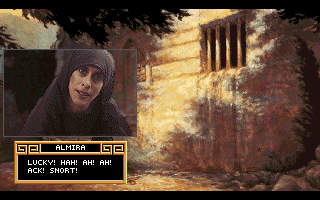 As to be expected, Heart of China plays out an awful lot like an Indiana Jones movie – the American protagonist, the ethnic sidekick, the love interest that isn’t actually interested, at least in the beginning. The title is also a bit of a misnomer, because only the first quarter of the story actually takes place in China. Once you’ve rescued Kate, she is poisoned, so you need to travel the globe – from Kathmandu to Paris to Istanbul – to find a cure. However, Dynamix does some unique things that set it apart from other adventure games. For starters, the game has numerous plot branches that, while their events seem similar, might end up making the game even harder. For example, the first task is to find a man named Zhao Chi, a Chinese ninja, and get him to join you on your mission. However, he’s incredibly scared of your “arrow-plane” and requires a bit of convincing. You don’t technically have to do this, though – the game lets you proceed without Zhao, although good luck trying to sneak into the fortress in China without him. Sometimes it’s possible to get yourself screwed over if you’re not careful, but it does lend to some replay value if you want to see every alternate approach to various situations. 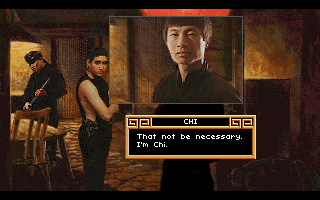 Once you’ve recruited Zhao (and eventually Kate), you can switch between these characters, each having different skills. For certain areas, you need to equip Zhao’s ninja mask, lest you get caught by the enemy. Other times you’ll need Lucky’s gun to shoot your way through bad guys. You can switch between them at any time, although they only affect certain puzzles. Many tasks are slightly silly – the first one involves hunting down seagull poop. Dynamix’s style of adventure game hinges on trial and error, especially when it comes to dialogue. Oftentimes you’re presented with multiple aggressive responses and you need to pick the one that’s the least offensive. (Usually the funniest one is the wrong one, as to be expected.) 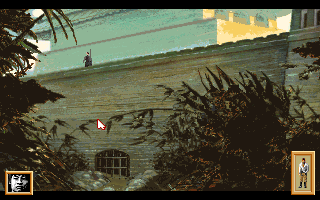 Beneath its unique structure lies an interesting visual style. All the characters are digitized images of real actors. Most of the graphics are comprised of comic book-style panels, with bits of animation on occasion. While most of the environments are hand-drawn and share the same style as Rise of the Dragon, they are done in a style that blends very well with the digitized actors. The photographs are occasionally a little grainy, but given the 256 color hardware limitations, they’re better looking than most DOS games of the time, especially Access’ titles like Martian Memorandum, which tried to pull off something similar. Sadly, the game was never released on CD, so there is no voice acting present. 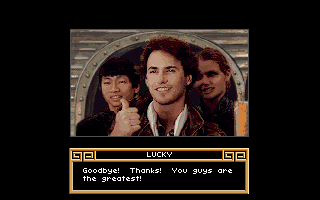 Finally, true to Dynamix’s style of interactive movie-style storytelling, there are a few arcade sequences. One is a tank simulator using the 3D simulator engine used in other Dynamix games. The tank chase is a neat idea, and is pretty intense the first couple of times, but it’s really hard, especially if your computer is too fast, as there is no game speed cap. The other is a side-scrolling action segment, not too unlike Rise of the Dragon. Thankfully, the developers opted to show mercy, allowing you to skip these sequences completely if you fail enough times. 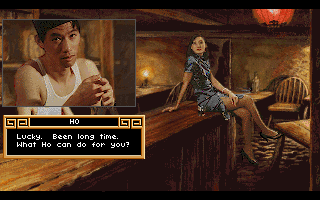 Despite some harebrained puzzles, their strange solutions, the completely innocuous ways you can find yourself losing, and the aggravating dead ends, Heart of China is still pretty fun. The inherent silliness to the whole affair shows that Dynamix clearly loved the story they worked so hard for, and it’s apparent in the writing, the artwork, the expressions of the digitized actors, just about everything. In other words, it works as a nearly perfect B-movie parody.