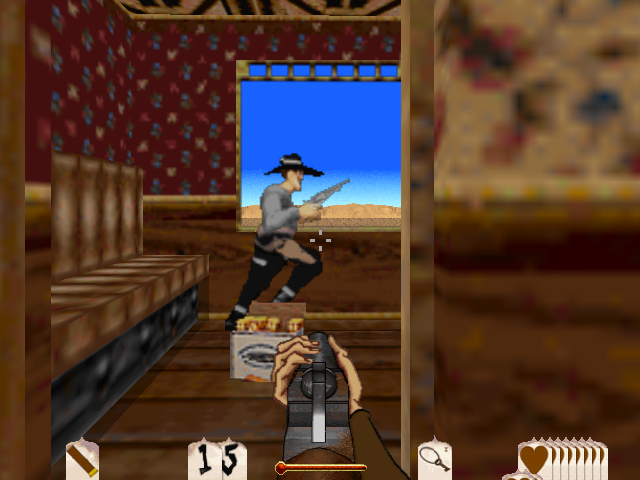 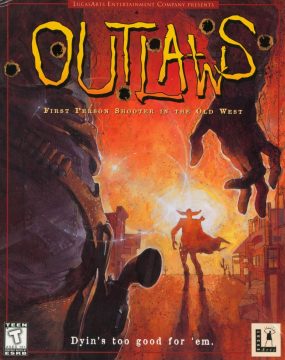 So, you know LucasArts for their Star Wars games, point and clicks, and cult classic darlings, but you may not know them for their work in the FPS genre. 1997’s Outlaws, a LucasArts wild west action game done in the style of classic western movies, is one of the last breaths of the DOOM style FPS as Quake began to change the game, and it sticks out among it’s contemporaries. It had surprisingly high quality production around the core game, and an actual focus on narrative that wasn’t too common in the genre at the time. That doesn’t mean it’s a lost masterpiece, mind you, far from it, but it’s something special in its own right. 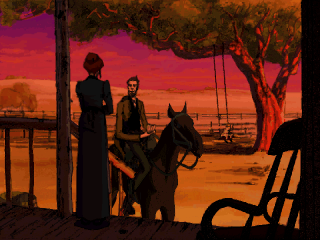 Before you even start the game, you get treated to some striking animated cutscenes, laying out the premise with strange, lanky proportions giving every character a life to them the actual game can’t hope to replicate. The voice acting is also very strong for this era, with scenes moving along and paying plenty of homage to countless western films, selling the violent emotional drama with confidence and sincerity. Doing the real heavy lifting is the score by Clint Bajakian, who you may remember for his work on Monkey Island 2, Maniac Mansion: Day of the Tentacle, Sam and Max Hit the Road, and much more, including compositions for major recent games like Uncharted and God of War III. It perfectly captures the feel of the classic western movie, complete with whistling, choir backing, and that sweeping, epic feeling central to the genre’s style.

The story sticks closely with classic western themes as well, telling a story of greed and violence and the tolls that violence can have on people. That does mean that the game has both the strengths and weaknesses of the genre on full blast, including a dead wife helping to kick off the conflict, but a late 90s FPS having a story this fleshed out is also rare in its own right. Transition through the levels is handled by killing a boss enemy and getting their death cutscene, where lead character Marshall James Anderson gets a hint on where to go next as we watch him move on and even get in a bit of action in the process. It makes the main campaign feel fluid – or at least does for the first few missions. 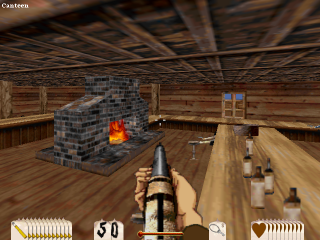 Unfortunately, Outlaws has a pretty bare bones core for a 1997 FPS release. It was really outpaced graphically by then, and it has aged even worse into the modern age. The style of the game is fine, but there are moments where you can see the limitations of the graphics and what they had to work with in the Jedi engine, including some buildings partly disappearing when you get on a high enough ledge and perspective destroying itself if you get close up to some walls or structures. It plays fine, but you can see the seams just exploring each level. While the music is sweeping and large, it never quite feels at home in the gameplay proper, and also suffers from some compression, which wasn’t uncommon at the time yet still disappointing, especially with a score this genuinely epic.

Your weapon set also sticks close to the genre basics and doesn’t excite because of it. A lot of older FPSes had to stick out by getting experimental with weapons and what you can do with them, or simply adding a ton of ridiculous feedback, like huge explosions or gore. Outlaws doesn’t have such touches and sticks to the basics the whole way, with even a mounted chain gun weapon feeling weak when fired. Level design is also disappointing, with a few segments being very obtuse in what you’re actually supposed to do to advance. The second level of the campaign requires you kill a set amount of enemies before the boss appears, and the number required is almost all of them. Several are also holed up in lock rooms in a hotel, the key being hidden away far too well and your sniping option, a scope on your rifle that doesn’t switch you to a zoomed in perspective, feels awkward to use. Even with the targeting cursor on, it feels a bit random when bullets hit from a far distance. 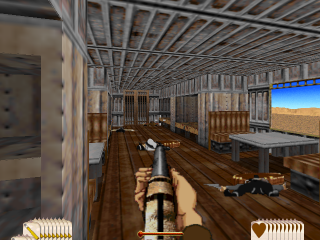 Some of this can be forgiven due to the era this was released, as nobody seemed to have got zooming down yet and Unreal was still a year away from release, but this feels sparse even by early 90s standards. The extra historical missions aren’t that interesting either, nor the standard local area network multiplayer. What seems to give the game any sort of legacy is the presentation, which is uniquely LucasArts. Fitting for a studio founded by a film company, many of their games took heavily from film conventions and tried to use those elements with their games. Outlaws pulls that same trick by being a very early game in the wild west gaming genre that really embraces those film influences.

Even if the game itself is underwhelming to play, it sticks in your head with those cutscenes, the desert scenery, old industrial building designs, and the wonderful score (which lost out to Parappa the Rapper for an outstanding achievement in sound and music during the 1997 AIAS awards). The game simply has a scope to it that was mostly unattainable for games like this. Where the rest of the genre were outsiders flexing the artifice of games and going as far over the top as possible, Outlaws tried to feel like something high end and mature. It doesn’t fully succeed, but it has an air about it no other FPS from that era had. 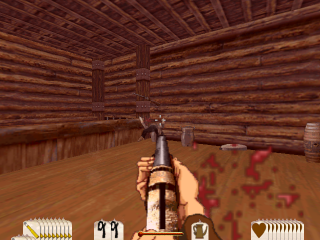 Outlaws may not be a fantastic game, but it’s a great example of how much presentation can lift a game up from mediocrity. It’s a memorable release that has managed to gather a dedicated fanbase in the past twenty years, doing something different from the rest of the pact before Unreal landed and made everyone completely reconsider what an FPS could be. As a game, it’s passable, but as part of gaming history, it’s one of the more interesting games in the LucasArts library.