Not very many people know that Truxton received a sequel, probably because it was only released in arcades and for the FM Towns computer. Tatsujin Ou, Truxton 2‘s Japanese title, means Expert King and it ties into the tagline, “Be a king rather than expert!”

The game is fundamentally very similar, though the graphics and sound have improved substantially, and the pacing is a little faster, with automatic fire and other niceties typical in early 90s shoot-em-ups. While Truxton felt very similar to Twin Cobra and the likes, Truxton 2 is a much richer experience. 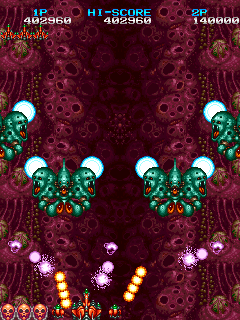 One of the main issues in the original Truxton was its lack of backgrounds, since a good chunk of the game took place over starry backgrounds. Truxton 2 fixes this with stunning backdrops that use scaling to full effect. The enemy designs get an upgrade too, looking absolutely amazing for a game released in 1992. Indeed, the visuals are absolutely fantastic, iterating on some of the more interesting designs of the first game due to the more enhanced hardware.

The weapons have been changed around a bit. Your ship still has its standard Red spread shot, but when power-ups are collected, the ship’s options are the ones that get the power boost. The actual weapons and their corresponding colors are switched around a bit too. Blue is still homing lasers, but Green is now your wide shot. Red shoots huge explosions that are short range, but do lots of damage. Lastly, Truxton‘s skull bombs are even cooler than ever, now being a huge screaming face that travels across the screen, shooting lightning bolts horizontally. 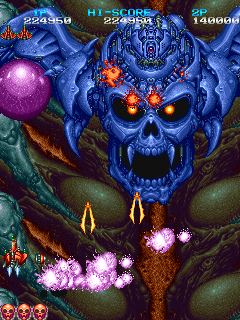 Truxton 2, like the first one, has incredibly long levels filled with tons of boss fights, many keeping with the “skull” motif. A few of the coolest are a giant skull that vomits bats, a humongous crab that can extend its neck like a giraffe, and a two headed robot moth that shoots lasers from its eyes. The popcorn enemies usually come in large groups and like to try to get up close to your ship or fire deluges of bullets everywhere. It’s a long journey – a bit too long, actually, with a single loop taking about an hour – but being able to say that you have defeated Truxton 2 is an accomplishment. 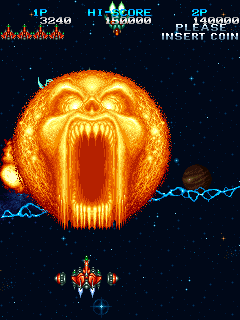 This game marks one of the biggest crisis’ of Toaplan’s existence. As with many other genres, the arcade shoot-em-up scene was being decimated by Street Fighter II and other fighting games. So the question was: do we try to cater to a broad audience and make a game everyone can enjoy, or do we cater to the hardcore fans, who may be much smaller in number but are generally more dependable. In this case, Toaplan went the “hardcore” route, though they may have erred too much on this side, because the game ultimately wasn’t very popular. The difficulty was adjusted downwards for the overseas release, and some Japanese fans feel that was the version that should’ve been released initially. Still, as with most of these cases, it does have a very devoted following, despite both its difficulty and its length being somewhat exhausting.

The FM Towns port by Ving is generally excellent. It can’t quite replicate the arcade resolution, so it’s a little zoomed in and feels a little bit faster, but otherwise it’s pretty close. The graphics are taken straight from the arcade game and still look fantastic, though the parallax scrolling is gone. There’s a bit of extra slowdown during for the big explosions and hectic moments, but otherwise plays very well too. 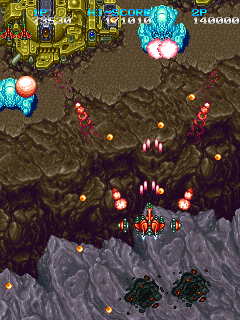 Pipiru is very well hidden in this game. Near the end, in the level with the gigantic alien heads, Pipiru is imprisoned inside one of them. If you blow up the correct alien head, the little guy bursts out and showers you with power-ups and bonus points as a reward. 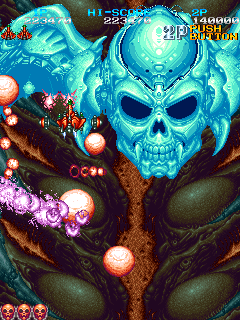