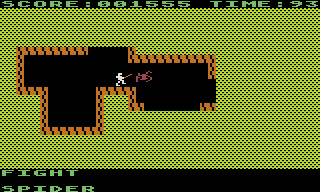 It seems like Automated Simulations had planned a third major Dunjonquest episode after Temple of Apshai and Hellfire Warrior. In an article he wrote for the magazine Byte from December 1980, Jon Freeman mentions the title Cliffs of Tyyr in one breath with the former two, but apparently that went unrealized due to Freeman’s split with the company. While he had already moved on in 1981, Connelley’s final words in the matter of Dunjonquest came about two years later. But Gateway to Apshai doesn’t run on the old Dunjonquest engine anymore, in favor of an action-based real time combat system. It is, however, linked to the first in the series through its name. It is often considered as a prequel to Temple of Apshai, as it deals with a young adventurer fighting his way through the caverns that lead to the temple, while the ant god’s sanctuary itself is never reached. Yet considering how the game twists around the lore established in the first game, this supposed connection has to be taken with a grain of salt.

Now all of a sudden there are legends telling about the “Apshai’s Greatest Warrior”, only whose blood can save the country from imminent destruction by rediscovering the lost Temple of Apshai. So after the ant god has been established as a somewhat villainous but definitely dark deity before, it is now depicted as a savior without further explanation. It is also no longer refereed to as related to ants. Although the threatening image of an ant man still decorates the cover in most releases of the game, you’d be hard pressed to find it again in the dungeons (yep, the spelling “dunjon” is also gone). Anyway, you’re the only left kin of “Apshai’s Greatest Warrior”, so your task is to head out into the ruins, not to second-guess historic accounts. 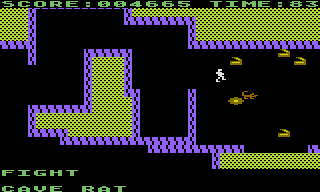 Even after the success of Rogue and Epyx’ own Sword of Fargoal, Gateway of Apshai favors designed dungeons instead of randomly generated content, but this time it’s 128 individual dungeons, so it doesn’t make much of a difference, as “normal” players are not likely to visit most of them more than once. What the game takes from Sword of Fargoal, however, is the “fog of war”, to use that anachronistic name for areas concealed under a more or less mist-like cover until they’re explored by the player. Using traditional ARPG conventions, the protagonist is controlled directly with the joystick, the fire button executes the currently selected action. One of three F-keys (on C64) switches between melee and ranged weapon use, another cycles through the inventory. The most important one handles everything else, from lockpicking over searching for secret doors or traps, up to several status menus. The latter ones are especially vital as the game for whatever reason never display’s the hero’s current constitution on the main screen.

More important for that space it seems was the score display, as if to emphasize that this is an arcade-like experience to a company management dead-set on focusing on action games. The other “RPG elements” have been retracted a bit, too. Of six main attributes in the Dunjonquest series only three are left, strength, agility and luck. There is no counter for experience points, but there are nonetheless ways to raise those three, as well as the maximum amount of hit points, however concealed to the player they may be. The innkeeper’s store was also nixed, so you’re stuck with whatever gear you find in the depths. 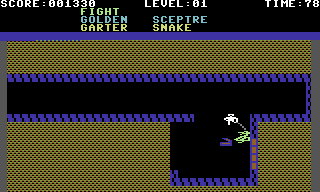 Fortunately, treasures are found in abundance – more often you’ll have to deal with a full inventory rather than a deficiency of needed items. Weapons and armor are a given, as well as the score-relevant gold and jewels, Gateway also sports an array of different spells. Most are all too familiar to the experienced RPG player now, like protection, teleport, stun and death, but there are also some more particular ones, for example reflect, which redirects any inflicted damage back to the enemy, thus equalling temporary invincibility. The most interesting spell by far and probably never used again in any later game is the “Blast” spell, which instantly drives a tunnel through masonry and stone, creating a new passage to whatever lies beyond.

The combat system is simple enough with little surprises. The player just runs near enemies, tries to strike them without getting hit, and then it’s most wise to retreat, as all enemies constantly charge at the nameless hero, dealing damage as soon as they touch him. Many enemies are almost impossible to beat without taking some hits in turn, so it’s important to make sure the character has reached an appropriate level.

Usually it’s best to explore as much of a dungeon as possible for maximum stat increase, but each stage can be played as often as desired, so there is no real pressure behind the time limit that’s running at each raid. None of the dungeons has an exit, so there’s only three ways to get out: Death, running out of time and progressing to the next level, which opens a new set of 16 dungeons, up until level 8. There’s no way to go back a level, so it’s best to wait with ascending until the character is surely ready for it. After reaching and completing level 8, there’s nothing else to do, although the game never ends and just waits for the player to either repeat the last 16 dungeons indefinitely or just turn off the computer in frustration. The dungeon crawling is also only fulfilling until the hero grows too strong for the challenge, making this lack of an ending (which of course stems from Dunjonquest roots) all the more unsatisfactory.

Gateway to Apshai was released on Commodore 64, Atari 8-bit computers and the ColecoVision. While the home computer versions are identical safe for a few minor visual differences and key mappings, the console port is a very different beast, with all new dungeons and faster gameplay. This in consequence also makes the game much harder than the other versions. Thanks to the numerical keypad on the ColecoVision controller, separate keyboard input is gone. No version looks as good as the “screenshots” on the back of the box, making an early example for false advertisement through retouched screenshots.

While the above run-down tends toward a slightly negative tone, Gateway to Apshai is still pretty fun while it lasts. It does have a few design decisions that seem inappropriate even for 1983 (not hit points on screen!), but in other aspects it is groundbreaking. Its historical meaning as the first proper action RPG, an innovation DunjonQuest has always hinted at during its run, cannot be overstated. 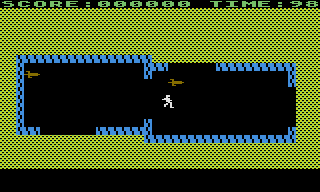 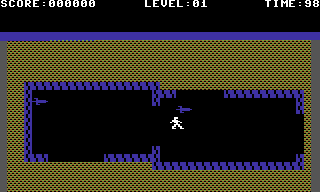 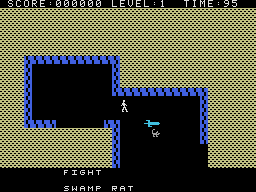