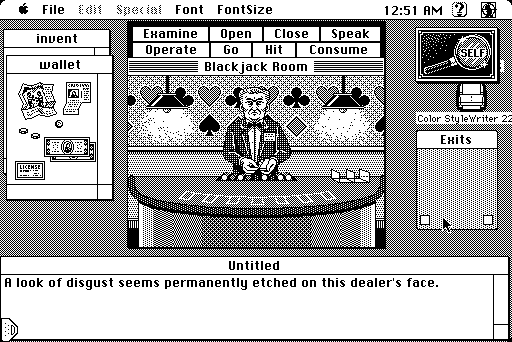 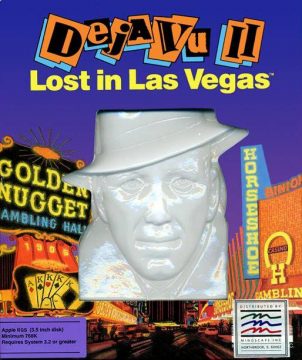 You wake up from a stupor that feels like a chronic hangover after a wild week in Vegas. There is a throbbing bump on the back of your head… As you come out of the fog, you breathe a sigh of relief as you realize that you still know your own moniker, Ace Harding. With that, the events of the previous 48 hours start to float back…

Ace Harding cleared his name at the end of the first Déjà Vu, but as this sequel explains, he’s hardly out of trouble. It turns out that Siegel, the dead guy in the bar in the first game, had been running some cash for the mob, and a sizable sum has gone missing. Seeing that Ace was the last person in contact with Siegel, the mafia figures he must’ve done something with it. Being that these mafia folks aren’t exactly the understanding type, they send a very specific message to Ace – find our money, or you’ll be wearing cement shoes. 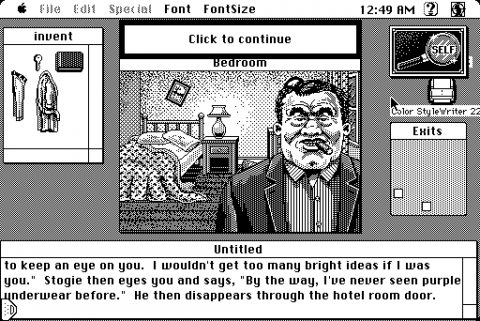 Ace starts the adventure in Las Vegas, where he must get together some cash to take a train back to Chicago. There he revisits Joe’s Bar to hunt for clues before returning to Las Vegas to deal with the mob. Unlike the first game, the cops are of little use for saving your ass. Instead, Ace needs to frame another mobster by planting all of the evidence on him, causing the two factions to kill each other and leave Ace in the free and clear. If you take too long, the mob will make good on their promise of disposing of you, making this yet another ICOM game with a set time limit. It’s a short game, though, roughly around the same size as its predecessor.

The events lead to a pretty clever twist on the events of the first game, but still, Déjà Vu II just doesn’t feel quite as compelling. Ace has full possession of his faculties this time around, which means that unfolding the mystery of the stolen money just doesn’t draw you in on a personal level without the amnesia gimmick. Still, it is pretty cool to muck around Joe’s Bar again, and it heralds the return of the hooker from the first game, giving her a real name this time – Sugar Shack.

There’s still a bit of gambling to be done in Las Vegas, although you need to do something to tilt the odds in your favor. Once you get to Chicago, you’re still ferried around by a taxi, although it’s completely free this time. You get to visit Ace’s own apartment, too. Like the first game, most of the puzzles are barely puzzles, so long as you explore, pick up, and open everything you find, and most obstacles can be passed by using your trusty pen knife.

There really aren’t too many ways to get yourself killed besides running out of time, or doing something stupid like getting lost in the desert (which you only ever need to venture to if you run out of money) but you can get accosted or even arrested by taking off your pants in public. In the alleyway of Joe’s Bar you’ll also randomly run into a crazy lady who spouts all sorts of crazy nonsense (“SAVE THE FURNITURE!”), including some references to famous movies like Soylent Green and Dr. Strangelove. The game takes place in 1939, substantially before any of these were released, but it’s all in good silliness. Plus, the text descriptions are still as funny as before. Trying eating random objects and you’ll be met with lines like, “The chair would probably give you gas pains.” 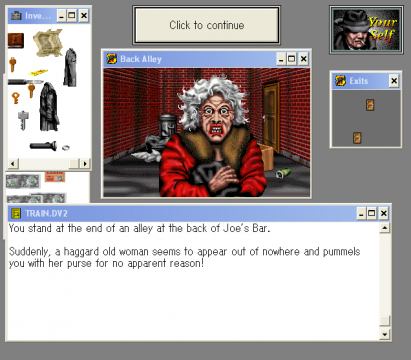 Like all of the other MacVenture games, Déjà Vu II was released on the usual home computer platforms. Unlike the previous releases, the IBM PC version is substantially better than the Amiga versions, finally graduating out of awful CGA in favor of 256 color VGA. Déjà Vu I and II were bundled together for the Windows re-release. An NES version was planned, and copies were previewed in magazines around 1992 or so. However, it was never released, perhaps due to the waning popularity of the NES. Prototypes are said to exist, but none are currently available on the Internet.

However, Déjà Vu II did end up on the Game Boy Color, on the same cartridge as the first game. This version is most likely based on, to some degree, the unreleased NES version. It’s hard to tell exactly – the graphics in the Game Boy Color game don’t match up to the prerelease NES shots – but then again, the first game’s visuals were almost entirely redone for the GBC release too. The revamped blackjack minigame seems to match the screenshots of the NES game though – in the computer version, it was very simplistic and never showed up a close-up view of the cards. The interface works the same way as the other GBC ICOM releases, and includes an “ADDRESS” section, much like the first game, to give to the taxi driver. This was probably unnecessary, but it does make things consistent with the NES version of the first game. In the computer versions, the taxi driver was supposed to be deaf, so you didn’t need to type in the destinations anyway. Instead, you would just show the item that had the address, and he’d take you there. (The train schedule to go to the train station, for example, or your driver’s license to get to your apartment.) In the GBC version, you can just look at the item, and the address is automatically remembered. Other than these small changes, the GBC game is very faithful to the computer releases. The cigarettes are changed to gum, and “Joe’s Bar” is once again “Joe’s Place”, but otherwise it remains mostly uncensored. It shares much of its soundtrack with the first game, although the new music, played in the Las Vegas areas, is mostly forgettable. 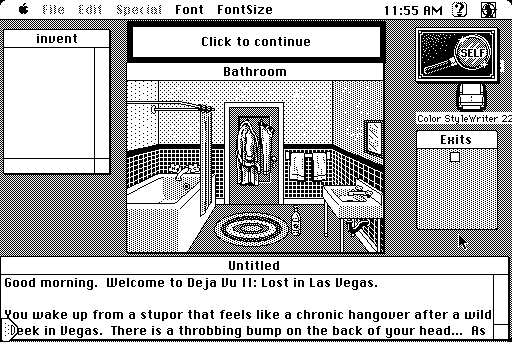 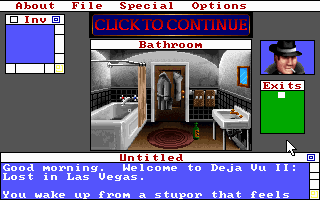 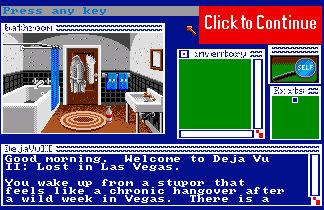 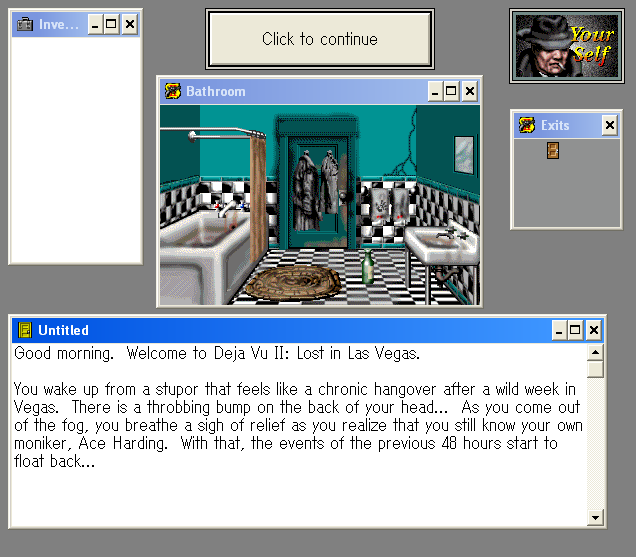