Lost in Time is sort of like a bizarro French version of Back to the Future. The heroine, Doralice, finds herself mysteriously transported to a Spanish galleon circa 1840. The only thing she can remember is her inheritance of a gorgeous French estate, which just happens to have the same Spanish galleon sunk in her backyard. Through flashbacks, she recalls the events that caused her to slip through time, and eventually discovers a scheme by a time bandit named Jarlath, who is not only smuggling a variety of secrets, but seeks to kill Doralice’s ancestor, thereby voiding her existence. 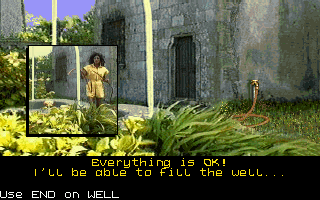 Despite the dramatic science fiction pretense, Lost in Time is a silly game. Most of the exposition is delivered by characters that are so conveniently placed that it seems unbelievable – like the Time Cop that just happens to be available in the ship’s hold to discuss Doralice’s situation – and Jarlath acts and talks with the grace of a Saturday morning cartoon villain. 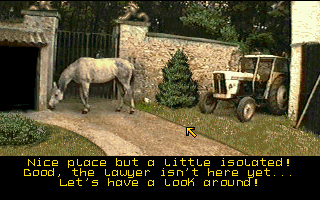 But a large part of the goofiness arises because it was developed by Coktel Vision. They were on the forefront of the multimedia revolution in the early ‘80s, making judicious use of 3D computer rendering and digitized actors, and releasing these titles on floppy disk format before CD-ROMs began to catch on. Every time you take an action, there’s a small picture-in-picture video showing the result, which was mighty impressive for something back in 1992. It uses the same first-person perspective, and same interpreter, as Ween: The Prophecy, as well as the Inca games. 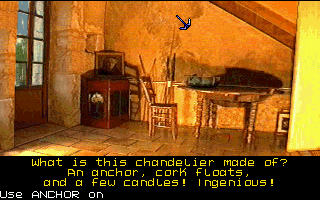 Of course, these productions were silly and low-budget, and suffered from some extremely awkward French-to-English translations. In Lost in Time, the three major locations are all rendered in completely different art styles. The galleon is computer-rendered, the French mansion consists of digitized photography, and the island of St. Cristobald has painted backgrounds. All of the characters are digitized actors in all three segments, and everything clashes immensely. There’s very little full motion video during dialogue, so most of the characters are just still photos with flapping lips. The exception is Doralice, as the camera seems to only focus on her eyes. It might try to sell itself as a serious adventure, but it’s all too haphazard to be taken at face value. Coktel Vision followers may also recognize Doralice as the protagonist of their earlier game, Fascination, but Lost in Time shares none of that title’s “adult” qualities, and is mostly suitable for all audiences. 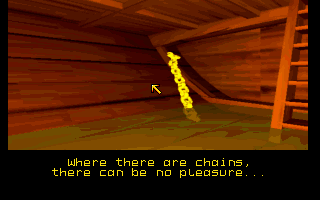 While the concept, story, and execution are laudably cheesy, you spend most of the game wandering around the mostly abandoned locations – the ship and the estate – stumbling upon roadblocks and MacGuyvering items where necessary. This being a Coktel game, the puzzles are largely insane. At one point, you’re in a basement, and there’s an item you can’t reach. You can knock it down by popping a cork off a bottle, which is a fair solution. But you need to retrieve that cork for a later puzzle, which is accomplished by flooding the whole basement (another whole multi-step puzzle), causing it to float up in a nearby well. That all seems somewhat excessive. Many puzzles involve some fairly questionable science, as it feels suspect that vinegar is considered an appropriate substitute for battery acid. And despite what the game seems to think, fiberglass isn’t bendable, although that particular item’s description may just have been mistranslated. All of these mindboggling tasks tend to bog down what would otherwise be an ironically amusing adventure.

Lost in Time was released in two parts when it was initially released on floppy disks in Europe. Both games were bundled together in North America, where it was published by Sierra, and the CD-ROM version includes both games as well. They flow seamlessly into each other and were probably only split up in the first place due to disk space concerns. The CD-ROM version also includes voiced dialogue for the major cutscenes, as well as CD audio music and some slightly smoother video. 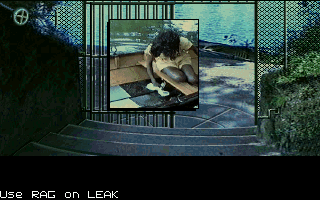