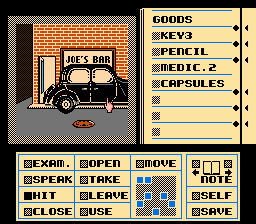 You are waking from a stupor that feels like a chronic hangover after a week in Vegas. There is a throbbing bump on the back of your head, big enough to make your hat size look like an Olympic record. You notice your right palm is covered with dried blood, but you neither see nor feel any open wounds on your body. You see yourself reflected in the mirror. The face stares back at you as though it belonged to a stranger. You realize with horror that you can’t remember who you are!

ICOM’s inaugural game pulls the oldest trick in the book – amnesia – as a way of driving forward the story. Although terribly overdone in literature, as a narrative mechanic for a video game in 1985, they pulled it off remarkably well. Here, you wake up in a dilapidated bathroom stall, with a handful of your personal effects and one helluva headache. Upon exploring, you find yourself in a bar, one that happens to be deserted. Except for the bullet-riddled body on the second floor, anyway. And the BMW parked outside, with a bomb under its hood and a fat, unconscious woman in the trunk. Things certainly look fishy. Of course, you can’t go to the police with any of this, because all of the evidence implicates you as the prime suspect. Your only hope at redemption is by finding the real criminals, gathering evidence, and clearing your name. 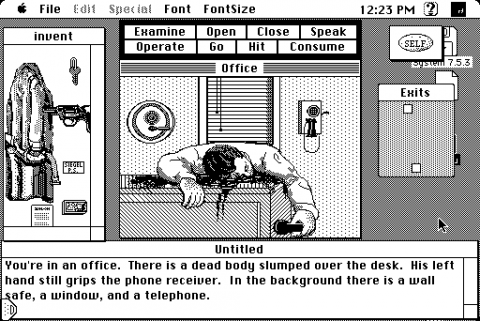 As you stumble around, you’ll eventually trigger memories of your identity and your surroundings – this is Chicago in 1939, and you are Ace Harding, formerly a boxer, now a private eye. As such, exploring and piecing together the facts plays a huge role in the game. There is very little actual puzzle solving, at least in the traditional sense. Most of your quest requires being carefully meticulous, reading all of the notes you can find, and uncovering keys to unlock new locations. Although a good chunk of your investigation takes place at Joe’s Bar and the surrounding area, you’ll also discover several addresses of other locations around Chicago, which can be accessed by taking a taxi cab. Money is important, mostly because you need it to pay the cab drivers, and the only source of cash is from the slot machine hidden in the basement of the bar. There are at least enough fail safes to keep you from getting stuck – there’s always some loose change to find if you run out, and one of the taxis will even give you a free ride if you find yourself stranded.

It’s pretty strange that, given your current state as a wanted criminal, the police aren’t actively chasing after you, although they will apprehend you if you happen to walk through their front door. The biggest threat is the drugs flowing in your system, which will slowly kill you, unless you discover the antidote. This hard time limit is plenty annoying, but since the game isn’t terribly long, it’s not a huge deal to play it through again more efficiently if you die. As you explore the streets, you’ll also be ambushed by bums, hookers, and a particularly persistent mugger. These folks can be dealt with by either slugging them in the face or giving them some cash. Of course, any good private eye carries a firearm, although it’s more used to break down doors than kill people. If you try to shoot someone, they’ll either beat you to the draw, or the police will immediately show up to put a damper on your day. In keeping with the pulp detective vibe, every time you hit someone, the words “SOCKO” fill the screen.

In its brevity, there’s no doubt that Déjà Vu feels a tiny bit insubstantial, but the plot is well told for what it is, and the writing is surprisingly funny. “One could admire the quality of this chair for hours on end.” the narrator replies dryly when checking out a random piece of furniture. “This table has four legs.” he astutely observes in another. Try examining yourself and you’re told that “You surely need an examination the way you play this game.” It’s pretty clever how the game manages to balance the humor with all of the murder going on around you. 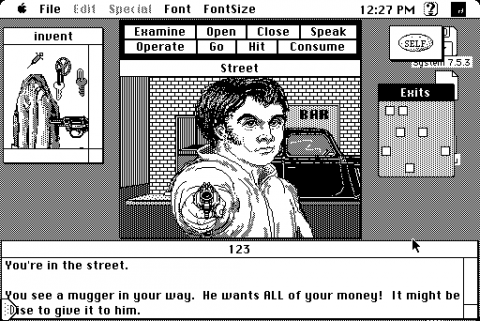 The computers ports are very similar to each other. The original Macintosh version runs in a relatively high-resolution window and is completely integrated with the system interface, using the same dialogue boxes and fonts. However, the visuals are entirely in black and white, although they’re quite attractive in their minimalism. The Atari ST, Apple IIGS and Amiga versions have color graphics, which are different from the original Mac visuals, and while they technically look better, the rest of the interface isn’t as crisp, since it runs at a lower resolution. However, in these versions, there are some sluggish load times between every action. The DOS version is by far the worst, taking the graphics of these color versions but downgrading them to eye-piercing four-color CGA graphics. This version also does not allow you to resize or move the windows. The Commodore 64 version has unique graphics as well, and while they’re quite pixellated, they’re still a bit better than the DOS version. However, this version lacks mouse support and is troublesome to navigate. The PC-88 version was ported and published in Japan by Pack-In Video, and is similar to the Amiga version, although the graphics have been reduced to 16 colors.

The Windows version, published in 1996, over ten years after its initial release, is fully integrated into the Windows interface, like the original Mac version. The visuals have been completely redrawn once again, with crisper and more colorful graphics than any other release. Despite the technical improvement, the art style is pretty gaudy, and most of the characters, Ace in particular, look remarkably ugly. This version was used as the basis for the PocketPC port, released in 2002. There’s no real music in any of these versions, as the game is played almost entirely in silence. Most have some digitized sound effects, at least, the quality of which also varies amongst ports. Naturally, they sound horrible coming through the PC speaker.

The NES conversion, published by Kemco/Seika, however, differs substantially in many ways. The basic storyline, locations, text and puzzles are the same, but all have had slight tweaks. The 16-color graphics are completely unique, although similar in style to the Amiga version. The interface introduces some niceties that add to the atmosphere. It uses a warping effect, complete with sound effects, to transition between rooms, while all of the text is displayed as if it was typed by a typewriter. The interface has been altered to remove the drag and drop inventory system, instead adding “Take” and “Leave” verbs, and getting rid of the “Consume” action. (You instead just “Use” items on yourself.) Your inventory now shows up as text on the right side of the screen rather than visual icons. The “Leave” action is almost entirely useless since you can only drop items in a specific place instead of leaving them randomly strewn around, but since you have unlimited inventory space in this version, this is never an issue. While you can still save your game at any time, getting killed will simply rewind time and send you back to the prior screen. It’s much friendlier than the PC versions, which constantly forced you to save and reload. 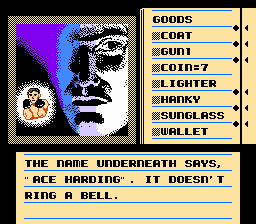 On the downside, navigation is something of a pain. Moving the cursor with the controller is sluggish compared to the mouse. Furthermore, the computer versions let you open doors, look at items, or move simply by double clicking on the screen. The NES interface is not context sensitive at all, so you need to select from the verb window for every single action, making the whole game feel much slower.

The computer versions had several instances where you needed to discover and remember addresses to give to taxi drivers, which needed to be typed in. Since the NES does not have a keyboard, these have been simplified into an “Address” page in your inventory, where addresses are automatically recorded when you learn them. While much of the text maintains the same flavor as the PC version, the writing had to be simplified and edited to save ROM space. It also falls victim to Nintendo’s censorship policies. Instead of a shot glass of gin and a pack of cigarettes, you’ll find a glass of seltzer and a pack of chewing gum. Instead of a syringe to administer drugs, you need to use medicine capsules. Of course, this causes an inconsistency with the intro text, which still says that you have puncture marks from a needle. 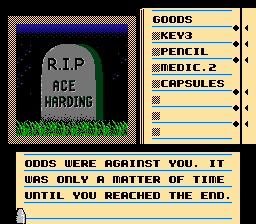 Some scenes have also been taken out, too. In the original version, when you beat up the hooker (who, to be fair, was going to shoot you if you don’t act first), if you try to hit her again when she’s down, you get a flashback of your priest warning you not to do terrible things. In the NES version, it just displays a generic “you can’t do that” message. The NES version also never explicitly refers to her as a hooker – she’s just some random lady. When you die in the computer versions, you either get a shot of a morgue, with a close-up on your toe tag, or pictures of creepy ghosts. This was perhaps a bit too morbid, so it was changed to a tombstone with an “RIP Ace Harding” message on it. It doesn’t quite make sense at certain points, since you can technically get killed before you ever learn your name. The death text is also amusing – “From the beginning the odds were against you. It was only a matter of time until you reached the end. You’re history!!” Certain actions are required in order to force the plot to progress – you can’t even leave the bathroom in the beginning until you’ve looked in the mirror first. All of the computer versions also greeted you based on its internal clock (i.e. “Good afternoon, welcome to a nightmare come true”), which was removed from the NES version of Déjà Vu, as well as all the other ICOM games. The Japanese version suffers from a bit less censorship – the Game Over screen is a creepy skull with the words “Rest in Peace” below it, closer to the original Mac version, and the dead guy in the bar is soaked in blood, where he is clean in the NES version. The seltzer is also now ramune soda.

Déjà Vu was also re-released several years down in the line for the Game Boy Color, where it was bundled with its sequel. It’s similar to the Game Boy port of Shadowgate, although the interface has been slightly altered to use icons for the commands rather than text, saving valuable screen real estate. While the Game Boy version of Shadowgate used the NES graphics as a basis, the visuals here appear to be completely new, and actually look quite a bit better. However, it is not backwards compatible with the original Game Boy. The music is mostly the same as the NES version, although the drums aren’t quite as crisp. The text is almost entirely identical, although the inconsistency about the puncture wounds in the opening has been fixed, and the bar is now referred to as “Joe’s Place” rather than “Joe’s Bar”. 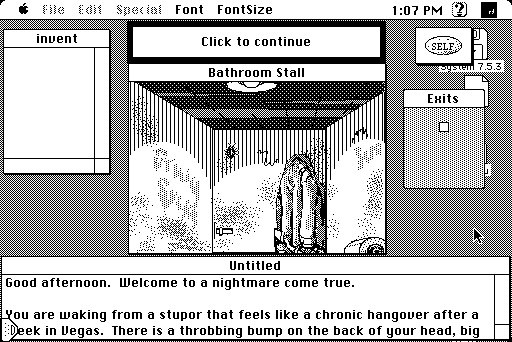 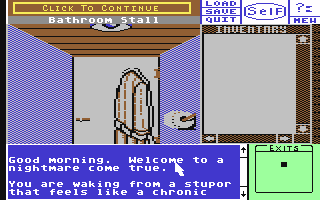 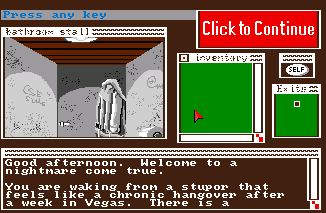 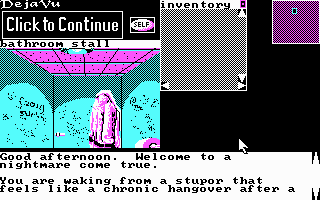 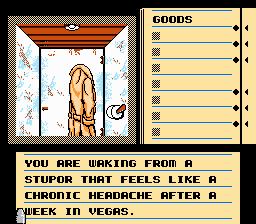 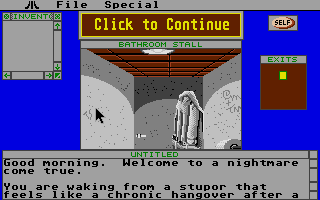 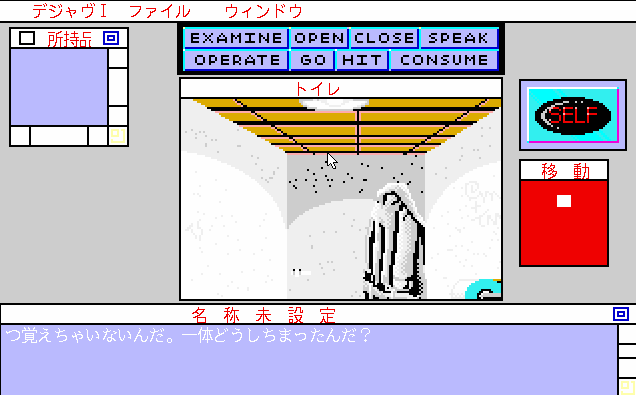 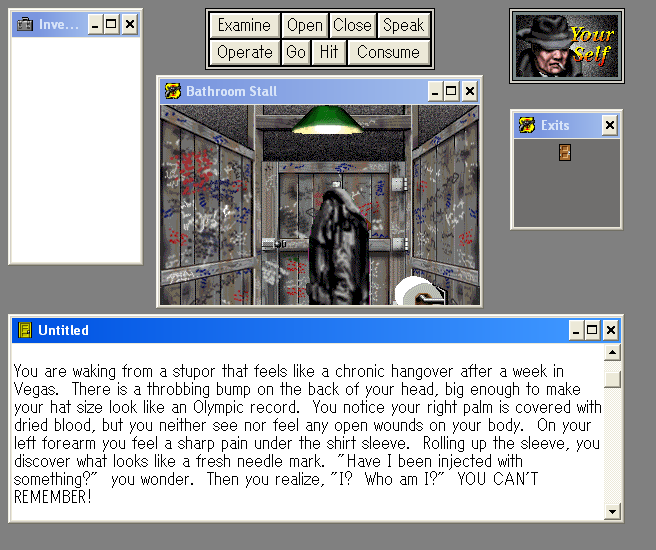