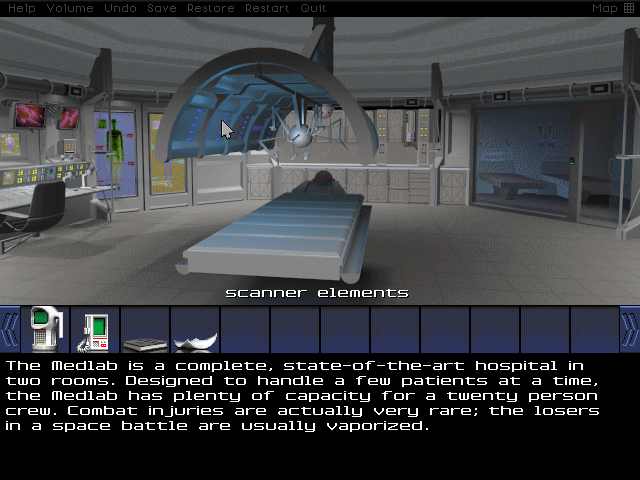 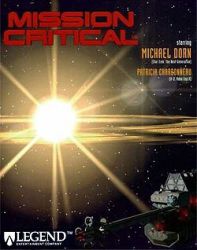 Science fiction loves to do two things – show us how awesome the future might be, and show us how the march of technology will inevitably destroy us. In the world of Legend’s Mission Critical, a war has broken out between the countries of earth. The United Nations, fearing for the future of the human race, outlaws technological development, while the Alliance of Free States secedes in favor of their freedom. The results is a cold, bloody war that stretches far into outer space.

In the midst of this war, an exploration vessel, the SV Jericho, is escorted by the military vessel, the USS Lexington, on a secret mission. Before they can reach their goal, they are ambushed by the UNS Dharma of the United Nations, and their fighters are completely wiped out. With true surrender not being an option, the captain of the Lexington sticks you, an unnamed lieutenant, with a syringe and hides you in a corner of the base. The rest of the crew is captured by the Jericho, but they also manage to smuggle a small nuclear bomb on board. They sacrifice themselves to destroy the Dharma but leave the Lexington in relative safety. When you awaken, everyone aboard the Lexington is gone, and the ship is in bad shape. With only the instructions by your departed superiors, it’s up to you to get the Lexington back in shape, and complete its mission, whatever it was. 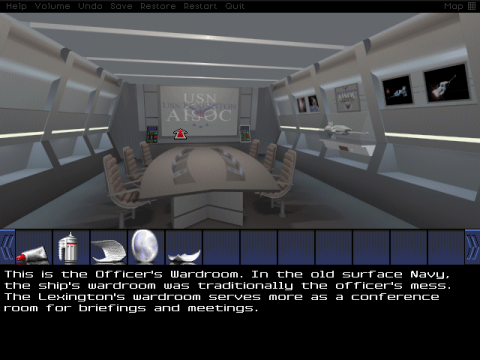 That’s the quick summary behind Mission Critical, although there’s much more story behind that. Like most Legend games, there’s an astounding amount of detail, both in the history of this future universe, and the technology that makes it all work. There’s an obvious Star Trek influence behind all of this, even if the actual story is far more bleak.

For a good chunk of the game, though, the story is hardly in the forefront. The first three-quarters puts you in the role of an intergalactic repairman, ferrying yourself all over the ship to repair hull breaches, fix communication systems, prevent the reactor from exploding, defuse a bomb set by a traitorous crew member and so forth. It’s not until the last quarter when things pick up, where you crash land on an alien planet and get involved into some kind of trippy alternate dimension/time traveling stuff, all of which ties into the overall message about the dangers of technology. While it is typical classic sci-fi at its heart, the payoff is mostly worth it, even if most of the plot is delivered to you right near the finale.

You’re almost entirely alone on this journey, so you spend most of your time walking through the ship’s largely featureless corridors. You can piece together bits of the background story by reading journals or asking the shipboard computers, once you’ve gotten them operational. Through these documents, there are at least half a dozen characters that technically have roles in the story, even though you never see nor hear nor talk to them. Obviously they’re all dead by this point, but it would’ve done plenty of good if their logs were voice acted or there was some kind of portraits, so you could identify a character by more than just their name.

Much ado was made about Michael Dorn appearing in the full motion video segments, where he plays the captain, but there are only three characters that ever appear in these segments. The video quality is pretty crisp for the time, at least, and the actors do a decent enough job, considering they spend most of their time staring straight at the camera and looking concerned. But these segments are largely isolated to the beginning and ending of the game. 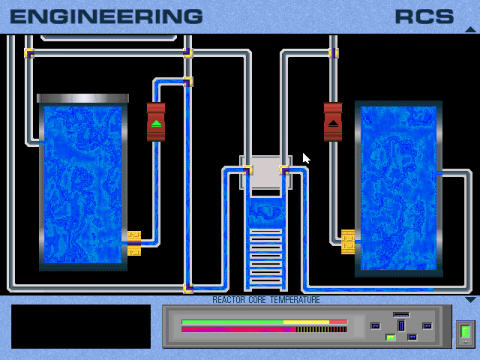 The puzzles are fairly straightforward and inventory based, which mostly involve tracking down the proper repair tools and figuring out where to use them. Occasionally you’re presented with some variety, like playing with valves to properly cool a reactor core or relaying signals through a series of satellites by studying star maps. But the most interesting is a real time strategy segment, which is less of a puzzle and more of a mini-game. Here, you control three types of fighter drones to protect your capital ship while destroying all of the enemies in the era. The graphics are all displayed in wireframe, but they’re animated quite nicely and it looks pretty cool in action, especially considering you can zoom out and rotate the view in three dimensions. It’s fairly clumsy compared to a legitimate RTS, though, as screen scrolling is awkward, and it’s tough to command multiple units at the same time. Still, considering how disastrous these segments usually are in an arcade games, this one turned out pretty well. You need to fly through eight training courses as well as a handful of live exercises, as you fend off attacks from UN ships, and it also plays a factor in the climactic scene. However, if you’re not interested in any of this, you can also just set the difficulty to the lowest setting, so the computer will just play (and win) for you. 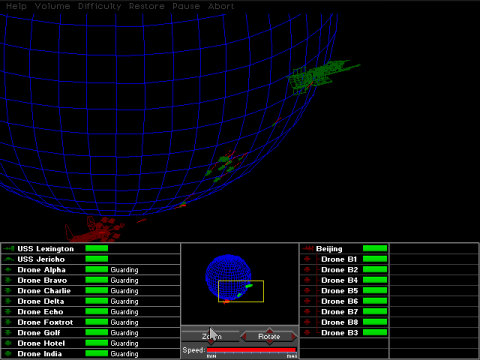 There’s a lot of CG animation, although it’s used inconsistently. Sometimes you’ll get a smooth video of walking from one end of the hall to the other. Sometimes you’ll simply jump forward with no transition at all. You can turn to the left or right, but it just scrolls to the next picture instead of smoothly panning over the scenery, which ruins the immersion. The cinema scenes showing the outer space battles may have looked impressive back in 1995, but they’re sparse and boring now.

Most of Legend’s games at the time were based on literary properties, like Pierce Anthony’s Companions of Xanth, Terry Brooks’ Shannara and Spider Robinson’s Callahan’s Crosstime Saloon. Mission Critical is one of their few original stories, and while it’s fairly standard sci-fi, it’s also very well written and thought out, as most of their games are. But as a game, it’s poorly paced and rather dull, to the point where it probably would’ve been better off as a book. Someone at Legend must’ve felt the same way, because not long later, they published a sequel in novel form. Dubbed Mission Critical: Death of the Phoenix and written by sci-fi author Paul Chafe (who had nothing to do with the development of the game), it focuses on a man named Lewis Tyrell, who was a captain in the United Nations army. The UN loses due the actions from the game, and so Tyrell is captured and sentenced to a life in prison. The rest of the novel deals with his escapes and adventures. It helps expand the well established universe from the game, and also provides a different view of the conflict, given how it portrays the Alliance in a less than favorable light. It also references some events and locations from the game.