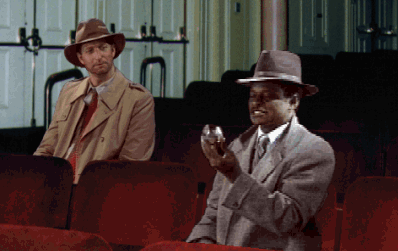 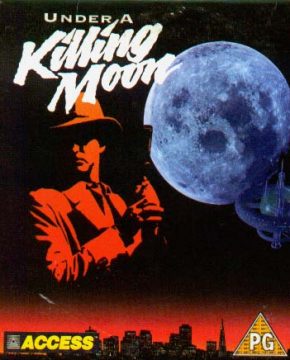 Tex Murphy disappeared from the gaming world for three years, only to resurface unexpectedly at the end in 1994 in Under a Killing Moon. Of course, three years is forever in the computer world, with sound cards, CD-ROM drives, and SVGA graphics becoming standard since the dark old days of Martian Memorandum. With this vastly improved technology, Access was able to realize their vision that was started with the first two games. FMV games were certainly not new to the market, but Under a Killing Moon, along with Origin’s Wing Commander III and Sierra’s Phantasmagoria, sought to advance the genre beyond mere shooting galleries or choose-your-own-adventures. 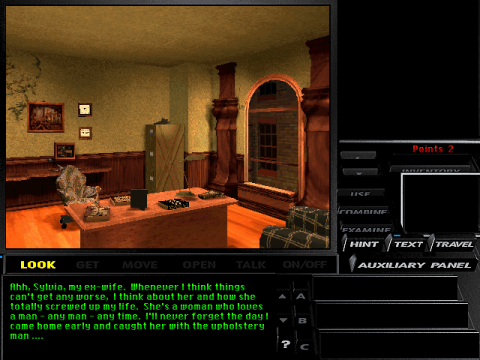 The game begins with the disembodied voice of the “Big P.I. in the Sky” (played by James Earl Jones) as he laments to his Smithers-esque partner that Tex Murphy is prophesized to save the world. (“Spade? Marlowe? Sorry, both dead.”) Tex is, of course, down on his luck, and living in a pathetic excuse for an office. He’s just about to hit rock bottom until he solves a mystery at the local pawn shop. With a renewed sense of confidence (and the cash to actually purchase a fax machine), Tex is quickly contacted by a mysterious client, who wishes him to steal a very particular statue. Tex doesn’t realize it, but this job soon involves him with a cult obsessed with genetic purity, and their plans to destroy billions of people via an orbiting space station. And naturally, Tex is the only one that can stop them. The story takes place over six days, although two of the days focus primarily on secondary mysteries that have little to do with the main plot.

Looking at the cover, you’d never know it was part of the series – the box never made any mention of it, and it’s not until you begin the game that Tex makes some references to his past cases. A few familiar characters make reappearances too, like the snarky cop Mac Malden and the rather unhinged Lowell Percival, as well as a few brief appearances by Sylvia (from Mean Streets), who married (and quickly divorced) Tex, leaving him particularly jaded towards women. The game introduces several new characters whom are friends of Tex. These include Rook Garner, the cranky pawn store owner; Chelsee Bando, the cute newspaper saleswoman; and Louie LaMintz, the owner of the local diner. Tex spends much of the early chapters exploring the slums of Old San Francisco where his office is located, and chatting with the locals for clues. 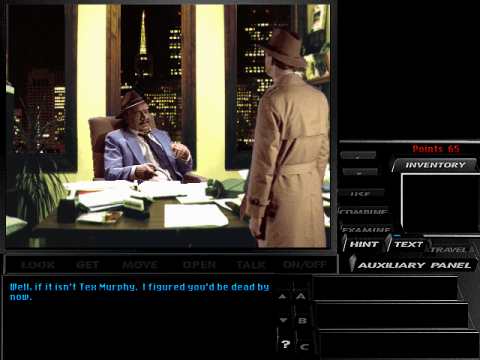 All exploration is done in the first person perspective, with fully 3D movement, in what Access dubbed the “Virtual World” engine. The amount of control is unparalleled compared to any of the first person shooters at the time, and even substantially more detailed than Ultima Underworld, its closest equivalent. And it looks monumentally better, on several orders of magnitude. The detail put into each and every room is unparalleled for any game at the time, and looks remarkably crisp due to the high resolution. By default it takes place in the small onscreen window, but you can modify it to run smaller (in case you had a slow system back in the day) or make it run almost full screen, which causes the interface to disappear every time you move. There are numerous places you can point out issues, like the occasional 2D bitmap instead of a 3D model, or the texture warping when looking up or down, but these are more than forgivable considering the era.

You switch between “Investigation” and “Movement” modes with the space bar. In Investigation mode, you stand still and control the cursor to interact with the environment. In Movement mode, you use the mouse to walk around, and use the keyboard to look around. It’s a bit awkward, especially for anyone used to FPS controls, but it’s only really a problem in the one section where you infiltrate an office, and need to avoid the constant patrols of security robots. There’s also a quick-travel option, which lets you visit almost any accessible area instantly, provided you aren’t in a dangerous situation. 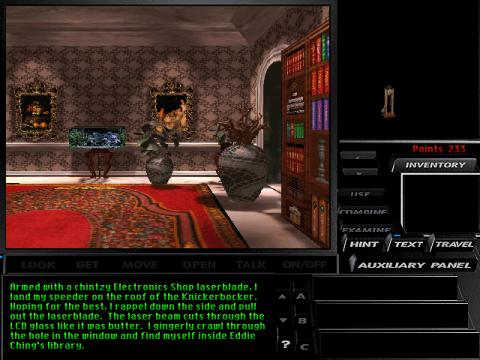 The biggest problem is one found in most adventure games but taken to an extreme – instead of combing a few simple 2D screens hunting for objects, here you’re stumbling around for a few steps, sweeping the screen, then walking again, repeating until you’ve fully explored the area. Most of the puzzles really aren’t that difficult, but there are lots of sticking points because you just simply can’t find the required objects. Thankfully, the cursor will automatically highlight items you can pick up or use, so you don’t just have to click everywhere.

Under a Killing Moon also realizes that its potential audience – people with new PCs that wanted to show off the CD-ROM FMV technology – might not necessary be into the actual puzzling solving aspect of the game. Therefore, there’s an extremely nice hint system built in, which keeps tracks of your current progress and will give you direction towards your next step. Every hint will deduct from your score, but there’s rarely a shortage of points, so it’s reliable as long as you don’t use it haphazardly. If that weren’t enough, the game comes preloaded with an “Easy” profile, which includes save games for every chapter. Although it’s certainly not the best way to play the game, at least it lets you skip some of the more annoying segments (the office infiltration, the shell game) if you just want to get on with the story. 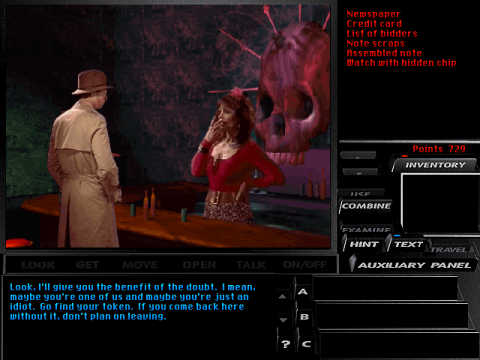 The dialogue events are handled very similarly to Martian Memorandum. Whenever you meet a new character, you need to complete a dialogue sequence before you can interrogate them. Instead of displaying your exact dialogue choices, though, you’re given one of three “attitudes” that determine how Tex responds, all of which change given the situation. Like Martian Memorandum, a lot of these just come down to guessing the correct responses, and retrying from scratch until you stumble upon the right order, but they’re rarely too obtuse.

The full motion video looks remarkably decent too, especially when other FMV games tended to suffer from dithering, compression artifacts, or annoying interlacing. It’s a little choppy, but also remarkably crisp, because the actors are independent from the background. Like a lot of FMV games, there aren’t any physical sets and all of the scenes are computer rendered, which looks cool in real time but perhaps a bit dated in stills.

But one of the greatest strengths is that the developers knew not to go overboard with the video. In The Beast Within: A Gabriel Knight Mystery (released over a year later), there are whole conversations that go on for five straight minutes, with little interaction other than occasionally clicking new topics. Under a Killing Moon makes sure its movies are direct and to the point, and thankfully lets you skip through dialogue line by line, where a lot of other games either made you watch the whole scene, or skip it in its entirety. 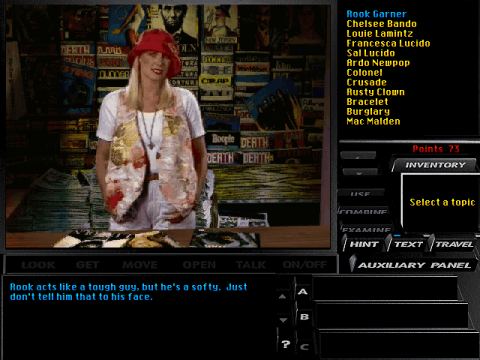 It’s far more than just the technology that makes Under a Killing Moon so intriguing and it’s mostly because Tex’s personality is far more fleshed out. You got hints of his voice from the lengthy monologues before each location in the earlier games, but here he’s a jaded, sarcastic, slightly goofy yet remarkably likable protagonist. A lot of this has to do with Chris Jones’ portrayal of Tex – it’s pretty clear that he’s not a professional actor, and can’t really pull off the whole “tough guy” act. But he brings the subtle swagger of someone who really wishes he were a tough guy, and that’s the whole part of his charm. His internal monologues, spoken with an echo, are routinely hilarious, even when commenting on the most mundane objects.

There are tons of details in each room, and like most adventure games, part of the fun is just looking at everything and seeing what kind of silly comments you can elicit. Look at a fire extinguisher and Tex reveals that it’s actually painted on by the cheapass landlord to fool the one-eyed building inspector. Check out the chair in his office for a brief flashback of Sylvia awkwardly trying to seduce the upholstery repairman, and failing rather hilariously (all right in front of Tex, too). Look at a piano and see him pathetically try to tap out a tune. 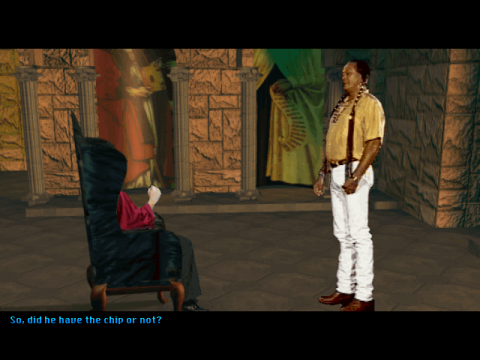 Most of the actors are played by unknowns, with the “big talent” names consisting of Brian Keith, Margot Kidder, and Russell Means playing minor roles. (This isn’t including James Earl Jones’ voice overs, which are brief but funny.) The weird thing is, they actually do a pretty decent job. If the whole thing had been played straight, it would’ve been a disaster, but since it everyone involved seems to realize that it’s essentially a C-level production, they ended up having a lot of fun, and it’s mostly free of the cringe-worthy acting that tends to plague FMV games.

Since the game came out on four CDs, there’s lots of annoying disc swapping whenever you jet from location to location. Thankfully, Access built in functionality for people with multiple CD drives, which was practically unheard of in 1994. With today’s massive amounts of hard drive space, though, you can just copy your CDs to a local drive and then map them in DOSBox, eliminating the need for any swapping. Very handy!