Since Shadowgate found most of its success due to its NES incarnation, it made sense that it would stay in the console realm for its sequel. What didn’t quite make sense is how ICOM ended up producing the game for the TurboGrafx-16, a system with not only low market penetration, but very few non-Japanese developed titles. (ICOM developed a few other games for the system, mostly notably the sidescroller Shape Shifter and the embarrassingly ‘90s skater action game Yo, Bro.) 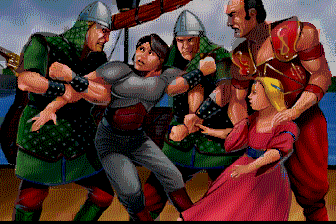 The intro recounts the ending of the first Shadowgate, wherein the Warlock King is defeated and cast into the depths of the Earth. It then fast-forwards to the hero’s descendants, the King Adam and his son Prince Erik. The Prince leaves for a journey, and expects a warm welcome home… only to discover that his father has been murdered, and he is the prime suspect. Erik must escape from prison, explore the land, and make his way back to Castle Shadowgate to confront the King’s true killer, and save the land from darkness. 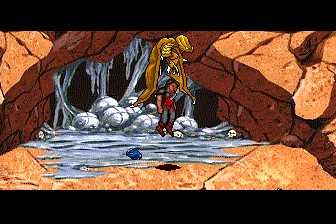 Since Beyond Shadowgate was developed specifically for the console audience, the first person perspective has been ditched in favor of a more traditional third person perspective. You control Prince Erik directly with the controller and hit the Select button to bring up icons to examine, use, or talk to various people. While still an adventure game at heart, it also introduces some action elements, once again probably to suit the audience. This means that most enemies are killed by attacking them directly rather than using any items. Prince Erik moves very slowly, and can only punch and duck. It’s remarkably clumsy, although most enemies can be beaten by simple exploits, like approaching them from a specific angle, putting on the autofire, and smacking them until they die. There is no health bar on screen, but you can only take a few hits before keeling over dead. Thankfully, your health is replenished whenever you leave the screen, and you can save at any point. 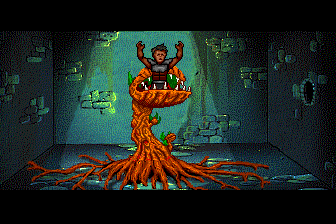 After escaping from the dungeon and working your way out of the caverns beneath it, you’re free to roam the land, doing good by saving fairy princesses or freeing a burning town from an onslaught of invading demons. In this section of the game, you can explore the land to find gems or take on other quests which can earn you cash to buy important items. Some of these quests or items aren’t essential to beat the game, but there are three different minor variations on the ending, depending on which items you’ve obtained. Although the expansive land and freeform exploration lend a welcome sense of adventure, the world is perhaps a little bit too big and empty… or maybe it’s just that Erik walks so damned slow. There’s a lot of backtracking to be done, and it’s annoying to have him slog so slowly through scene after scene of empty forests. It is also technically possible to screw yourself over by missing certain items, or killing an essential NPC. 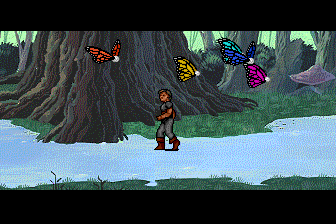 At least it’s an excellent-looking game. The animation is extremely fluid, and the 256-color scanned backgrounds, while dithered, rival the Sierra games of the time, which were only available on computers. It’s one of the few titles that make use of the TurboGrafx-16’s expanded resolution, running in 336×224 rather than 256×224. The CD format is put to use with redbook music, which lacks the dramatic flair of the NES game but is appropriately moody. All of the dialogue is voiced as well, and while it’s not particularly noteworthy, it’s also not completely embarrassing. The intro and ending are all done with painted stills in a standard Western fantasy style, which is a welcome change from the usual anime cinemas found on the system. 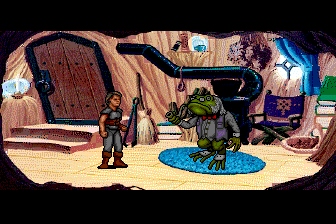 While it has its ups and downs, the biggest fault is that it just doesn’t feel like a successor to Shadowgate. Part of its essence revolved around its inspiration from text adventures, and without the off kilter descriptions, it feels fairly generic. What little writing there is comes off flavorless, although there are random scattered bits of humor. The invading demons attack with weapons that look like bagpipes, for some reason or another. And in addition to defeating the final boss with either an enchanted sword or the Staff of Ages – the same item used in the first game – you can also use a simple old paddle ball toy. 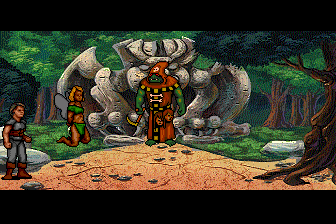 There was never much of a backstory to Shadowgate to begin with, and what this game does supply is largely uninventive. Sure, there are a few references to show that the developers were aware of its source material. In the original Shadowgate, one of the rooms made mention of the bricks being carved from stone from the dwarven mines, which you get to visit in this game. You also meet the wizard Lakmir, the one that’s mentioned in the intro text as giving you your mission. There’s also a twist on an old scenario – early on, you find a woman chained to a wall in the dungeon. In the original game, this woman would turn into a werewolf and kill you if you set it free. In Beyond Shadowgate, it will also turn into a demon… except it will run away and save your butt later on down the line. 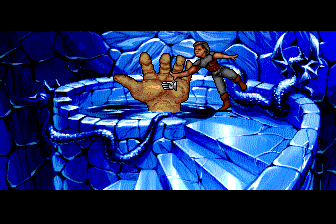 If there’s any major aspect that’s actually carried over, it’s the obsession with death scenes. In addition to getting killed in combat, there are numerous other insta-death scenarios, including getting devoured by a man-eating plant, skewered by a wyvern, chomped by poisonous mushrooms, and demolished by falling boulders. Many of these are quite gruesome – when a rock falls on your head, you can visibly see your eyeballs flying out – but without the descriptive text, they lose a bit of flavor. 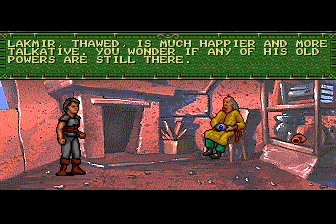 So, as a successor to Shadowgate, its sequel comes up a bit short. It’s too meandering, and its action elements are mostly unwelcome. Still, visually and aurally, it stands well next to PC titles of the time, and is certainly a much better technical achievement than the adventure game ports on the Sega CD, which were plagued with crappy visuals and long loading times. It’s an incredibly rare title to get a hold of, although it’s an interesting curiosity for fans of the old MacVentures. 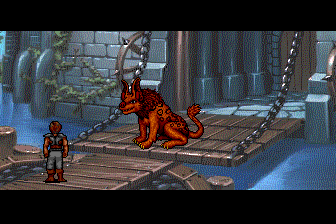