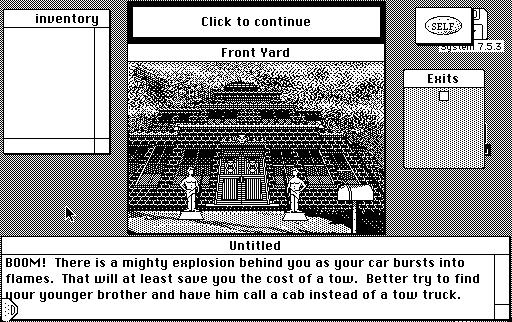 LOOK OUT! The last thing that you remember before the darkness rushed up to claim is your brother’s startled cry. You managed to swerve around the shadowy figure that appeared in the roadway, but lost control as the car jumped the shoulder and plunged headlong into this tree. 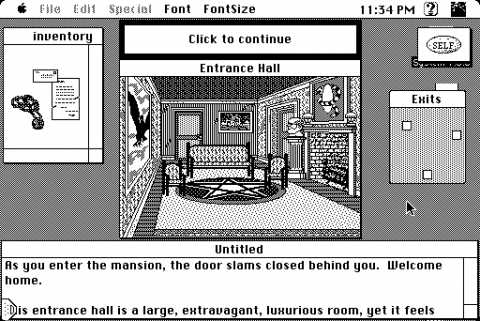 And so begins Uninvited, as you wake up in the driver’s seat of a wrecked car, in front of a spooky mansion. The car explodes, and, assuming you make it out in time, leaves you quite stranded. Your sibling, however, has completely disappeared, presumably having wandered inside of the house. With nowhere else to go, you open to front door and step inside, only to have the door suddenly slam shut behind you. The only option is to find your sibling and get out alive by delving into the underground caves beneath the mansion and destroying the sealed body of the wizard Dracan, who, despite being kept in a near-permanent sleep, can apparently still cause quite a bit of trouble.

The mansion in Uninvited consists of about a dozen rooms, along with a backyard, which holds a chapel, a greenhouse and a magistratum. Like the other MacVentures, it’s not a terribly long game, nor is it particularly difficult. It’s the only ICOM game to have a maze sequence, but it’s pretty easy, as far as mazes go. As can be expected, the house is quite haunted, filled with specters and other various monsters, all remnants of some kind of horrible circumstances from years prior. Most of the plot is related through the letters strewn about the mansion, as well as told by the ghosts themselves, who will occasionally show up to taunt you, and if you screw things up, enlist you to dwell amongst their ranks. So, when that ghost appears from behind the jail cell? Don’t open it and follow him in unless you want to get trapped forever. Despite all of the insta-kill situations found herein (and other ICOM games) there’s a single location where you can attempt to enter a pit, and the game will warn you several times of a giant spider. If you keep insisting, you’ll eventually climb down and… well, what do you know. It’s a giant spider. 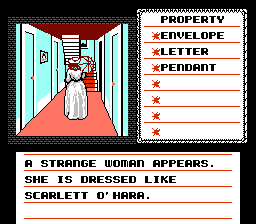 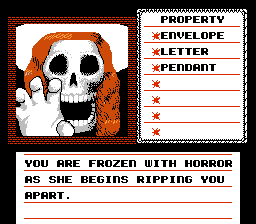 The most infamous ghoul in Uninvited, featured on the cover of the NES version, is the lady dressed like Scarlett O’Hara, encountered in the opening moments of the game. She seems innocuous enough when viewed from behind, until she turns around and reveals a face totally devoid of flesh, and then summarily begins ripping you apart with her bare hands. It’s here where the text-based nature of the game is really effective, sending unnerving images down your spine without actually showing any of it to you. That being said, while you won’t see yourself being mutilated, you will see close-ups of whatever horrible being is doing the killing. The later creatures are quite creepy too – you’ll run into zombies, several kinds of ghosts, and a particularly strange creature which appears to be a giant, grinning tomato. On a less dangerous note, you’ll also find a grinning, dancing red goblin running around, a being so silly looking that the narrator begins to question their sanity.

There’s a sense of general spookiness from exploring the mansion. It seems plain enough, filled with fairly mundane rooms with an old fashioned decor. Yet there’s always the sense that there’s something worse lying beneath it all, and of course, there is. Although there is a “Speak” action, it’s really only to chant magic spells, as there’s no one to actually converse with. It’s an isolating experience, and it’s these moments which earn Uninvited its rank next to Infocom’s The Lurking Horror as one of adventure gaming’s earliest horror games, paving the way for Alone in the Dark and Silent Hill years later. 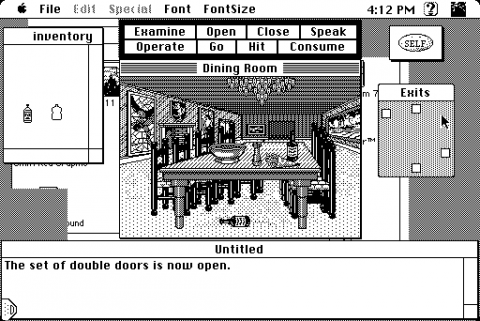 The quality of the home computer ports is the same as Déjà Vu, since they all use the same interface on their respective platforms. The Mac, Atari ST, Amiga and Windows versions use sound effects here and there, including an amusing “I’ve Got You!!” voice sample whenever you’re killed.

The NES version of Uninvited was the third NES port to be released, after Shadowgate and Déjà Vu. Again, it uses the same interface, and has a very similar style to the others. This time the text is spelled out by a crawling spider. In the computer versions you would occasionally find magic words to call upon spells, like the address book in Déjà Vu. Specifically, you needed to combine several words together to make a full sentence, and thus a full chant. This feature has been completely simplified into a “Spell” page in your inventory, which is automatically populated when you read a scroll. Most of the magic words have been given new, rather weird names, and some of the puzzles are slightly altered to accommodate this. For instance, in the computer versions, you only need to “Speak” to the doll to converse with it. In the NES version, you need to read a scroll to learn the “DOLLDOLL” spell. There’s also an additional spell which can be used to teleport outside the maze, saving some rather annoying backtracking.

The computer versions of Uninvited have a hard time limit, so you need to beat the game in a certain number of moves or else you’ll become possessed by the evilness of the house. In the NES version, this only happens if you grab the ruby, which must be discarded after a certain number of turns in a specific spot and serves no functional purpose besides killing you. If you do manage to grab it, the game will also never specifically tell you what killed you, which is quite frustrating if you’re not in the know. The NES version is the only version to have a full soundtrack too. It’s pretty good, although not as catchy as the music in Shadowgate or Déjà Vu. For a neat Easter egg, play the Victrola in the parlor and you’ll hear the first few notes of the Shadowgate theme. 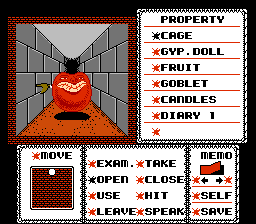 The sibling you need to rescue was changed from an older brother to a younger sister. A cross was changed into a goblet, due to Nintendo’s censorship policies. The mail was formerly addressed to one “Master Crowley, 666 Blackwell Road, Loch Ness, Scotland”. In the NES version, the address and location was removed, although it still keeps the reference to Master Crowley, an allusion to occultist Aleister Crowley (and Ozzy Osbourne’s associated song). In the tower, you’ll also find a ghost who holds his decapitated head in his arms. The head was reattached for the NES version. The coloring of the pentacle on the floor in the living room was also altered to look more like a standard five-pointed star. You also cannot enter the mansion until you open the mailbox and get the pendant, which is required to beat the game. This isn’t mandatory in the computer versions, and thus allows you to enter into an unwinnable situation mere seconds into the journey. 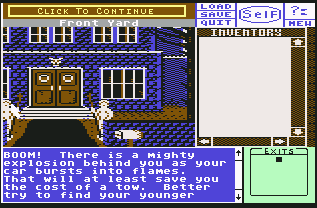 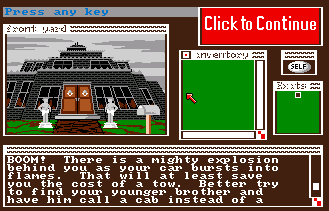 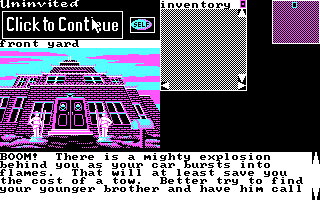 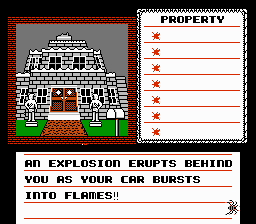 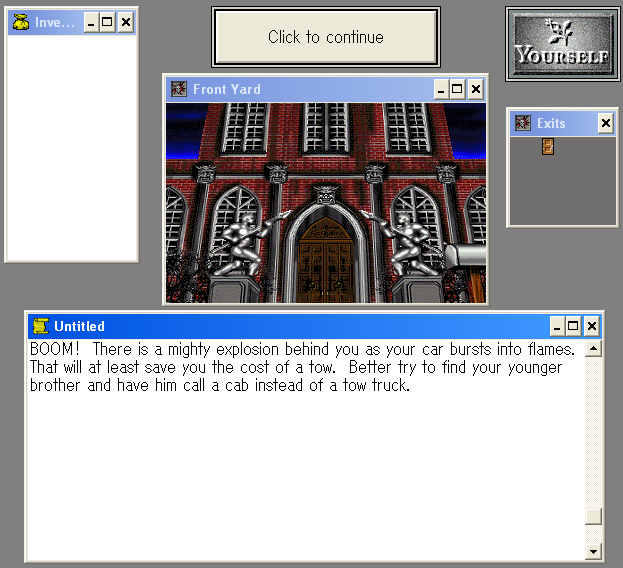