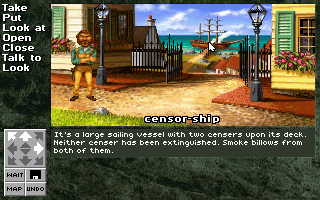 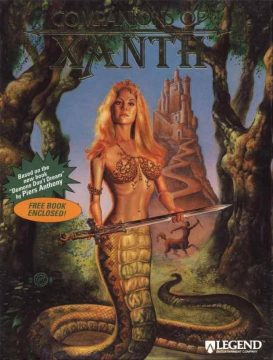 This is a brilliant little tie-in. Based on Piers Anthony’s Demons Don’t Dream, the sixteenth book in his massively popular Xanth series tells the story of two young humans who visit this mystical fantasy world via a computer game. The book calls this game Companions of Xanth. A year later, Companions of Xanth was released… for real! And it was developed by Legend Entertainment, who would eventually become known for their quality adaptations of various book series. You’ve read the book, it told Xanth fans, now play the same game that they were playing!

Indeed, it’s a bit meta to be playing a game called Companions of Xanth, which starts you in front of a computer, with a game package called… Companions of Xanth. In the game, you are actually Dug, a sixteen year old with a girlfriend and a general disinterest in stupid fantasy games. Although Dug is initially reluctant to play, he’s drawn into a competition to cross the land of Xanth and find a magical artifact. He’s not alone, though – another Mundane (the term for humans from the real world) named Kim is competing with him for the very same prize. The two are only told is part of some cryptic “Game”, but they don’t realize that the fate of Xanth lies in whomever can reach the end first.

Getting acquainted with the game is certainly easy enough. Legend Entertainment was founded to continue the legacy of text adventures, and did everything in their power to make them palatable to (then) modern gamers. Graphics! Automaps! A menu driven interface that lists all possible verbs and nouns! But despite these efforts, by 1994, certain business realities dictated them to finally give up the ghost and go with a completely mouse driven parser. Companions of Xanth is the first game to use this interface, and refinements were used in all successive games. It’s remarkably user friendly, while keeping many of the major elements of text-based games. The whole adventure is played from the first person perspective, with a list of verbs on the left side of the screen. The visual animation is very sparse, and many actions are simply dictated through text. You can double click on anything on the screen to interact with them, although picking any object will also bring up additional context sensitive verbs (such as “push” and “pull” for a lever.)

Although you can technically point on the screen to move, it’s much easier to use the compass on the side of the screen, which illustrates all available exits. Like the older Legend games, there’s also an automap option which replaces the main visual window, which is extremely helpful for a maze sequence that would otherwise be maddening. There’s also a Wait command to pass time, and an Undo command, handy for when a certain ill thought action leads to death. The 256 color VGA graphics are pleasant, if a bit bland. The MIDI music is much the same, and largely unremarkable. The CD-ROM version includes full speech for all of the dialogue, although all of the narration text is unvoiced. 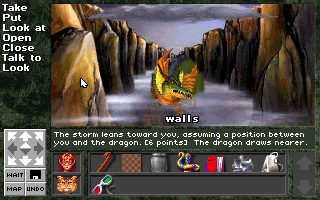 Once introduced to the game, you’re given the choice of four different companions: Nada Naga, the sexy serpentine princess; Jenny Elf, a young girl who’s accompanied by the clever Sammy Cat; Che Centaur, the magical horse creature; and the Demoness Metria, who appears to have stepped out of a 50s pinup magazine. This selection is a bit of nasty ruse, because there’s only one correct answer. All you need to do is look at the box artwork (or read the book) to see that you’re supposed to choose Nada, but all of the rest will get you killed almost immediately after transporting to Xanth. What a sham – it’s no fair to call it “Companions of Xanth” when there’s really only one. At any rate, a Companions job is to provide advice to the Mundane, so Naga is on hand to point you in the right direction, and occasionally solve certain puzzles, if you ask her nicely enough. Her presence allows novice adventurers to jump in and enjoy the game without it becoming too difficult.

Once you get everything squared away, you and Naga meet up with Kim and her Companions – she chose Jenny Elf. Any time you run into them, they’re animated via live digitized actors. This was a terrible choice, because it looks awful and clashes with the art style, but such interludes are rare. At this point you learn that you are represented in the world of Xanth by a computer screen. It’s only when you truly learn to believe in magic (i.e. after a certain plot point) that your physical presence in transported, thus allowing full interaction with the denizens of Xanth.

The game takes uses the same exact setup as the book, and features a handful of its major events, altering some minor things to make them work in the context of an adventure game. However, huge chunks of the game are also entirely original, leaving out characters and locations from the book and adding in completely new elements. The biggest change, though, is that the book focuses on both Dug and Jenny, alternating between chapters, while the game focuses almost solely on Dug, with only occasional glimpses to Jenny’s adventure. The ending is mostly different, as well. The boxed release of Companions of Xanth includes a paperback copy of Demons Don’t Dream as a bonus.

In many ways, Xanth is a typical fantasy universe – there are even four regions based on each of the classical elements. What sets it apart from dozens of similar universes is its light-hearted nature, and affinity for puns. Some of them are actually pretty funny – in the first major quest, you need to stop the censor-ship, a boat that makes it impossible to swear. (The CD-ROM version greatly enhances this section, if mostly because the parts where the text simply reads “(bleep)”, the voice actor fills in with dialogue like “g*d damn mother f**king c**k sucking *** licking”.) It also requires some lateral thinking, the kind that adventure games are more or less made of. You find some medicine called Pain-B-Gone, which in turn can be used to make a window pane disappear. Most of them are clever, some are painful, are puns are known to be. Take the part where you need to get rid of a dog made of lava. You need to ask Naga to tie her air into a bun, then garnish it with mustard. The dog runs away for its life – the text descriptor calls him a “hot dog”, you see. (Pause for groan and facepalm.) 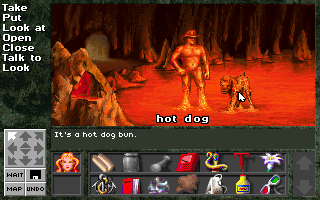 Though there are the usual stock fantasy characters – ogres and trolls and what have you – but there’s enough of a twist to make them interesting. The stereotypical bridge troll lives in a fully furnished modern house, for instance, and one puzzle is a game of wits with Com-pewter, an evil electronic device that feels anachronistic against the rest of the backdrop, but provides a bit of character. Certain inanimate objects are also sentient (though not necessarily intelligent) and at least a few puzzles can be solved simply by talking to them.

Companions of Xanth is perfectly playable – and enjoyable – if you don’t have any experience with Piers Anthony novels. But there are numerous characters and references to the expansive series, and having familiarity with its background will definitely add to the enjoyment. For those without the fortitude to remember fifteen books worth of back story and world history, an item called the Com-pendium of Xanth provides all of the most relevant stuff. Referencing this is also required to beat a few of the game’s more tedious puzzles. 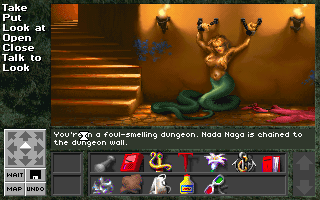 For all the times when it tries to welcome Xanth newbies, there are still some holes here and there. The most glaring comes when Naga is captured, and you have to free her from her chains. She’s in her half human, half snake form, unclothed from the waist up with strategically placed hair. You can’t look at her – well, you, the player can technically look at her, but you can’t click on her and pick any dialogue that might infer that you’re peeping, or else Naga will get pissed and resign as your companion, causing you to lose. Rather nasty and sudden, yes, but it makes a lot more sense in the book, which goes to great lengths to explain that Nada Naga’s greatest liability is her “princessly quality”, which generally means that anyone who isn’t her husband can’t see her naked. Dug tries this in the book and almost gets kicked out of the Game, per the rules of the Xanth universe, so at least that makes more sense, stupid as it may be. At least the game acknowledges the silliness of this fan service, and just a few screens after the awesome naked chick, you get a whole screen devoted to a fully nude fireman. (Literally, as expected – he’s made of lava.)

But this also points to the biggest flaw of Companions of Xanth. No offense to Mr. Anthony, but his writing has always been a bit on the juvenile side. The book can barely talk about Nada Naga without discussing her ample tits, and it shouldn’t be surprising that the previous novel was called The Color of Her Panties. The game reels this back a bit, but it still keeps the rather simplistic style. Its straightforwardness makes it easier to get into than, say, Robert Jordan or JRR Tolkien, but since the game apes Anthony so closely, it’s missing much of the eloquence and wit that mark many of Legend’s other games. As such, the quality of the source material renders Companions of Xanth one of the weaker of the company’s titles, even though it’s still a worthwhile adventure. 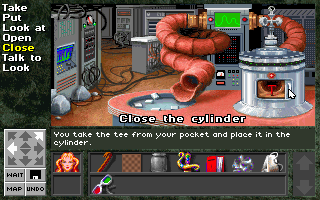 In addition to its initial disk and CD releases, the CD version is also found on The Lost Adventures of Legendcompilation, which also includes all of the companies’ earlier text adventures. Legend planned a second game in the series, advertised as “Magic of Xanth“. A promotional booklet indicated that it would star Humfrey the Magician, but little else was ever revealed before the company was bought and tasked with creating FPS games.