Mappy Land, the first Mappy game developed exclusively for the console audience attempts to greatly expand on the original, with a larger variety of levels and different mechanics. The story focuses on Mappy’s attempts to woo his lady friend, Mapico.

Although the basics of Mappy Land are similar, there have been substantial shakeups. There are no longer any doors, and while trampolines still exist, there are also ladders to climb up and down. The level design is also not quite as rigid, as some platforms have dead ends.

The goal is still to obtain a certain number of items in each stage, which allows you to move onto the next. With the doors gone, instead you can defeat enemies through the use of unique traps spread throughout, including punching bags, zip lines, cannons, and others. 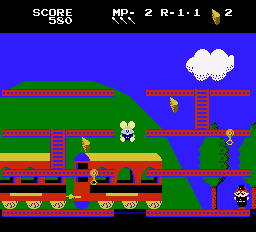 You’re also armed with assorted items that can be used to temporarily distract foes. Cat toys are the most prevalent, and work on standard Mewkies, but will be ignored by Goro. He can be distracted with a coin, since he loves money. Fish are the most useful, since they’ll lure both kinds of enemies. There are also jars that are supposed to be like catnip, which tire out all of the Mewkies (but not Goro). These items are peppered throughout the stage, but are not replenished after each stage, so it’s generally better to stockpile them for the later stages. They tend to pop up after collecting other items, giving you an incentive to run around the stage a bit. One stage has fish jumping up the water, so you can happily sit by and farm as many of them as you want, time permitting. Unfortunately you can’t select which item to use – the game automatically activates whichever was the last item you collected – so you might end up wasting a few of them until you get to the one you want.

There are eight unique levels, which loop four times, for a total of thirty two levels. At the end of each loop, there’s a quick bonus stage where Mappy must reach his beloved Mapico within a time limit. Thankfully, you don’t lose any lives if you’re too slow, you just get an irritated message from Mapico admonishing that you’re late, and must retry the stage until you get it right.

In subsequent loops, the items you collect change. In the first loop, you’re grabbing bits of cheese, but in later loops you’re nabbing assorted other items. It’s a cute effect that Mappy’s adventures are basically going through the stages of a relationship, courting his girlfriend with presents, grabbing rings for his engagement, collecting trees for a Christmas party and then collecting baseballs for his young son. 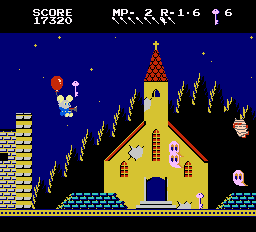 While the levels are essentially the same in the later loops, there are still some minor alterations in some of them, beyond just making the enemies more difficult. For example, in the third loop of the first stage, you need to enter one of the train cabins in order to find extra items. Other levels are similar, with substages that must be explored in certain loops, but not others. It lends some variety, but it’s still a little obtuse. If you collect all of the items and find that the exit simply won’t open, there’s a substage somewhere that must be opened, but the entrances are never properly highlighted, so it’s just a matter of stumbling around until you find it.

Most of the levels follow the standard Mappy stage construction, but a couple of them try to spice things up by adding extra platform elements. The third level, the jungle, is short, and consists mostly of vines you can climb on and moving trampolines. Unfortunately the controls are too rigid, and Mappy’s new jumping ability is borderline useless, so these stages ended up being the weakest part of the game.

The graphics hail back to the early Famicom days, when the artists hadn’t quite figured out how to work around the constraints of the platform and develop attractives sprites. The characters are larger than the arcade title, but the whole game has an ugly, box look to it. But these are somewhat negated by the little details that add a substantial amount of personality. Primarily, the animations of the Mewkies bouncing around the cat toys, throughly entranced, is simply adorable. Additionally, in each stage, Goro is dressed up in an appropriately themed outfit. He’s a train conductor in the first stage, he has a Polynesian grass skirt in the island level, he has a Snidely Whiplash villain mustache in the Wild West stage, he’s a ghost in the graveyard stage. And pummeling enemies off the stage never stops being comical. 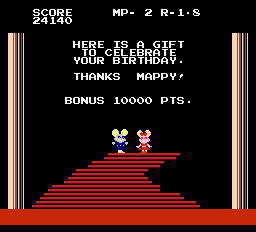 There are a lot of really great touches that give some unique character to the game, something which was fairly uncommon back in 1986, and shows how devoted Namco was in creating a world with a silly, likeable cast, even if most of them were enemies. But none of this really negates the fact that, despite all of the refinements, the core gameplay feels watered down.

The original game relied on a few mechanics that needed to be mastered and exploited to get high scores, but there wasn’t much variety in the levels. This works fine for arcade games, but this was the era when console titles were getting longer and more involved, and needed to compete with the likes of Super Mario Bros. In the processes of expanding Mappy into a longer form game, they succeeded in adding more variety, but losing most of the tightly designed mechanics that made the original game so addicting. After all, unless you poorly mismanage your items, you’re never really trapped, and the level designs are so open that it’s much easier to navigate around enemies. Without these pressure, something ends up lost.

Overall, Mappy Land is an interesting example of an arcade developer attempting to adapt to an evolving gaming landscape, and not quite getting it right. It’s still a fun, likeable game though, and one that’s probably more appropriate for younger gamers anyway, since it’s not as immediately difficult as the first game.