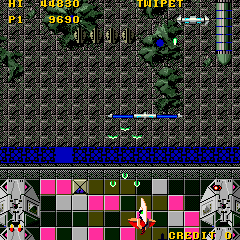 Pretty much every major Japanese developer in the mid-80s had their Xevious clones. Capcom had Vulgus and Exed Exes. Konami had TwinBee. Data East, meanwhile, had B-Wings (short for Battle Wings). In B-Wings, your ship could equip numerous attachments with assorted types of weaponry. Data East took this concept and iterated it with their next title, Darwin 4078. While B-Wings was relatively successful, it was with Darwin that they broke out and obtained greater cult popularity within the shoot-em-up genre.

The title, of course, refers to Charles Darwin and his theory of evolution, which forms the basis for the game’s power-up system. You control something that’s less of a spaceship and more of a… strange being, which in its default state sort of resembles a gigantic squid, minus the tentacles. In this initial form, the creature/ship is called Beas.

Certain types of enemies drop “Evol” power-ups, which will evolve your ship into a different form, each of which has its own speed, size, and primary weapon. However, you need to keep collecting these items – if you go too long, you will devolve into a previous state. If you get hit by enemies, you’ll drop down to the lowest form on the chain, a sad little thing called Pister. The game is kind enough to start you off on the second rung on the ladder, so at least you can absorb a single hit from a bullet (though not an enemy collision) before getting killed.

This creates a lot of weird situations where you need to keep evolving, regardless if you want to change form or not, lest you find yourself too far down the chain. Just because a form is more evolved, though, that doesn’t necessarily mean it’s more useful. Typically they do have stronger weapons, but they can also be slower, with larger hitboxes. Unfortunately, the game doesn’t let you know how long you have in your current form, leaving you to either guess or count on your own.

There are 19 total forms, though in the normal course of grabbing Evol power-ups, you’ll probably only see about half of the them. The rest are obtained through assorted weird tricks. For example, there’s a whole secondary evolutionary branch which is found by reaching a certain form, intentionally letting yourself devolve by running down the timer, and then grabbing another Evol. This will reveal several more forms, with the final one being a bird-thing called Deame. If you then let yourself get hit by a bullet, you’ll unlock the ultimate form, a Black Deame, which floods the screen with vicious dark wings and is almost invincible, unless you fail to grab any more Evol capsules. There are a few other hidden forms, including an energy ball named Suppurate, which are found through other means, usually by getting hit by certain enemies or at a specific point in the evolution cycle.

While all of the different evolutionary forms will affect your main gun, none of them will change your bombs, which are weak and hard to aim. Instead, these are strengthened by attacking certain enemies and then docking with them once they’re disabled. It’s a little unusual and difficult to pull off, but it adds a to the depths that lie underneath Darwin 4078‘s surface.

Beyond the evolution system, another note-worthy key point is Darwin’s visual style. It’s really, really bizarre, and not in the same way of comedic shooters like Parodius or TwinBee, which featured weird objects like penguins or musical equipment. It’s unusual in that almost nothing in this game looks like anything or any place that exists in the real world. Most of the levels are fought over garish blue or brown backgrounds, with landscapes that don’t look like much of anything.

Some of the enemies are based off of microscopic organisms, but others are just baffling, including the bosses, which look like electric razors that have had insect wings glued on. The inexplicable nature of the design adds to the game’s charm, but it’s also hard to look at for any extended length of time. There are only a few songs, as well, both similar in melody, and they too, grow uncomfortable to listen to over the long run.

Darwin 4078 is primarily the work of Tomo Furukawa, who designed the game, as well as drawing the visuals and composing the music. He later went on to form the J-rock visual kei band Guniw Tools, where he was both the vocalist and producer of their music videos.

The nature of the evolutionary power-up system ultimately makes Darwin 4078 feel weird and unbalanced compared to competing shooters of the time, like Toaplan’s Twin Cobra or Capcom’s 1943. As a counterpoint, it’s also a lot more ambitious on several counts, so it still holds up today in its own bizarre little way.

Darwin 4078 was ported to the MSX2 by Hudson. It’s a decent port, with smooth scrolling, a wider playing field, and detailed backgrounds, though monochromatic sprites. A PC Engine port, also by Hudson, was developed but not released. 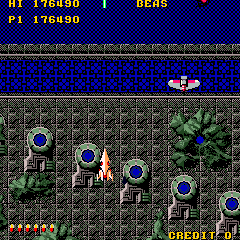 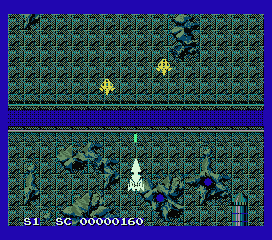